Mistakes happen, but these mistakes may affect how you see your favorite films.

Small gaffes can be found in just about any movie. But these are mistakes that go above and beyond in their potential for ruining your viewing experience. Climactic scenes ruined, period dramas with modern technology and even crotches have become the stuff of cinematic errors.

Spoilers below, by which we mean, these goofs will spoil these 11 classics for you.

1. The cowboy in the last scene of "Pirates of the Caribbean."

On the left! Just as Captain Jack Sparrow commands, "On deck, you scabrous dogs," a "cowboy" can be seen over his shoulder just looking out to sea. Presumably this is a crew member who was supposed to be out of the shot, but how this made it into the final scene of "Pirates of the Caribbean: The Curse of the Black Pearl" is inexplicable.

That said, pirates versus cowboys could be a good movie in itself.

2. The Stormtrooper who hits his head in "Star Wars."

This bump from "Star Wars Episode IV: A New Hope," is a classic movie mistake and one that's deeply entrenched in "Star Wars" lore. George Lucas even later tried to reference the bump in the 2002's "Star Wars Episode II: Attack of the Clones," by having Jango Fett bump his head. George Lucas implied that the later Stormtrooper is a clone of Jango's and that all Stormtroopers have inherited a propensity to bumping heads. A "Star Wars" forum published Lucas' "Attack of the Clones" DVD commentary:

Throughout, as we go through the movie, there's all little funny moments like Jango bumping his head because in 'Star Wars,' one of the Stormtroopers bumps his head on the door as they leave the control room on the Death Star and I thought, 'Wouldn't it be funny if that's a trait that Jango has?' When he puts his helmet on and everything, he can't really see that well and so he's constantly bumping his head, and that trait gets cloned into all the stormtroopers and that's why they keep bumping their heads.

3. The gas cylinder on the back of a chariot in "Gladiator."

This mistake happens during a reenactment of the Battle of Carthage in the Colosseum. The dust settles on a fallen chariot and you can see the tank that may have gotten it to flip over.

"Gladiator" actually has quite a few mistakes, such as crew members in crowd shots and changing sets.

4. The baby raccoon that inexplicably teleports in "Bambi."

Apparently this has now been fixed in DVD versions, but on the VHS and original release, this baby raccoon would just disappear and reappear to the left.

5. The extra who runs to get help until she thinks she's offscreen, then looks back toward the camera in "10 Things I Hate About You."

Bianca accidentally shoots the gym teacher with an arrow. A student goes for help. Then that student just gives up. Hopefully that teacher was okay.

6. The bullet holes already present in the wall before the shots are fired in "Pulp Fiction."

This is another classic movie mistake, especially since the scene is so iconic. The error even messes with the plot, making it especially egregious.

Jules says, "We should be fucking dead" and "God came down from Heaven and stopped these motherfucking bullets," while inspecting the bullets' placement in the wall. Too bad the holes were already there.

7. The kid who covers his ears before the gun is shot in "North by Northwest."

On the right! Also a famous gaffe, this kid visiting Mount Rushmore seems to predict the future and knows a gun is about to go off.

8. The extra who fixes her fly for five seconds in the climactic scene of "Teen Wolf."

"Family Guy" even made a joke about this one, with a Yoda character claiming this was the best scene in the whole movie.

Many fans originally believed that this was a male extra exposing himself, but in versions with a taller shot you can see that the extra is a woman, and that white triangle is some sort of cloth.

9. The multiple white cars in the background of "Braveheart." 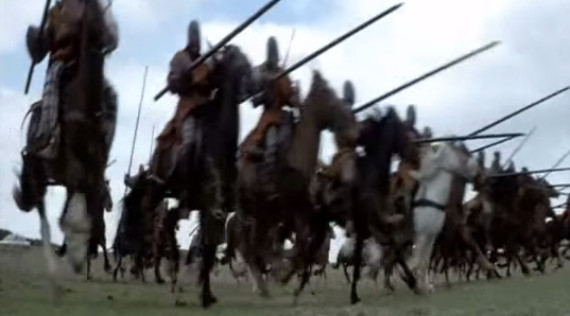 This actually seems to happen twice. The more noticeable moment occurs during a battle scene (pictured, blurry, above).

The other time is far less noticeable, but still certainly messes with the period illusion. After William Wallace leans in to kiss Murron's body at her funeral, he stands and a car can be seen driving in the distance over his shoulder.

This is certainly one of the biggest mistakes of all time, just because the camera is so obviously in the scene and its presence seems endless. (To be clear, this is the "Bad Boys" starring Sean Penn, not Will Smith and Martin Lawrence.)

11. The boy who won't stop signaling toward his crotch in "Back to the Future Part III."

The character's name is Verne Brown and he is played by Dannel Evans. Much speculation has taken place as to just what Evans is doing in this scene, but the consensus seems to be that he just had to go to the bathroom.

In the "Back to the Future" animated series, the character of Verne is actually a troublemaker. Perhaps this "mistake" is actually canon. But from the desperate look on that kid's face, it's doubtful. 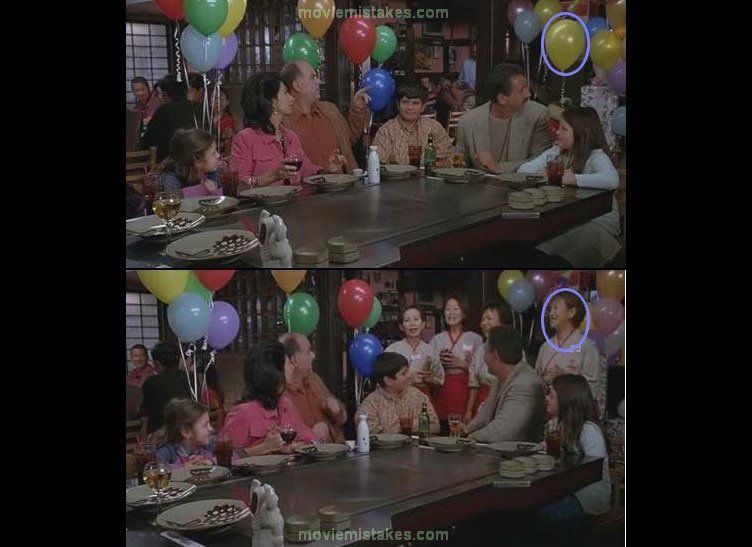 1 / 10
"The 40-Year-Old Virgin"
In a scene featuring a children's birthday party, having a different color balloon magically appear in place of another is totally forgivable. However, having an entire <em>person</em> replacing said balloon is not.