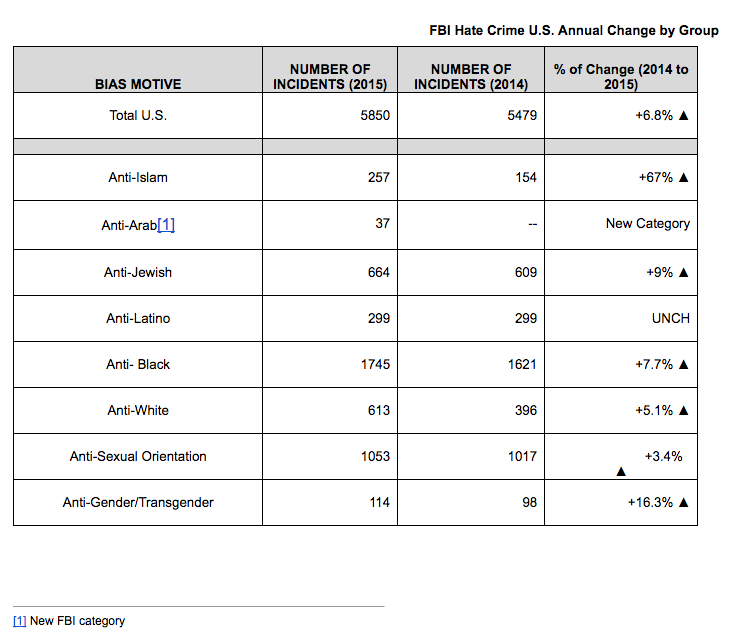 Numbers Rise, But State Compliance Varies
Criminal hate crime incidents reported to police increased 6.8 percent in the United States in 2015; according to official FBI data released Sunday. There were 5,850 incidents in 2015, compared to 5,479 reported in 2014, the widely anticipated report showed.

In contrast, in September the FBI figures for violent crime overall showed an increase of over 3.9 percent.

Bureau of Justice Statistics victimization phone survey data over the last decade has showed a wide disparity between their annual hate crime data, which has been averaging slightly below 300,000, and the FBI's data, which show under 6,000 nationwide.

Moreover, state reporting to the FBI is limited by a glaring lack of participation in the voluntary program by various states, including Florida, Pennsylvania, Mississippi, Alabama, Arkansas, and Hawaii among others. Maryland, the first state to collect data in the 1980s has an excellent program that reported 203 hate crimes, including 14 anti-Muslim crimes, in its official report released in September. However, only 41 made it into the FBI data.

Furthermore, while some groups like the Anti-Defamation League and our Center have served as models, some academic centers and advocacy groups that collect data have used poor vetting which fails to distinguish between criminal incidents and non-criminal, or they mislabel non-hate crimes as hate crimes. One university study inaccurately maintained that there were 12 anti-Muslim hate homicides, when some of those cited were robberies with no bias motivation.

The FBI anti-Muslim hate crime numbers for 2015 were right in line with original estimates released in September by California State University San Bernardino's Center for the Study of Hate and Extremism and reported in the New York Times, "The new study from Mr. Levin's nonpartisan group, based on official police reports in 20 states, estimated that there were about 260 hate crimes against Muslims nationwide in 2015." In the September study 4.5 percent of all hate crimes were directed against Muslims, again very close to the FBI numbers for the whole nation.

Other Hate Crime
Over half of all hate crime, 3,310 or 56.6 percent, was committed on the basis of race, 52.7 percent of which was anti-black and 18.5 percent anti-white. African Americans, who comprise 13 percent of the U.S. population, were the largest single group targeted for hate crime last year with 29.8 percent of all hate crimes directed against them. Anti-Black hate crimes rose 7.7 percent to 1,745 in 2015.

Most Agencies Report "Zero" Crimes
Since 2002, reported incidents have generally been in the 5,400-8,000 range. The number of agencies participating in the data collection effort (most of which reported zero) was 14,997 agencies, down from 15,494 agencies the year before. However, the number of agencies actually sending in incidents is a fraction of those listed as participating. An Associated Press survey found that about 16 states had 25 percent or more of their police agencies not submit any incidents at all for six years.

Some states that have consistently demonstrated poor reporting continued to do so in 2015. Mississippi, the state with largest percentage of African-Americans, the most targeted group, reported no hate crimes at all in 2015, while Arkansas reported only 5, Alabama reported just 10, and Iowa only 6. Hawaii, once again stood out as the only state not participating at all.

Most Hate Crime Directed At People, Not Property
The most frequent hate crime offenses were property destruction at 1,698 or 24.7 percent; followed closely by intimidation, 1,495 or 21.7 percent; and simple assault with 1,436 or 20.9 percent. Aggravated assaults accounted for 12.8 percent of all offenses with 882. One third of hate crimes were simple or aggravated assaults. In contrast, only 15 percent of overall crimes in 2015 were violent, showing that hate crimes are far more violent proportionately. Our Center counted 14 hate homicides in 2015, the highest in well over a decade, the FBI figures show even more,18, nationally, including the nine people who were murdered in the racially motivated mass shooting at Charleston, South Carolina's Mother Emanuel church in June 2015.

A hate crime is a criminal offense motivated in whole or in part by the actual or perceived group status of another, such as race and ethnicity, religion, disability, sexual orientation, gender and gender identity. The FBI tracks over 30 different types of bias motivations within the broad categories listed above. In 2015 the agency added new subgroups; anti-Sikh and anti-Hindu under religions, and anti-Arab in the race/ethnicity category. The Hate Crime Statistics Act was passed on April 23, 1990 and the first national study featured 1992 data.