WASHINGTON -- Mass shooting incidents are generally on the rise in America, according to FBI officials who have studied the topic. These events are usually over within minutes, often before police even arrive at the scene and long before heavily armed tactical teams have a chance to show up.

A new study released by the FBI on Wednesday focused on 160 "active shooter" incidents from 2000 through 2013, in which police were called to respond to an unfolding situation involving one or more individuals attempting to kill people. Incidents that resulted from gang or drug violence were excluded. The report covered both high-profile attacks -- including those in Aurora, Colorado, and Newtown, Connecticut, and at Fort Hood, Texas, and Virginia Tech -- and shootings that didn’t turn into nationally covered events -- like those at a cafe in Florida in 2010 and at a house party in the South Jamaica section of Queens, New York, in 2011. A total of 486 people were killed and 557 people injured in the 160 shootings examined. 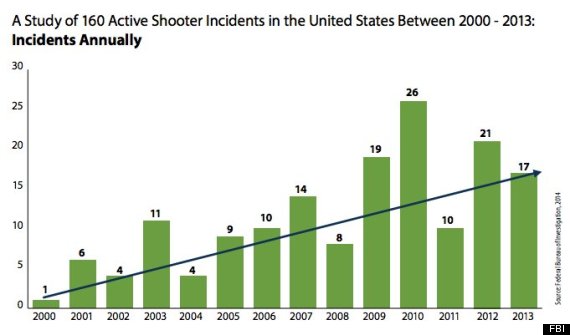 Overall, 66.9 percent of the incidents had ended before police even arrived at the scene and could engage the shooter. When they were able to engage a shooter, a law enforcement officer was killed or injured nearly half of the time, in 21 out of 45 incidents.

At a press briefing on Wednesday at FBI headquarters, officials suggested that providing tactical equipment to that first line of officers was essential.

"We now have tried to push out some of that equipment that we know is essential to the patrolman or at least the patrol sergeant, to get it out as far as possible, equipment previously that we just had tactical teams using," said James F. Yacone, the assistant director of the FBI's Critical Incident Response Group, who added some examples. "So, door ram. If you can’t get in a place, then you can’t stop the further loss of life. So a ram is an essential tool. Compatible radio systems ... are going to be key. Not just within the hierarchy level within those organizations, but right down at the troop level within those organizations."

The federal government has also sent billions of dollars worth of military-style armored vehicles to police departments across the country, but those vehicles rarely have any impact in active shooter incidents -- though officials did say they would be useful in response to a coordinated terrorist attack. J. Pete Blair, an associate professor of criminal justice at Texas State University and director of research at the Advanced Law Enforcement Rapid Response Training Center, could think of only one incident examined in which a heavily armed tactical team actually ended up engaging the shooter themselves.

"Generally, a SWAT team is not usually a quick response force," Blair told The Huffington Post after the briefing. "It usually takes them some period of time to spin up -- it may be a half-hour, sometimes longer than that." He said that SWAT teams would be useful in complex terrorist attacks when police were facing trained fighters, but that they had little to no impact on any of the active shooter incidents covered in the study.

"A lot of times the SWAT team can take longer to deploy than the actual event is going on, so a lot of times the SWAT will take a role in controlling the area, containing the area and then searching," Blair said during the briefing. "But it is the line-level patrol officer that is where the rubber meets the road here, and that is the person who would be going in to stop the shooter."

Given that first responders or bystanders are the ones who usually help bring an end to a shooting incident, officials said that getting some heavier equipment -- like extra ballistic vests, helmets and rifles -- out to police officers on the front line was important.

"There's been a lot of discussions lately regarding the appearance of equipment: Is it military-type equipment? The reality is most of those officers responding would prefer to be wearing a second ballistic vest given the heightened state of threat. Most people would prefer to have a patrol rifle; it gives them an advantage over the individual," said the FBI’s Kerry Sleeper, adding that a harness to carry all of the extra equipment, including medical supplies, was also useful. He said many police departments now have their officers keep "go bags" in their cars in case they have to respond to an active shooter incident.

Because such incidents often end so quickly, even before police arrive, the FBI report said that training exercises are essential for both law enforcement and citizens, and that training should include "not only an understanding of the threats faced but also the risks and options available in active shooter incidents."

Andre Simmons, a supervisor in the FBI’s behavioral unit, also warned that "the copycat phenomenon is real" and that shooters frequently have a "real or perceived deeply held personal grievance."

The study did not look at how the shooters generally obtained their weapons, but officials at the briefing said they were open to examining that down the road. This study, they said, was intended to provide basic data about what active shooter incidents have in common in order to better prepare law enforcement -- and anyone else who ever faces such a scenario.