A one-page internal 63-year-old memo about a UFO report involving three alleged flying saucers and alien bodies recovered in New Mexico is making the rounds again this week. And it all started with a story that the FBI itself released.

In its own memo, titled "UFOs or No?" the FBI has informed the public that one particular memo from 1950 is the most popular file in their Vault -- an electronic reading room made available to everyone since its creation in 2011.

With nearly a million views over the past two years, the memo tells of "an unconfirmed report that the FBI never even followed up on. The file in question is a memo dated March 22, 1950 ... authored by Guy Hottel, then head of our field office in Washington, D.C. Like all memos to FBI Headquarters at that time, it was addressed to Director J. Edgar Hoover and recorded and indexed in FBI records."

The memo told a third party story of an alleged Air Force investigator who reported that three flying saucers were recovered in New Mexico.

According to the original memo and reiterated by the FBI this week, the saucers "were described as being circular in shape with raised centers, approximately 50 feet in diameter. Each one was occupied by three bodies of human shape but only three feet tall, dressed in metallic cloth of a very fine texture. Each body was bandaged in a manner similar to the blackout suits used by speed fliers and test pilots."

If this memo had already been released as part of the Vault files two years ago, why did the FBI decide to focus attention on it again this week?

A number of media stories have surfaced, claiming the Hottel memo was first released or declassified two years ago when the FBI created the Vault. This is completely untrue. Let's get the facts straight.

First, the bureau explains that this document wasn't released in 2011 -- "It was first released publicly in the late 1970s and had been posted on the FBI website for several years prior to the launch of the Vault."

Second, the Hottel memo actually was obtained in 1977 by retired U.S. Navy optical physicist Bruce Maccabee, who got it as part of 1,600 documents released to him via the Freedom of Information Act. 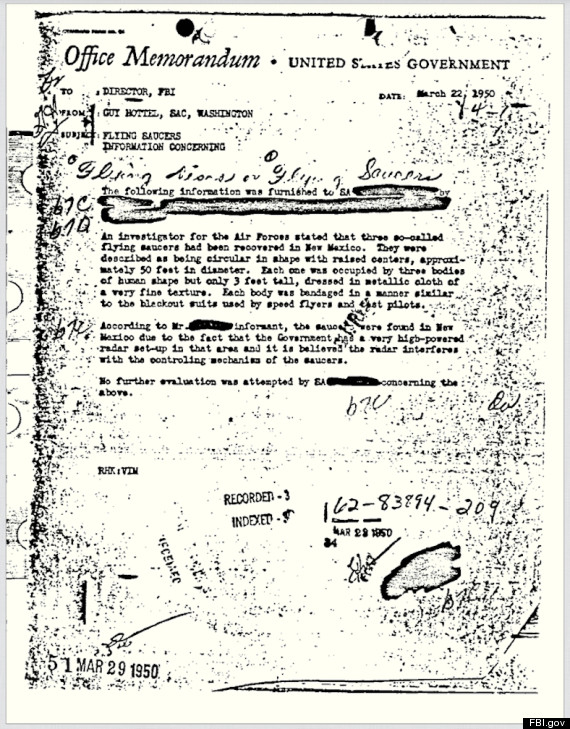 Also, the FBI notes that when the Vault was launched in 2011, "some media outlets noticed the Hottel memo and erroneously reported that the FBI had posted proof of a UFO crash at Roswell, New Mexico, and the recovery of wreckage and alien corpses. The resulting stories went viral, and traffic to the new Vault soared."

The bureau wants everyone to know that the memo in question was written three years after the alleged events at Roswell, with no connection between them at all.

Interestingly, right after the Vault was created and offered to the public, this reporter wrote a story about it in 2011, focusing on some evidence that had surfaced surrounding an oil scam artist who, two weeks before the Hottel memo was written, had spread stories about three crashed UFOs with aliens.

The FBI hints that some people had suggested the flying saucer-alien story was a hoax that had circulated in 1950. The bureau ends its tale saying, "Sorry, no smoking gun on UFOs. The mystery remains..."