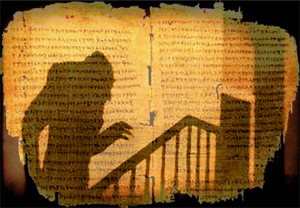 Over the last few decades, whenever the notion of a harmonious Christian beginning has been challenged by a look at the conflict between the apostle Paul and James (or Peter), the brother of Jesus, there seems to have been a readily available "how-to-manual" defense against this perspective. A quick dab of finger on tongue, a few whips of the pages, and there it: "How to Respond to Critical Studies." The response reads, blame it on F.C. Baur. Baur, the nineteenth century's most suspicious "German," who almost conjures up the image of Nosferatu: long dark shadows that come with nefarious descriptions such as "founder of the Tubingen School" or, God forbid, "a Hegelian." Real spooky stuff!

The "how-to manual" also offers a more detailed rationale for the defense, which goes as follows: The reason Baur exaggerated the conflict between Paul and James (Peter) was because he held to Hegel's historical idea of dialectic, two clashing forces (theses) to create a new (synthesized) perspective. In other words, Baur was simply bipolar, in the Hegelian sense of the word--of course. His bipolarization demanded he find conflict where there was none. Now we, as non-Tubingen Germans, and far more enlightened (wink wink), can sniff out his suspicious findings and overcome this troubled nineteenth-century thinker, right?

Well, actually, not at all. There are more cracks in this argument than there are in the original New Testament manuscripts themselves. It's hard to know where to begin breaking ground, especially with the glaring fact that all narratives, dramatic or historic, utilize a certain "triadic progression" that begins with a duality, including the Gospels and Acts of the Apostles. Does that mean Luke, Mark, and Matthew were Hegelian? Or, for that matter, any writer using a narrative with conflict is Hegelian? And why only point out Hegel? Why not Gianbattista Vico (an influence on Hegel) or Aristotle, or any other theorist attempting to show progression using history. If we called the use of Marxist materialist progression corrupt in nature, how many fields of modern New testament thought would be tainted? And finally, to move beyond this misguided scapegoat approach, it might be best to take a giant historical breath and begin again, by peering in on F.C. Baur behind his Nosferatu visage.

Ferdinand Christian Baur (June 21, 1792-Dec. 2, 1860) was a well-respected scholar in the New Testament field. He wrote in the nineteenth century, at a time when the winds of free thought were sweeping the hallowed halls of NT study. Beginning with Baur and then later Strauss and eventually Schweitzer, this was a nascent age when popes, kings, and professional clergy alone would no longer decide what was divine or non-divine research, or for that matter, science. And a time when, in the face of unleashed critical analysis, bedrock assumptions would at last loosen and some even come crashing down. Faith and knowing would begin to wrestle for preeminence in the New Testament world. Ah, but this was not necessarily a new phenomenon.

Not only were Baur's views anything but sinister, but also they had existed in the church well before the canon of Scripture was formed. Marcion, born in 110 CE, believed there were two Christianities: one born of the Hebrew Scriptures and one born of Paul and his Gentiles revelation, a new Gospel of freedom.

According to the Catholic Encyclopedia,
"The pure Pauline Gospel had become corrupted and Marcion, not obscurely, hinted that even the pillar Apostles, Peter, James, and John had betrayed their trust. He loves to speak of 'false apostles,' and lets his hearers infer who they were. Once the Old Testament has been completely got rid of, Marcion has no further desire for change. In his list of the 'appropriate' books for the canon, Marcion insisted on leaving out James and the other gospel writers with the exception of his own version of Luke."

Yet Marcion's understanding of the Paul vs. James/Peter divide is well known to the history of NT theology that followed him. Once we arrive in Luther's fifteenth century, the same incendiary issues arise with even greater heat. According to Luther's canon, "St. James' epistle is really an epistle of straw, compared to these others, for it has nothing of the nature of the Gospel about it.. We should throw the epistle of James out of this school [i.e., Wittenberg], for it doesn't amount to much. It contains not a syllable about Christ. I maintain that some Jew wrote it who probably heard about Christian people but never encountered any."

Finally, one does not need to grasp for either Luther or Baur when there are modern NT scholars who have affirmed and even expanded upon the early conflict between Paul and James in more explicit narratives. Highly regarded New Testament scholar James Dunn (University of Durham) points out, "When Paul was arrested and put on trial we hear nothing of any Jewish Christians standing by him, speaking in his defense--and this despite James' apparent high standing among orthodox Jews.... Where were the Jerusalem Christians? It looks very much as though they had washed their hands of Paul, left him to stew in his own juice. If so it implies a ¬fundamental antipathy on the part of the Jewish Christians to Paul himself and what he stood for."

In summary, all narratives, whether Hegelian or Biblical, work in a duality or dialectic context, for that is the very "engine" of story. In other words, the movement from duality to new synthesis is the mechanism that allows the story to progress; the same goes for history. The fact that F.C. Baur remains the Nosferatu of critical study is not proof that we have moved beyond the early conflicts over the "true gospel," but on the contrary, rather proof that we have yet to find an acceptable way to embrace our human foibles at work in the divine tale. Conflict is as old as the species and will always accompany even the greatest feats. In part, Baur's theory remains with us because it is not a theory, but a haunting first-century reality that still plays out in the Church today.