Earlier this week the Federal Communications Commission reached out to the Federal Aviation Administration asking them to allow passengers the right to use more electronic devices:

"I write to urge the FAA to enable greater use of tablets, e-readers, and other portable electronic devices during flight, consistent with public safety," FCC Chairman Julius Genachowski wrote in a Dec. 6 letter to Michael P. Huerta, the acting administrator of the Federal Aviation Administration (FAA).

The letter goes on to talk about how such devices are woven into our daily lives and should be allowed at all times while traveling.

Passengers and crewmembers alike have questioned the FAA's ban on transmitting devices for years, but because it's the "law of the land" passengers are supposed to obey the rule and the flight attendants are required to enforce it. But doing so can sometimes cause a lot of friction in the cabin. Does the name Alec Baldwin ring any bells?

In the year 2012, how many people actually board a plane not knowing that these devices need to be turned off? I say if you have a smart phone you should have the smarts to know what is and isn't allowed. But in the event you step foot on board and don't realize that your electronics need to be turned off, during the boarding process passengers are told about turning off (completely off) transmitting devices numerous times.

We flight attendants tell passengers at least twice via public address announcements; the safety demonstration once again reiterates the request. Aircraft manufacturers have even removed the "no smoking" sign (since it hasn't been allowed for years, and won't be coming back) and replaced it with a "Please Turn Off Electronic Devices" light. Yet, as I walk through the cabin doing my final safety checks prior to takeoff I catch about 10-15 people hiding their phones, flipping them over or hitting the "lock" button to darken the screen all in an attempt to pretend that they weren't using it. 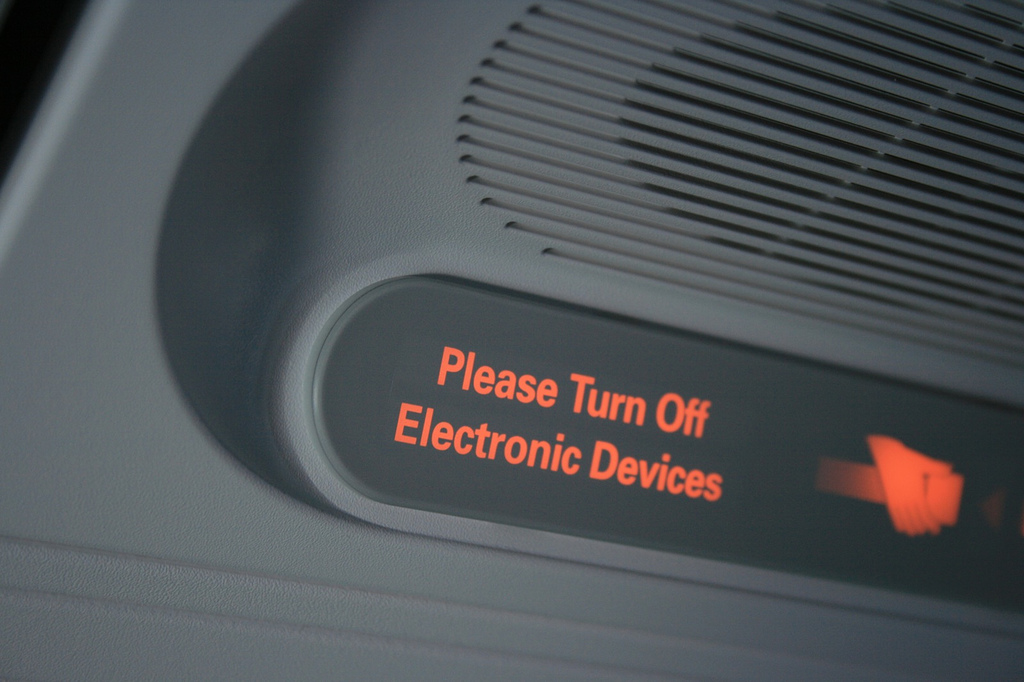 Trust me, we know you're using the phone. We know you're sending that last text, tweet or Facebook status update saying "trying to hide my phone from the flight attendants."

Here's how the FAA wants us to handle the situation: If we see it, we have to say something. If you're blatantly sending a text in front of me I have to "remind" you that the sign is on and the electronic device needs to be turned off (completely off) and put away until the use of such device is allowed and "ask for your compliance." But, I can't take it away from you and turn it off. I can't force you to turn it off. However, not obeying a crewmembers instruction is grounds for removal from an aircraft. But, I can't help but think of all of the phones and other devices that are on that we (as flight attendants) don't see and the plane takes off and lands just fine.

With that said, its obvious that a single phone being on (or even a few phones) won't make the flight unsafe, because if it did, no one would fly because planes would have experience frequency and electrical problems everyday. So, should the FAA allow the use of cellphones and other transmitting devices on board?

Since we have airlines providing power plugs, are we ready for the days of sitting next to someone who talks on their phone for a whole six-hour flight without the hope of their battery dying? What about someone using their iPad to Facetime for a few hours? Would you be okay being the passenger next to them while they scream over the vacuum in the background during their conversation?

Or, should the ban be lifted but airlines be allowed to restrict the use of phone conversations in their cabins to ensure everyone has a comfortable flight at their discretion? Can you imagine being a flight attendant at an airline that doesn't allow the use of cell phones when most might? Trying to tell someone to turn it off and the immediate response will be: "Well, XYZ Airlines lets me use it."

Will we soon see "cell phone sections" like we used to see "smoking sections?" For some reason the airlines thought that having a smoking section would stop the passengers who didn't want to inhale the smoke from having to do so though there were no walls... Maybe this will be the return of the phone booth?

And I must raise the question: Is in-flight Wi-Fi not enough? We have access to email, social networking, texting and more 15 minutes after the wheels leave the ground. These are all forms of communication that the passengers around you don't have to overhear.

Maybe the FAA should just allow the use of tablets/book readers and still restrict cell phone use. Is that the happy medium?

This could become the start of a new era in air travel for Americans. Your next flight may sound like an overcrowded coffee shop in the heart of Times Square with no escape until the flight lands, but hey, you won't have to hide your phone from the flight attendants anymore.

What will the "Please Turn Off Electronic Devices" light become next? "Quiet Please?"