This morning, Federal Communications Commission Chairman Julius Genachowski announced that he will finally seek a vote on President Obama's top tech issue, "Net Neutrality." There's just one problem: According to the New York Times, it's not even close to the real Net Neutrality that President Obama promised the American people. 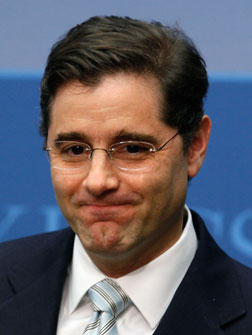 The Times report, based on interviews with the Chairman's office and a speech he gave today, indicates that the proposed rule is riddled with loopholes and falls far short of what's necessary to prevent phone and cable companies from turning the Internet into something that looks like cable TV, where they decide what moves fast, what moves slow, and whether they can price gouge you or not.

The proposal is a shiny jewel for companies like AT&T and Comcast that have met with the Chairman more than anyone else during the past month, and whose affection he seems to crave more than making good on President Obama's promise.

Now that the FCC's proposed rulemaking has been officially announced, it will be deliberated and modified for the next three weeks, leading to a final vote on Dec. 21.

According to the Times, the proposal:

Despite all this, there is still cause for optimism. Genachowski needs three votes to pass the proposed rules. The chances that either Republican commissioner will vote for the measure is near zero, leaving the chairman reliant on Democratic Commissioners Mignon Clyburn and Michael Copps. Both are stalwart public interest advocates who have repeatedly expressed their support for strong Net Neutrality rules.

Copps and Clyburn are the "deciders" for the next three weeks, and they have both demonstrated over and over that their top priority is the interests of the American people. If that holds true, there may be a happy ending to this story.