FCC.gov is swapping blue and gold for new and improved.

Tuesday morning, the Federal Communications Commission unveiled a revamped FCC.gov website, updating the site for the first time since 2001.

The 1996-era FCC homepage, a text-heavy blue, yellow, and white page littered with lists, jargon, and acronyms, has been traded for a tidier, teal-colored homepage that hides links behind tabs and mouse-overs and welcomes users with a interactive slideshow showcasing news and features.

A search bar and "take action" button--inviting users to "comment," "discuss," "help," or "complain"--is locked at the top of the page, and the right hand side of the page is dedicated to other ways users can engage with the FCC, from filing a public comment to following the agency's Flickr photostream. Additional features include the ability to embed livestreaming video from FCC announcements, an "FCC Encyclopedia" that defines terms like "slamming" and "narrowbanding," and an "Our Work" tab organized by subject area, rather than by bureau, as it was before.

In revamping the website, FCC managing director Steven VanRoekel says the commission learned from private sector standards and practices, such as focus groups, in its effort to present information in a more accessible way, better solicit user participation, and more effectively share data.

The new website is "not innovative in the private sector, but it is innovative in government," VanRoekel told the Huffington Post. "Looking at consumer sites, consumer experiences online, I saw that the expectations of people are growing at breakneck pace. When you go to a social media site, or an online shopping site, you expect to find a certain level. The government has never kept pace with that."

The FCC.gov redesign, which began in October 2010, cost $1.35 million. VanRoekel says the expense is justified as the new site, and a host of new technical features, will "pay for itself" in 12 months by automating certain tasks.

See FCC.gov's "before and after" below. The FCC is still A/B testing certain elements of the site and has invited users to submit their feedback on the redesign. Tell the agency what you think of the new look here.

FCC.gov Gets Its First Major Makeover In A Decade
Gallery 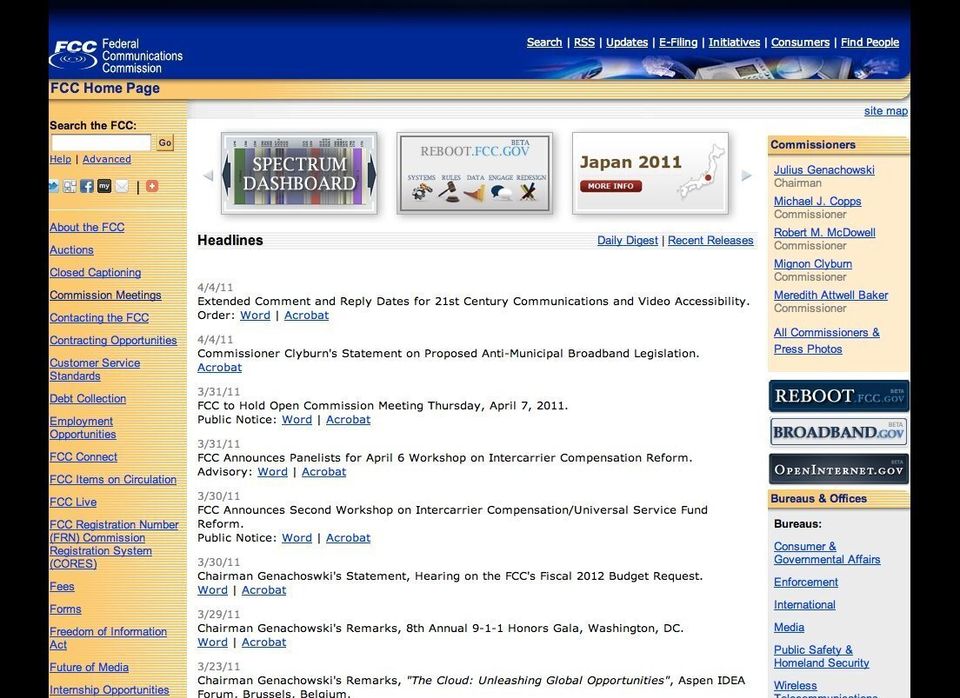