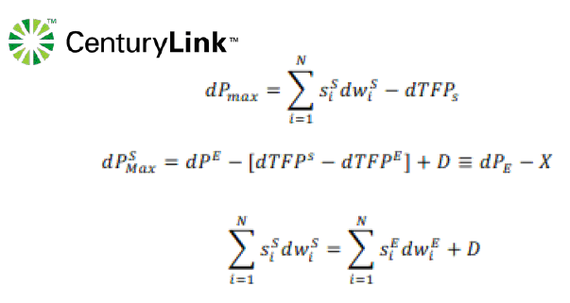 (Here are some cool looking equations submitted to the FCC by CenturyLink. It's a shame they are not useful.)

(Most of this article was originally published on Seeking Alpha.)

Over the last few years the FCC has been conducting a series of proceedings to fix "special access" services, now called "business data services" (BDS) and the agency is supposed to be making some announcements and changes over the next few months.

As we pointed out in previous articles, special access services are NOT special; they are just the state-based utility, regular phone lines (which can be copper or fiber) used for data services, like ATM machines or alarm services, or wholesale services to wireless carriers, such as Sprint. And, almost all cell services are a wired service with an invisible extension cord because all calls, etc. go to a cell site and then travel over a wire, a BDS service.

And there is an irony to all of this. The common wisdom is that no one is using the wires and everyone is wireless. Truth be told, the FCC's 2016 analysis found $45 billion in business data services revenues in 2013. But, most surprising, $25 billion of these revenues, the majority, are still mostly copper wires that could have been installed over the past 20-70 years.

Just three companies - Verizon, AT&T and CenturyLink - control most of the state-based telecommunications utilities in the US, such as Verizon New York or AT&T California, (with the exception of the state utilities or territories that were sold off to Frontier or FairPoint). And since no other large phone company came in to put in more copper, (and customers paid for upgrades to fiber optic wires), all of these wires are still mostly monopoly controlled, regardless of what the companies say about competition.

Currently, in order to move the process along, INCOMPAS, (the association of telecom competitors) has proposed a BDS deal with Verizon to lower the current rates about 15% with some other items thrown in.

The other large incumbents, AT&T and CenturyLink, don't agree. To paraphrase-- There is plenty of competition and there is no need to change the rates. Everything is fine. The graphic above are some calculations used to embrace this conclusion.

Unfortunately, neither the FCC or the INCOMPAS-Verizon deal, or the 'mathematical' formulas being applied will fix special access.

Billions in Cross-Subsidies and Financial Games Must be Dealt with--Now.

We found billions of dollars in cross-subsidies, annually, between and among the state local phone networks and Verizon's subsidiaries and various lines of business, including Verizon Wireless and special access.

And the special access excess, then, is coming from multiple issues, but at the end of the day, it impacts customers and the economy. Consumer Federation of America (CFA) found that the market concentration of the BDS market cost consumers & U.S. economy $150 billion since 2010. The cross-subsidies and lack of market priced payments by the incumbent's subsidiaries helped to create this economic harm.

None of the analyses by INCOMPAS or the FCC or CenturyLink examine the fundamental issue--that the 'models' discussed are not based on actual costs and they do not account for the massive cross-subsidies. The models don't account for the fact that a large portion of the special access expenses has been disproportionately charged to local phone customers, for example.

And unfortunately, we don't believe that the FCC can or will get this right. The FCC has no plans to do audits to stop the massive overcharging of customers or the economic harms built into the system.

From an Investor Perspective

If business data services are really the underlying newly-renamed wired infrastructure, then all companies and services that interconnect or rely on these local networks will be impacted by the FCC's decision. This includes the end user services such as the alarm and security systems or the banking networks or healthcare networks. If wireless is really a wired service with an invisible cord, then all wireless and broadband services offered by AT&T, Verizon or the competitors like Sprint or T-Mobile will be impacted if the FCC doesn't get this right.

From a Municipality and Customer Perspective

But it is more than that. Since BDS is really the state utility wired infrastructure, it is also a matter of which areas (or municipalities) will even be maintained, which areas will get shut off, or which areas will get faster broadband or have competition. And it is even about the costs of using the wireless phone for watching videos or the price competitors, like Sprint, have to pay to offer services. Also, companies that are selling video like Netflix or social media services must also be concerned as their offerings are constrained by what their customers can get and the price they pay for it, especially if there are data caps imposed by the provider.

Let me be very specific. In 2010-2011, Verizon changed management and made Lowell McAdam, former CEO of Verizon Wireless, the new CEO of Verizon Communications, the holding company. And in 2010, Verizon decided to cross-subsidize the building of the fiber wires to the cell towers and diverted massive amounts of the capex that was supposed to be used for maintaining and upgrading the wired networks for business and residential services.

Verizon's CFO Fran Shammo stated in a 2012 investor meeting that the wireline networks were funding the wireless deployments.

"The fact of the matter is Wireline capital - and I won't get (did he say get or did he say give?) the number but it's pretty substantial - is being spent on the Wireline side of the house to support the Wireless growth. So the IP backbone, the data transmission, fiber to the cell, that is all on the Wireline books but it's all being built for the Wireless Company."

And even the Verizon press releases makes it clear that the wireless build out is part of the wireline construction expenditures. Verizon NY's press release pertaining to the capex states:

This release clearly establishes that for the year 2010 Verizon spent $1.4 billion on wireline ("landline") construction in New York State, and part of the focus was FiOS TV. But there were also 2,800 cell sites being put up as part of the wireline network.

"Deployment of fiber-optic links to wireless providers' cell sites throughout New York as these carriers expand their infrastructure to meet ever-growing demand for wireless broadband and advanced 4G services. In 2010, Verizon deployed fiber optics to connect more than 2,800 of these sites."

Going through multiple sources, we uncovered that over a three-year period, Verizon New York built or upgraded 5,515 sites (taken directly from Verizon as the source). We estimate that $2.8 billion was charged to Verizon NY for this construction, which is a whopping 81% of the entire utility capex, it would appear. And similar, if not identical, actions occurred in every Verizon territory.

In a mathematical model, while the costs of special access may be forward-looking, there is has no way of knowing whether the line of business has paid the money or it has been cross-subsidized by, in this case, the local utility networks.

Underpaying on Special Access and Overcharging Competitors, including Sprint.

The financial statements also detailed that Sprint, for the exact same timeframe, and what appears to be the same class of expenses, was charged $119 million in 2009 and $104 million in 2010. Caveats abound, but considering that the data was taken from Verizon's own SEC-state-based consolidated statements - why is there such a large difference in payments to Verizon NY, would be a good question to ask. (Note: Verizon stopped publishing the financial information about Sprint in 2010.)

At the time, Sprint had about half the number of subscribers nationwide, and we would assume Verizon had a much larger number of subs in their own territories.

Running the numbers in multiple states, we found that Sprint was probably paying 275%+ or more than Verizon Wireless for access fees.

Nationwide Overcharging: In 2015, assuming that AT&T and CenturyLink are giving their own wireless affiliates financial perks, Sprint could be overcharged close to $1 billion annually. And the other unaffiliated competitors that rely on the incumbent wired networks are in the same situation as Sprint.

Mathematical Models Fail to Capture Underpayments and Overcharging of the Companies.

Simply put: The underpayment of access fees to the wireline networks or the overcharging of competitors - none of this would show up in a mathematical model as it is not based on a single rate paid for a service.

This is an excerpt from the 2015 Verizon New York annual report filed with the NY State Public Service Commission. Neither the FCC or any consultant or expert has bothered to examine the actual financial books, but instead they rely on mathematical mumbo jumbo.

According to Verizon NY's 2015 annual report, local service brought in $1.3 billion and had an EBITDA of -132%. This is in contrast to access fees, which were $2.5 billion in revenue and had and EBITDA of 66%. (Special access was $2 billion and represents 80%+ of the total.)

The 'Local Service' revenues are mostly from the copper-based "POTS", "Plain Old Telephone Service", lines. Verizon has stated it is no longer upgrading and maintaining these lines, the retail copper lines.

How can local service be paying the majority of network expenses? And how can access services have a 66% EBITDA for mostly copper-based services while the same exact wires have massive losses?

In September 2015, the CWA filed letters in multiple states to investigate Verizon's claims that it spent just $200 million in the last 7 years on the copper networks.

"The Communications Workers of America (CWA) today announced it is filing letters with telephone regulators in six states and Washington, DC calling on them to open investigations into the deterioration of Verizon's copper landline networks. In July, Verizon admitted in a letter to the FCC that it had only spent $200 million over the last seven years to maintain its copper landline network in eleven states and the District of Columbia."

While Verizon claims that their statement was taken out of context, it is clear that the network expenses paid by 'local service' have little, if anything to do with offering 'local service', and most of the $1.47 billion in network costs must be funding other Verizon lines of business.

The INCOMPAS-Verizon agreement doesn't examine the actual costs, thus it has set the bar so low that none of the competitors, much less customers, will ever feel the 15% bump. Most importantly, it does not fix the cross-subsidies of the wireline-wireless affiliates or the cross-subsidies of special access and local service.

Any investor in any company that is going to be impacted if this deal goes through might want to read this post again...slowly... and ask the FCC (and companies) to examine the cross-subsidies and why they are using hypothetical mathematical models vs. examining actual financial reports and calling for audits.

We will be doing a series of new articles about special access services. BDS is the new telecom battleground; the companies that control access services control America's wireline and wireless communications marketplace.