Over the weekend, culture learned that the FDA had cited several U.S. cheesemakers for aging cheeses on wooden boards. This post is our first on this topic, but we'll be following this story as it develops.

The FDA announced last week that it is imposing a new ban on using wooden boards in the cheese aging process, citing that the material is too hard to properly sanitize and puts consumers at risk of foodborne illness. A spokeswoman for the agency, in quoting the Current Good Manufacturing Practice (cGMP) rules, stated:

"The use of wooden shelves, rough or otherwise, for cheese ripening does not conform to cGMP requirements, which require that "all plant equipment and utensils shall be so designed and of such material and workmanship as to be adequately cleanable, and shall be properly maintained." 21 CFR 110.40(a). Wooden shelves or boards cannot be adequately cleaned and sanitized. The porous structure of wood enables it to absorb and retain bacteria, therefore bacteria generally colonize not only the surface but also the inside layers of wood. The shelves or boards used for aging make direct contact with finished products; hence they could be a potential source of pathogenic microorganisms in the finished products." 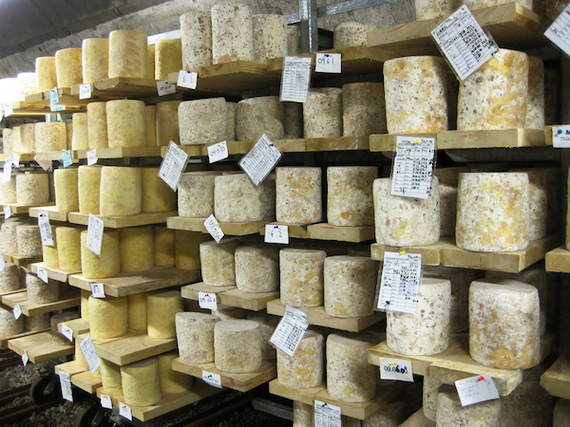 To summarize: Wood holds bacteria, fungi, and other microorganisms, some of which may be harmful. Wood boards are indeed cleaned after the aging process, but sanitation methods are usually just a quick power wash and a lengthy dry in the sun, allowing for ultraviolet rays to kill off any surface germs. Slate.com reports that the primary worry is about the bacteria listeria, which is harmful to human health, and this crackdown is aimed at mitigating a recent rise in outbreak cases.

However, cheesemakers, mongers, and consumers are fighting back on many fronts, calling the listeria concern blanket lawmaking. In an article from Inc., Aaron Foster from Murray's Cheese in New York stated that "'cheesemakers have used rigorous environmental testing to show that [wood is] really very safe ...  It's certainly less expensive than stainless steel or plastic,' which are so sterile they can actually draw pathogens." Not to mention, so many cheeses rely on wood to give them their distinct flavors. Taleggio, Beaufort, and Parmigiano-Reggiano all use wood as an integral part of their processes, using the porous material to draw out moisture. Because of this, opponents of the ban like Jeanne Carpenter argue this new regulation will put American cheeses at a worldwide disadvantage, killing their value and respectability on the international marketplace. Then there is the fact that FDA regulations also apply to imports; therefore, wood-aged cheeses would not be permitted to enter the country, crippling the foreign cheese market as well.

Critics' final case comes from the argument that the new imposition is, in fact, unprecedented and illegal. According to Carpenter's article, cheese regulation was previously left to the states themselves; the federal government has only involved itself since the passing of the Food Safety Modernization Act in 2011, which allows the administration to step in to prevent contamination rather than simply responding to it. Additionally, Forbes highlights that until recently, the FDA acknowledged the use of wood boards in the aging process, but did nothing about it. Therefore, according to the article, this is not enforcement of an old rule, but the sudden drafting of a new one without the due notice and comment process from producers. If this is in fact the case, then the FDA would be in violation of federal law.

Here at culture, we're interested to see what will come of this. Please stay tuned for more updates!