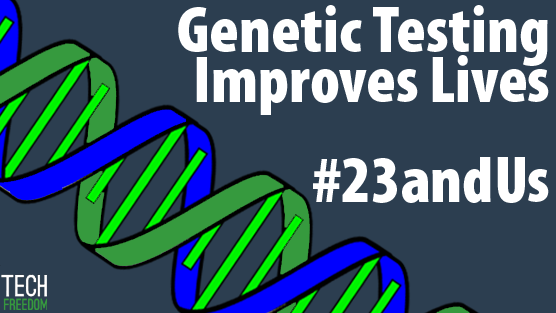 Since 23andMe launched in 2007, over 500,000 Americans have had their saliva tested to learn more about their ancestry, health risks and genetic predisposition to a wide variety of factors. The price has plummeted ten-fold: just $99 for the home-test kit. The scrappy company was poised to take its product mass-market with marketing campaigns aimed at user numbers into the millions.

Perhaps that's why the Food and Drug Administration finally cracked down on the site. Today, the FDA shut down further sales of the saliva home-test kit, citing the "potential health consequences that could result from false positive or false negative assessments for high-risk indications... For instance, if the BRCA-related risk assessment for breast or ovarian cancer reports a false positive, it could lead a patient to undergo prophylactic surgery, chemoprevention, intensive screening, or other morbidity-inducing actions, while a false negative could result in a failure to recognize an actual risk that may exist." In other words, the FDA think that Americans can't be trusted with more information about their potential health risks because some people might make rash decisions with it. But banning personal genomics isn't the answer.

23andMe is simply doing what the Internet does best: forcing old dogs to learn new tricks. That's what the fight between Uber and taxicab commissions is about. Same for AirBnB and hotel regulators. The only profession slower to change how they do things than doctors is bureaucrats. So the FDA's reaction is understandable -- but misguided.

Those of us who have already used the site know the real problem is that doctors themselves are behind the curve. When 23andMe sent us our results, we followed their advice: we asked our doctor to talk about them. Most doctors didn't know where to begin. But the more of us ask about 23andMe, the more the medical profession is catching up. Slowly but surely, they're brushing up on genomics, taking the time to understand the site, and talking to us about our results and what, if anything, to do about them.

By prompting such dialogue, 23andMe has sparked a revolution in how the medical profession uses genetic information. Change like that rarely, if ever, comes from within an industry; it's almost always driven by people on the outside with new approaches and technologies that disrupt old paradigms -- like the idea that genomics aren't something "ordinary" doctors need to understand or that patients shouldn't be active, informed participants in their healthcare.

We're urging the FDA not to short-circuit this revolution, and have launched a Change.org petition to rally those who agree. Our message is simple: "Please trust us -- and our doctors -- to make responsible use of our own genetic information. Instead of banning new technologies, the FDA should focus on educating doctors and patients about the benefits, and limitations, of genetic testing."

If it takes the FDA as long to sign off on innovative services like 23andMe as it does for prescription drugs (around 8 years), the medical profession will continue dragging its feet, as if genomics and the Internet were only distant tools that might some day be incorporated into medicine. But they're here now, and they'll continue changing medicine for the better. Doctors and patients will both adapt to the new reality of medical care personalized for our genes -- but only if the FDA gets out of the way.