The federal agency charged with resolving failed banks and selling their assets is hiding key details about the transactions.

The identities of losing bidders and the prices they've offered for failed bank assets are some of the details currently not being fully disclosed. For decades, this information was publicly available. But this year the Federal Deposit Insurance Corporation abruptly decided to limit the flow of information.

It couldn't have come at a worse time. In addition to the bailout of financial companies like Citigroup, AIG and Bank of America, the federal government is on the hook for another $80 billion through a little-reported FDIC program designed to encourage private investors to buy failed banks and their assets.

When banks fail, the FDIC effectively takes them over, with an eye towards returning them to the private sector as soon as possible. In the past, the FDIC typically solicited bids from other banks. Now, private equity groups have been added to the list of eligible investors. Regardless of what type of investor is ultimately chosen to take over a failed bank, the FDIC is required by law to choose the "least costly" bid.

As first reported by American Banker, it's documents from those very deals that the FDIC has largely not released, despite numerous official requests via the Freedom of Information Act, the law that ensures public access to U.S. government records. While the winning bids are disclosed, most of the losing bids are not.

"We don't know whether the government got us the best deal," said Kenneth Thomas, an independent bank consultant and finance lecturer at the University of Pennsylvania. "We're not talking millions -- we're talking billions of dollars."

For example, one of the bids for BankUnited, a failed Florida-based lender that had about $13 billion in assets at the time it was sold, failed to secure victory despite the fact the potential buyer offered the most money for the bank's assets.

Not disclosing the documents appears to run counter to a pledge made by President Barack Obama on his first full day in office.

"The Freedom of Information Act is perhaps the most powerful instrument we have for making our government honest and transparent, and of holding it accountable," he said Jan. 21. "And I expect members of my administration not simply to live up to the letter but also the spirit of this law."

As first reported by The Wall Street Journal this week, the FDIC has assumed most of the risk on about $80 billion worth of loans and other assets from failed banks. Known as "loss shares," the deals encourage investors to buy failed bank assets by typically guaranteeing at least 80 percent of potential future losses.

In most cases, the FDIC agrees to cover 80% of future losses on a big portion of the assets, and 95% on the rest. The FDIC says it doesn't anticipate facing the 95% loss-coverage scenario on any deal...

The agency expects it will eventually have to cover $14 billion in future losses on deals cut so far. The initiative amounts to a subsidy for dozens of hand-picked banks.

Since the start of 2008, the FDIC has cut 53 such deals, said David Barr, an agency spokesman.

Unlike most federal agencies, the FDIC does not receive appropriations from Congress. Rather, it relies on fees from the banks it oversees. The deposit insurance fund, which protects most bank deposits, now stands at about $10.4 billion; this time last year it was at $45 billion. It's supposed to insure about $4.8 trillion in deposits.

If that fund runs dry, the FDIC has a temporary $500 billion credit line to the U.S. Treasury through the end of next year. It was recently permanently increased from $30 billion to $100 billion.

Thomas argues that's part of the problem. Without knowing what the failed bids were offering, he said, it's impossible to know how much money the taxpayer may ultimately lose.

"The fund will go negative -- there's no doubt about it," he said.

The FDIC has not technically denied FOIA requests for the losing bid documents. Rather, the agency has simply delayed sending its decisions.

But a review of agency records shows that the FDIC has increasingly denied the public access under the Freedom of Information Act.

Through this week, the rate of denied FOIA requests has doubled from last year. In fact, FOIA requests are being denied at a higher rate than at any point during the notoriously-secretive George W. Bush administration. 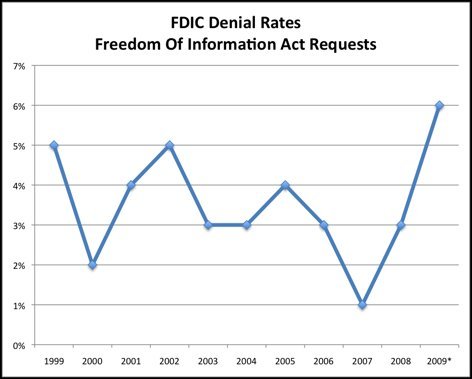 The rate is based on requests made since January. The agency is required to report its FOIA-related statistics on a fiscal year basis (Oct. 1 to Sept. 30). But if the trend over the last eight months holds up, the denial rate will set at least a 10-year high.

Some observers also questioned whether the FDIC can legally withhold such records and accused the agency of flouting the Freedom of Information Act, which details what can be kept confidential and requires public disclosure in all other cases.

The agency has posted a short note on its Web site explaining the delay.

"The FDIC is currently undertaking a review of its disclosure policy concerning failed institution bids to ensure that the bidding process encourages an open flow of information and attracts the maximum participation by interested parties," it notes. "The FDIC has delayed processing of FOIA requests for bid information pending completion of that review."

But Thomas speculates the reason behind the FDIC's delay is due to concerns expressed by private equity investors.

"It's only because private equity is at the table," he said.

Private equity investors were involved in purchasing IndyMac and BankUnited, two of the biggest banks to fail since the financial crisis began.

Thomas added that he's been "led to believe" that private equity groups have bid on at least one of the two biggest failed banks of the year, Texas-based Guaranty Bank and Alabama-based Colonial Bank. Both failed in August. Combined the two banks had assets of about $38 billion at the time of their respective failures, according to the most recent figures available.

Last week the agency adopted final guidelines governing private equity group purchases of banks. Some of the elements were watered down from the proposed rules.

The changes are less stringent than initially proposed, and FDIC Chairman Sheila C. Bair told BusinessWeek they are justified. The agency, she noted, has received several dubious bids for failed banks. One private equity firm proposed to flip the bank to another investor quickly. Another wanted an offshore company to own the bank, making it less transparent. Private equity firms "have greater risks to us than established banks," Bair said. "We want them in, but we want to set some ground rules that will address the heightened risk."

"There hasn't been a lot of activity from private equity firms," agency spokesman Barr said. "Those that are making the noise about bids are not bidding on failed banks."

The FDIC expects to announce its final decision regarding failed bids by the end of the month.