The Santa Barbara News-Press published a photograph on Jan. 3 of some Latino people at the DMV with the accompanying headline, "Illegals Line Up For Driver's Licenses." Things moved quickly after that.

On Jan. 4, Filiberto Nolasco Gomez, founder of Chipsterlife.com, tweeted a photo of the now nefarious "Illegals" headline and Change.org launched a petition demanding that the paper retract and apologize for its "racist and hateful headline" that currently has more than 6,000 signatures.

"Santa Bruta, that's what the homies call it. It means brutal. There's a brutality about this place," PODER (People Organized for the Defense & Equal Rights of Santa Barbara Youth) member Gonzalo Rios Castro said. The young filmmaker and Santa Barbara Eastside native refers to the flagrant race baiting, or possibly just a great marketing strategy, perpetrated by the ever-shrinking News-Press. "[Publisher Wendy McCaw] is dehumanizing people with the use of the 'I' word, so we're going after her advertisers with the boycott." The News-Press presses on despite AP dropping the term "illegal" from its stylebook in 2013 acknowledging its racist and dehumanizing connotations.

A few days later someone vandalized the News-Press building on Jan. 7 with the spay-painted message: "The border is illegal not the people who cross it."

PODER organized a protest on Jan. 8 at the News-Press office in De La Guerra Plaza, where they took the streets and demanded a retraction within 10 days or face a boycott. 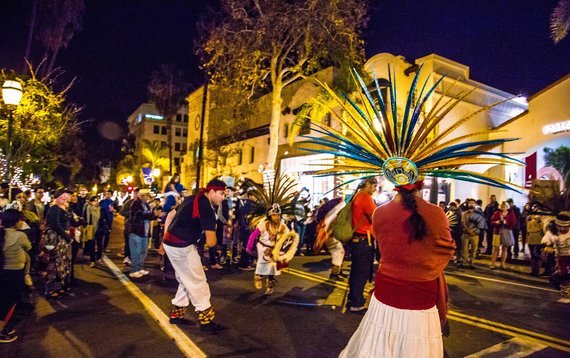 The newspaper then aligned itself with the Minuteman Project, which posted a rant in support of McCaw's publication on their website peppered with incendiary language, invoking goose-stepping, fascism, freedom and something called "the far left." The News-Press co-publisher Arthur von Wiesenberger fanned the flames with another response on the Minuteman Project's site, citing Che Guevara and using provocative language: "We will not give in to the thugs who are attempting to use political correctness as a tool of censorship and a weapon to shut down this newspaper."

Mainstream media outlets including Cosmopolitan.com and the LA Times picked up the story. So when PODER posted the News-Press advertisers on its Facebook page and announced a boycott, McCaw followed up with a second "Illegals" headline on Jan. 16.

PODER led a second protest on Martin Luther King Day which brought a group calling itself We The People, an "anti-immigrant" group most recently seen in Murrieta, to De La Guerra Plaza, certifying Santa Barbara as the new flashpoint in the immigration debate.

Riding the wave, the News-Press took it a step further demanding that Santa Barbara City Council member and PODER supporter, Cathy Murrilo, disclose all her Internet searches performed on public computers. The implied threat seemed clear; if you side with PODER and the resistance, we're coming for you.

"The News-Press, which began in 1855, has experienced diminished goodwill in the community since 2006, when reporters and editors began departing en masse, citing editorial meddling from billionaire owner and publisher Wendy McCaw," LA Times reported.

Former News-Press senior writer Melinda Burns provided some context: "Wendy McCaw is a pariah in her own hometown. Many thousands of readers quit the News-Press years ago, after she fired eight of us reporters in the wake of a union vote. The boycott is pervasive and ongoing. It's hard to imagine who could still be taking the paper today, in light of McCaw's utter disregard for workers' and immigrants' rights." Burns, a 21-year veteran of the paper in 2006, was part of a staff exodus after confronting McCaw's lack of journalistic ethics.

Though the paper appears to be marginalizing itself into obscurity, the News-Press reduced it's size in June making it a two-section paper. Taking that and the current boycott into account, the paper could soon be published on a matchbook cover.

On the other hand, Gomez from chipsterlife.com says, though unconfirmed, the he's heard the News-Press has received a lot of new subscribers from out of state, which is conceivable. I've mentioned the News-Press 14 times in this post alone. The amount of buzz around the News-Press could align them with like-minded individuals across the nation.

Regardless, the gloves are off and the game is on -- the sexagenarian billionaire McCaw in one corner and PODER in the other. McCaw could publish her paper out of pocket well into the later rounds, but PODER is a formidable opponent; they recently defeated a proposed gang injunction in Santa Barbra, the first ever victory in the U.S. I'm betting on the local grassroots community organizers with their finger on the pulse of a rapidly evolving world in the information age.