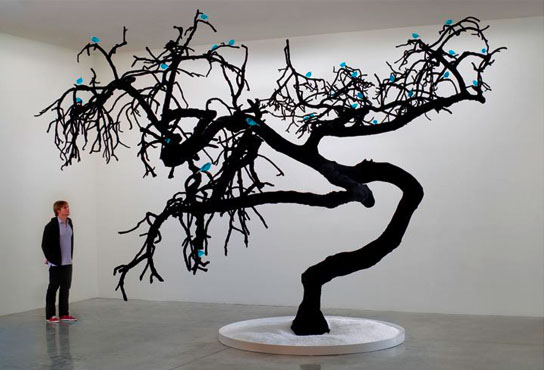 There is a passage in Victor Hugo's Les Miserables that makes me think of Rebecca Campbell's installations and paintings -- both are at once familiar and menacing. Hugo speaks of the ways in which physical places from our pasts become holders and place cards for psychological memories and experiences. "But when we are distant from them we find that those things have become dear to us, a street, trees and roofs, blank walls, doors and windows; we have entered those houses without knowing it, we have left something of our heart in the very stonework. Those places we no longer see, perhaps will never see again but still remember, have acquired an aching charm; they return to us with the melancholy of ghosts..."

In Rebecca Campbell's works, there is something of Hugo's concept of "aching charm" that does indeed return to us with "the melancholy of ghosts." In her recent Los Angeles show "Poltergeist," Campbell recreated her parents' front entry way with eerie precision. Walking in through this recreated threshold, visitors were faced with a blackened tree with aqua blue birds scattered throughout. Campbell walks the line of stark contrasts -- suggested death and life, darks and lights, fears and faith. Her latest show opens this Thursday, October 29 at the Ameringer | McEnery | Yohe gallery in New York and runs through December 5th. 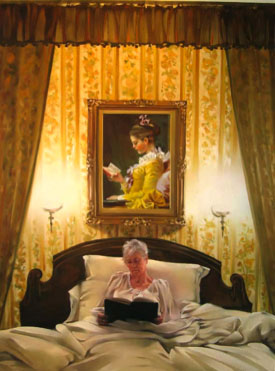 Kimberly Brooks: Your paintings seem to recreate idealized version of memories. How do you come up with your subject matter? 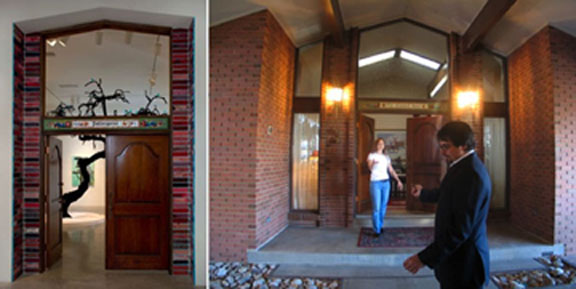 Rebecca Campbell: Because I'm interested in exploring aspects of childhood, memory, nostalgia and time I often use the house I grew up in and things in and around that house as inspiration. For my last exhibition "Poltergeist" people entered the show through my parent's actual front doors. The doors were surrounded by my interpretation of the rest of their entry way. The doors were framed by 300 red "bricks" made of individual pallet knife oil paintings on panel. Other revisited objects include the kitchen table, bedroom wallpaper, shag carpet, the forest, our piano, an avocado green wall oven and the stairwell. My personal nostalgia gets charged with broader reflections on pop culture, art history, myth and religion.

KB: Tell us about what inspired you to make certain pieces in your recent shows. RC: Right now I'm curious about the fact that when a person is having a really strong experience of nostalgia, time seems to collapse and the past, the present and everything in between become one. For example a nostalgic moment for me might be triggered by a memory of walking through the forest when I was five but that memory then triggers a hundred others from dancing to Boys Don't Cry while drinking black label beer in the park when I was a teenager to cutting lavender for the dinner table yesterday afternoon. Time becomes a circle and it's both sad and sweet at the same time. 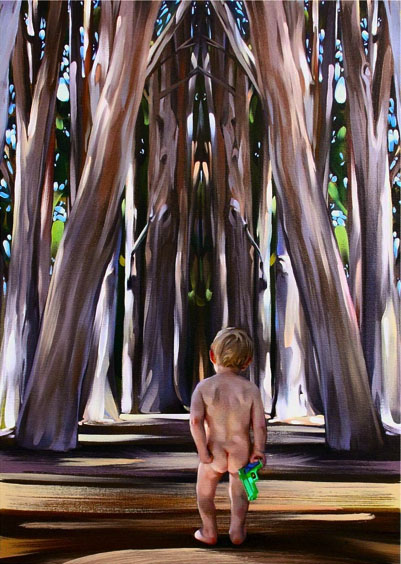 A good example of how I incorporate this into my work is Daddy Daughter Date. The original idea for the painting is based on my relationship with my father as a teenager. Going on a "Daddy Daughter Date" was a tradition in our church. When you were 14 you got dressed up and went to a special dinner with your dad where you learned how to be a lady, waiting for doors to be opened, using silverware properly, and provoking thoughtful conversation. The reality of my 14 year old self was very different. I was sneaking out to underground clubs and flirting with every dangerous thing I could find. The kicker is that now I am a parent. So I restaged this drama between a father and a daughter in my current house and let the painting evolve from its inspiration point into an amalgam of experiences and time periods. 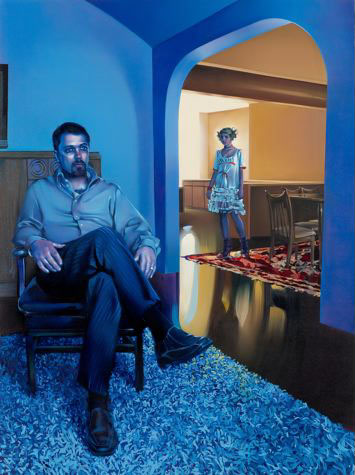 Rebecca Campbell, Daddy Daughter Date, 2008, oil on canvas, 90" x 67", image courtesy of LA Louver Gallery KB: Do you have any routines or process that might be unique, curious? I'm interested in the combining realism and abstraction to create an experience that interests both the brain and the body. My art always has an aspect of story telling in it that appeals to the part of us that responds to language and symbols but it also always has an abstract aspect created by using huge brush marks or strange materials that affect people in a visceral way. I'm as happy to be using a turkey baster and a broom as I am to be using a three haired liner brush. 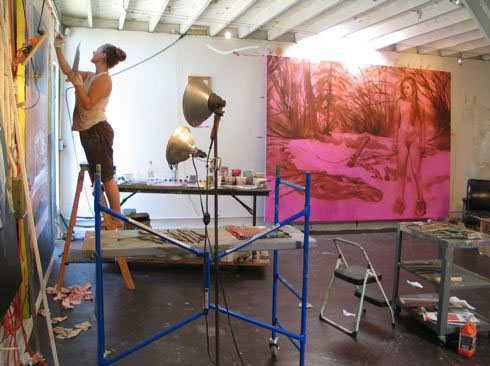 RC: The centerpiece of "Poltergeist" was a 13 foot tall tree that has been encased first in Fiberglas and second in a finely tailored couture dress of black velvet. A flock of 30 hand blown glass bluebirds perch on bronze feet across the crown. The birds get their brilliant blue color from the Windex they've been filled with. The whole composition rises from a 7 foot wide dish filled with salt from the Great Salt Lake that shines like snow. The inspiration for this piece came while I was driving to Utah to visit family and passed a large stand of burned trees in deep snow drifts outside Cove Fort. The cadaverous white field against the dense charcoal silhouettes reminded me of Sargent's Madame X, at once ravishing and ruined.

KB: What else about painting moves you. What is it all about for you?

RC: It's about tracking ghosts. It's about selling diamonds to poets. It's about that slippery little idea of a connection that is deeper than butter and as long as water. It's about the blasphemy of nihilism against the righteousness of being wrong and faithful.

I can put it in terms of Barthes. The slice between holds the power. Truth, Love, and Forever are all impossible right? But if you hem them together they become mythic. Something tied neither to the definition of its parts of the sum of its syllables. It becomes true the way that although narcissus is made of paper, his addiction to himself reveals itself every morning in a billion medicine cabinets. If you invite love into reality it will undoubtedly show up and immediately be misunderstood and infected with the malignancy of being human. It will be abstracted and misapplied. That does not make it untrue. That makes it tragic and worthwhile above all else. 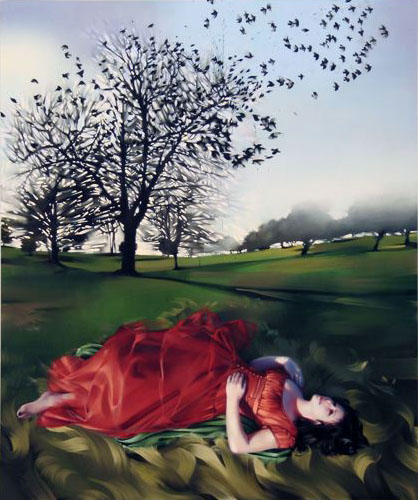 Rebecca Campbell (b. 1970) was born and raised in Salt Lake City, the youngest of seven children in a strict Mormon family. By age twelve, Campbell had begun to develop a critical eye, questioning the parameters of the church and the role it ascribed to her gender. This led to her departure from the church. Campbell did not bow to pressure to conform to the societal norms, but instead spent her teenage years developing her passion to make her art, which included sculpture and installation, as well as painting and drawing. Campbell left Utah to study at Pacific Northwest College of Art, Portland, Oregon, receiving her B.F.A. in 1994. While continuing to make art, she worked as an independent exhibition curator in Salt Lake City 1994 through 1998. In 1998, Campbell received a residency at the Vermont Studio Center, and in 1999, moved to Los Angeles where she earned her MFA from UCLA in 2001. Campbell's paintings have been exhibited in Los Angeles, New York and Basel, Switzerland and featured in publications including Art News, the Los Angeles Times, Art Papers, X-TRA, Art Ltd., and Artworks Magazine. Campbell is represented by LA Louver Gallery in Venice, CA and Ameringer-Yohe Fine Art in NYC, NY. Recent exhibitions include Superficiality and Superexcrescence: Surface and Identity in Recent California Art at the Ben Maltz Gallery in Los Angeles, CA in June of 2009 and a solo exhibition opening in October 2009 at Ameringer-Yohe Fine Art. You can visit Campbell's website at www.rebeccacampbell.net .

First Person Artist is a weekly column by artist Kimberly Brooks in which she provides commentary on the creative process, technology and showcases artists' work from around the world.