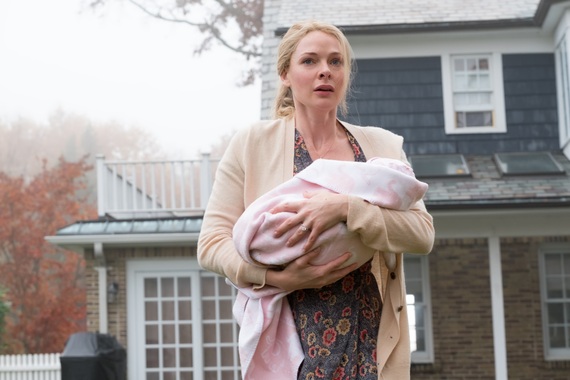 Rebecca Ferguson plays Anna, who had much more fun being the "other woman."
Photo credit: Barry Wetcher, DreamWorks

How can a gripping page-turner be such a mediocre movie?

The Girl on the Train, directed by Tate Taylor and based on the blockbuster novel by Paula Hawkins, is upscale, sexy and stylish, featuring many good looking people behaving badly. The movie is so confusing to follow, it makes keeping track of the names in Russian literature seem easy. What is perfectly clear is that everyone is miserable.

Screenwriter Erin Cressida Wilson plucks the mousy brown protagonist, Rachel (played by Emily Blunt), from the British rail in the book to the tracks of the Metro-North Railroad in New York. Rachel is a sad sack, par excellence. The movie opens with her sitting backwards on a train, foggily sketching in a notebook. Rachel is usually snookered because she likes to sip alcoholic beverage in a plastic commuter cup. Haunted by loss, despair and self-loathing, she watches the world go by during her commute to nowhere. (She's been fired from her job and pretends to go to work so that her roommate won't worry about her being able to pay rent.) In the haze of houses and manicured landscapes, Rachel notices a man and a woman at one of the homes and longs for their glamorous life. The sexy pair, Scott and Megan Hipwell (played by Luke Evans and Haley Bennett) flaunts their lust and affection in full view of voyeuristic train passengers, especially the vulnerable Rachel. These two adults don't seem to mind being in full view of trains going by every 20 minutes.They get it on in the upstairs bedroom. They snuggle in front of a fire pit in the backyard. They cuddle over glasses of wine on their porch. Rachel is drawn into their wonderful world, but doesn't realize that the seemingly adored Megan is going through her own personal hell. She's just going through the motions of a perfect relationship.

Coincidentally, the Hipwells share the same upscale neighborhood with Rachel's ex-husband Tom, his wife Anna, and their baby. (Anna is Tom's ex-mistress with whom he cheated on while married to Rachel. She is played by the lovely Rebecca Ferguson.) Justin Theroux plays Tom with a sleazy, oily creepiness, not exhibited by book's character. One of the most unrealistic scenes occurs when he hires the gorgeous blonde (and promiscuous) Megan, to help out in his home. (This is easier to believe in the book, since we do not see Megan.) Anna does not have a job, but for some reason needs someone to assist with baby Evie. (Viewers will have a tough time keeping these characters straight.) When Megan suddenly quits for another job, Anna gets upset, not realizing this is probably a good thing. Most women want a nanny who looks like Nanny McFee, not Scarlett Johansson. Anna gripes that she won't be able to go to the farmer's market, a first world problem if there ever was one. How can she watch a baby while she shops for organic produce and grass fed beef? After a tiff with Megan, she apologizes to get her back, to no avail. Anna feels sorry for herself and the self-loathing stars to percolate. In bed that night, she is depressed and turns away from Tom. It was much more fun being the other woman.

The next day, Rachel's commuter fantasy is shattered when she spots Megan with another man. Megan kisses him in full view of an oncoming train comprised of local Hastings-On-Hudson passengers. The fact that her husband could be one of them is not a concern, apparently. Rachel feels betrayed, just like she did when Tom left her for Anna. She is raging and she's not going to take it anymore. How could this happen to the perfect couple? So when Megan goes missing the next day, Rachel takes it upon herself to get involved. She feels empowered. Her train wreck of a life has purpose. She sets off a series of investigations, accusations, mistaken identities and misunderstandings under the guise of being helpful. No one believes her because she is inebriated most of the time.

Many things happen in this movie, and it is a spinning, confusing kaleidoscope of action, pretty scenery, beautiful people and intense dialogue. To the movie's credit, the story is a tough one to tell, given the complexities of the book. However, the direction, cinematography and the acting are superb. Blunt is spot on with her melancholy, slurring Rachel. Other characters include a red-haired man, who looks like Louis C.K. (if only!), Rachel's roommate; and Martha, played in a cameo role by Lisa Kudrow. Allison Janney plays a hard-boiled detective and Edgar Ramirez is a sympathetic psychiatrist. The movie's most memorable scene will live on in film camp history. (I, for one, will never look at a corkscrew the same way again.) Usually, you don't hear laughter during a gory murder scene, unless you're watching Christian Bale in American Psycho. Finally, in the last scene, Rachel is back on the train, presumably commuting to a new job in the city. Looking sober, happy and refreshed, she sits facing forward this time. She says she is not the girl she used to be.

Most of us were told to mind our Ps and Qs. Oddly, being a busybody eventually puts Rachel on the right track to fulfillment, an incredible outcome, given her history and the trauma she experienced. Most of us would have gone completely off the rails.