"It's people I'm scared of." [In Normal Conversation, 2000, Bob Thomas, Associated Press] Harrison Ford suffers from anxiety. In particular, he has a fear of public speaking.


Have you ever been so afraid that you could not leave your house?
Or that you collapse just from the sheer thought of seeing a spider? 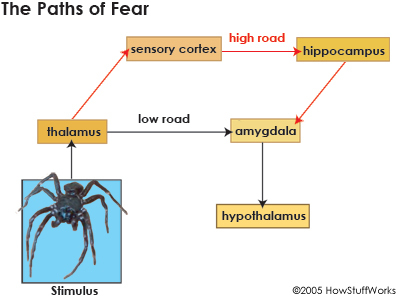 Let's look at the definition of fear: an unpleasant emotion caused by the belief that someone or something is dangerous, likely to cause pain, or a threat.

Could it be that we are sucked into a certain because of a belief?

In Psychology Today's section "all about fear": Fear is a vital response to physical and emotional danger--if we didn't feel it, we couldn't protect ourselves from legitimate threats. But often we fear situations that are far from life-or-death, and thus hang back for no good reason. Traumas or bad experiences can trigger a fear response within us that is hard to quell.
As a method for moving past fears they advocate the following: "Exposing ourselves to our personal demons is the best way to move past them."

Sounds so easy doesn't it?

But then we get hijacked-

The best of people start doing the strangest of things. They try to protect themselves through lashing out at the bad other, or they fumigate they whole property to kill those spiders-maybe better yet, they fumigate the whole town district, or more- just in case.

The other side of the spectrum are those that don't feel anything, until they have a fear experience, and that feels good-because feeling is good and so horror experiences do well. Put that in VR and the experiences become so powerful that you could just jump out of your skin. With feeling.

It's clear that the hijacking feels real, it is totally overwhelming and unforgiving because it is wired in us to help us to survive. That is the reptilian brain at work-it keeps us safe. So, if you feel like you are going to die, your reaction may be appropriately intense-even if in reality of the threat may be far less prominent than we can see in that moment.

Taking the higher road to analyze a situation is probably the best way out. It still remains to be seen whether that is so easy: both experiences are happening simultaneously, and one is ragingly strong with 30 hormones being activated with even more psychophysiological goodies following:

in science, How Fear Works


Mohammed Milad, an HMS assistant professor of psychiatry. Based at Massachusetts General Hospital, these researchers seek to tease out treatments for people with anxiety disorders such as post-traumatic stress disorder.
"Say you're in a car accident," Milad adds. "It occurs at a particular intersection at the same time a certain song is playing on the radio. For a period following that accident, whenever you go through that intersection or hear that song, you will re-experience at some level your initial fear. If over time nothing horrible happens to rekindle your memory, your conditioned response to either stimulus will lessen until the fear is extinguished. This extinction doesn't erase the initial learned fear; instead, it leads to forming a new memory, a 'safety memory.' The learned fear--the neuronal connections that the experience formed within your amygdala and between your amygdala and certain cortical structures--remains."

Tomlinson, Nicole. In Depth: Psychology. "Fear Factors." CBC News. October 31, 2007. March 15, 2008.
In systematic desensitization, the client is gradually led through a series of exposure situations. For example, a client with a fear of snakes may spend the first session talking about snakes. Slowly, over subsequent sessions, the client would be led through looking at pictures of snakes, playing with toy snakes, and eventually handling a live snake. This is often accompanied by learning and applying new coping techniques to manage the fear response.

Flooding is type of exposure technique, but can be quite successful. In flooding, the client is exposed to a vast quantity of the feared object or situation until the fear diminishes.

What if we viewed life as a therapeutic experience? Turning things on their head? Well, what if we changed our beliefs about fear, which is based upon beliefs? We could potentially use our life as an environment to reprogram our beliefs, change our neural wiring and enjoy the present moment in all its beauty. And then we could just look at the fears as a positive learning mechanism instead of being condemned to live in a reactive fear loop based upon beliefs that release 30 hormones.

And then there is Mindfulness- because if we can learn through making use of neuroplasticity to watch our emotions we have a shot at watching our hormones rage, and our psychophysiology freak out and we can stay in the high road-hopefully. Momentary freak outs totally allowed.

Are you paralyzed with fear? That's a good sign. Fear is good. Like self-doubt, fear is an indicator. Fear tells us what we have to do. Remember our rule of thumb: The more scared we are of a work or calling, the more sure we can be that we have to do it.
Resistance is experienced as fear; the degree of fear equates the strength of Resistance. Therefore, the more fear we feel about a specific enterprise, the more certain we can be that that enterprise is important to us and to the growth of our soul.
-Steven Pressfield, The War of Art

More:
anxietyGPS For The SoulMindfulness fearself-awareness
Newsletter Sign Up
An essential daily guide to achieving the good life
Subscribe to our lifestyle email.
Successfully Subscribed!
Realness delivered to your inbox

Psychotherapist, teacher and content producer for VR. Finding solutions with heart in wellness and health, a creative who plays with innovation, an artist in dialogue