We see fear's face everywhere, whether in a Congress debating assault weapons or in schools introducing lock-down drills.

And for most species fear is, of course, key to survival. Sensing danger, a healthy animal experiences instantaneous physical changes that enable it to escape; then, once the threat has passed, the impala literally shakes off its fear and runs back to join its group.

But could it be that for human animals fear itself has become a danger? To explore the possibility, a place to start is asking what humans most fear.

It is the loss of standing with others, the fear of being cast out by the tribe. Rather than being hyper-individualists, as one often hears, Homo sapiens are profoundly social creatures -- actually, the most social of species. This sense of standing is inseparable from trust. To thrive, we need to trust that we count in the eyes of others and will, therefore, be treated with respect. In a word, our fear is loss of dignity. 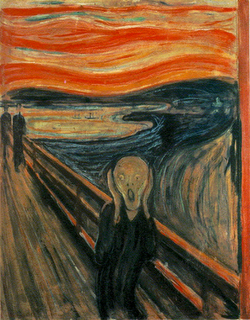 Almost equal is our fear of powerlessness. Human beings need to feel that we make a difference. Social psychologist Erich Fromm argued in The Heart of Man that what characterizes man is that "he is driven to make his imprint on the world." And later he dismissed Descartes' axiom about a human essence centered in thought, declaring instead: "I am, because I effect."

So, when these essential two needs -- for connection and agency -- are unmet, we go nuts. We try to get respect by whatever means possible. If peaceful means seem closed off, violence it is.

In his book Violence, psychologist James Gilligan asked a Massachusetts prison inmate, "What do you want so badly that you would sacrifice everything in order to get it?" The inmate declared: "Pride. Dignity. Self-esteem... and I'll kill every mother-fucker in that cell block if I have to in order to get it," Or, as another inmate said, "I've got to have my self-respect, and I've declared war on the whole world till I get it."

Pride, dignity, respect, agency -- a sense that we matter -- these are feelings largely shaped interpersonally. We depend upon the social fabric to get them. But, ours is in tatters, with fewer and fewer of us feeling a sense of belonging and more and more preoccupied with a desperate scramble for belongings.

Inequality has soared to historic levels. In 2010, the top 1 percent garnered 93 percent of all income gains. And, in countries as well as the U.S., high income inequality is linked to low levels of trust, report British scholars Richard Wilkinson and Kate Pickett in The Spirit Level.

Trapped in a giant game of musical chairs, we run faster and faster to edge out the guy ahead. For, with economic rules that increasingly concentrate wealth, we know we could be the next one kicked out, no matter how quick our pace. So we take on debt, juggle three jobs, cheat in school -- whatever it takes to stay "in."

And our children are most sensitive to this fear of exclusion. Those who've felt bullied, unable to fit in, misunderstood, without a voice in those most social of places -- schools -- are more likely to become psychotic and violent, including against themselves.

In a culture of fear of disconnection, those at the bottom feel most dismissed and discounted. Adam Smith -- the supposed, but misunderstood -- hampion of the market, more than two centuries ago grasped the devastating power of exclusion: Poverty, he wrote in the Theory of Moral Sentiments "places... [a person] out of the sight of mankind ... [T]o feel that we are taken no notice of, necessarily damps the most agreeable hope... of human nature."

In this vein, joblessness isn't just about money. It's about loss of "membership." Martin Luther King once said that "[i]n our society it is murder, psychologically, to deprive a man of a job or an income. You are in substance saying to that man he has no right to exist."

And that is exactly how many feel: A rise of 1 percent in joblessness in the U.S. is accompanied by an increase of roughly 1 percent in the suicide rate.

Overall, in our world of increasing inequalities suicide now claims more lives than homicide and war combined. Americans own more than four in 10 of the world's privately held guns, and nearly two-thirds of U.S. gun deaths in 2010 were suicides.

And when people feel "dissed," violence toward the powerless increases, too: For "each 1 percent increase in unemployment was associated with at least a 0.50 per 1,000 increase in confirmed child maltreatment reports one year later." Since the recession began in 2007, the number U.S. children killed by maltreatment has risen by about 20 percent to more than five children each day. Thus, our culture of fear gets passed down from one generation to another.

So, what can we do to break free from the spiral of fear and worsening violence?

Maybe we begin here: recognizing that our crisis is not that we humans are too individualistic, or too selfish. It's that we've lost touch with how deeply social we really are. Easing the fear at the root of so much pain and violence that generates more fear -- from suicide to child abuse to school massacres -- comes as we embrace the obvious: We are creatures who, in order to thrive individually, depend on inclusive communities in which all can thrive.

Freedom starts there. We build it by standing up for rules on which inclusive, trusting community depends: fair rules, for example, that keep wealth circulating and strictly out of public decision making; and rules that ensure decent jobs for all. This pathway out of a violence-soaked culture is no foreign "ism." It is what's proven essential to our species' thriving -- communities of trust without which we destroy, not just others but ourselves as well.

Adapted from EcoMind: Changing the Way We Think to Create the World We Want (new in paperback from Nation Books)