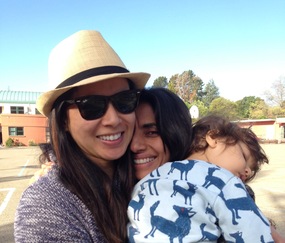 I stopped by a little produce store on my way home to pick up a few things. I had my two-year-old with me. There was a woman standing behind an outdoor fruit stand with her parcels of produce. She was moving from foot to foot, unable to stand still and trembling. When I looked her in the eyes, I saw that she was choking back tears. When I asked if she was okay, she told me she was spooked because someone had tried to grab her from outside a motel. Her terror emanated from her body in waves. I noticed she had a scissor attached to her bag.

The produce store employees kept walking outside and giving her dirty looks, as if her fear was inconvenient or bad for business. I wondered why they couldn't invite her inside the store and give her a place to sit. I asked how I could help her, but because I had my child with me, was hesitant to stay because of the scissor. As she continued trembling with fear, she said her mother was coming to pick her up.

While I was paying for my groceries, I decided to wait with her until her mother arrived. When I walked outside, I saw her striding toward a white car. They drove off with her mother's placid face behind the wheel, and the woman's face crumpling into a mask of tragedy. They drove away, but her agony and anxiety stayed with me -- the undercurrent of fear that laces its way into every woman's life, the fear of being violated.

I have felt familiar with this fear from a young age, from my own experiences, but also from the news stories of horrible things happening to girls. I was just a couple of years younger than Mary Vincent, a teenage hitchhiker, who survived after being raped and mutilated when she was 15 years old. Her attacker chopped off her forearms. He cut off her physical agency, her ability to hold something in her hand, her ability to hug freely, or to hold her hand up in protest. He only served eight years for his crime.

The experience of being female is intertwined with the fear of violence. Even so, I have always felt empowered to be a woman and would never have it any other way.

Recently, a friend brought her two children to my home for a playdate. Her oldest went to preschool with my daughter. His shoulder length black hair was tied back with a rubber band to keep it out of his beautiful dark eyes. His peach colored t-shirt with the sequined heart appliqué reminded me of a shirt my daughter has. He was adorable down to his purple and white polka dotted socks. In contrast, his brother was like a miniature linebacker Lothario in the making, handsome and strong-headed. Their parents have compassionately risen to the challenge of creating a social and academic world where it is safe for their children to express their gender organically. As I watched the children play, I couldn't help but wonder about this gender variant Latino child's future and hope for a safer world for him wherever he goes, no matter his eventual gender identity and expression.

As I watched him play, I found myself thinking about the many trans women who have been willing to give up everything -- safety, family, male privilege, societal acceptance -- to actualize their gender. As Cecilia Chung, of Transgender Law Center so aptly stated,

Statistically, trans women of color are more likely to experience discrimination and violence. According to a meta-analysis, trans women of color are 49 times more likely to have HIV when compared to the general population. So why do we still choose such a path when odds are stacked against us? Because the pain of not being our authentic (selves) outweighs any perceived risks.

Nationwide, seven trans women have been murdered in 2015 alone. The year started with a murder per week. This is chilling and tragic. I can't help but think about those old blame the victim tropes -- that women invite violence and rape based on how they are dressed. Women don't dress for violence -- not the terrified woman nearly abducted from outside a motel, not Mary Vincent who had her arms taken from her and not the murdered trans women. Trans women don't invite attack when they choose to be their authentic selves, just as cisgender women don't invite violent attack with their choice of clothing and self-adornment. However, by choosing to live their lives as their authentic female selves, despite all the risks, they enter the sisterhood -- the sisterhood of the fear of violence.

What can we do to help? Make eye contact, offer to help, be present, be a friend. And as Cecilia Chung suggests,

If you know a trans woman of color, please give her a hug and let her know her life is precious and you accept her unconditionally. It might mean giving her a glimpse of hope that she thought she had lost.

While our culture of violence isn't going away any time soon, we can make efforts each day to counteract it by creating a culture of love and acceptance. Love the woman who is shaken and scared at the produce market. Love the sweet gender variant child. Love the brave trans women who risk everything to live authentically. And most importantly, love yourself. Be safe, my friends.