We've all felt it. Anxiety before an exam; the realization that we are about to be hurt, the sick feeling when kids with Kalashnikovs kill hundreds in the streets of Paris. Once, as the crew boss on a fire crew, I was assigned to protect a house against a fast moving brush fire. Deployed at the road's edge, we got hoses ready, truck pump primed. Then the flames came at us, bigger and faster than we'd thought. Our only option was to hold our position, stay behind our fog spray and fight it. 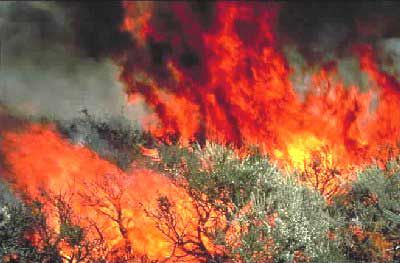 As it roared at us, one young man yelled, "RUN!"

We did, and saved the house. The flames roared around our fog pattern. We lived to chase them all afternoon before finally declaring the fire out.

These days I hear a fear that reminds me of my young firefighter. Kids ask me if they're going to have a future. They fear that climate change and other environmental harm will cut short their lives. Perhaps because of this, young people suffer record rates of affective anxiety disorder (fear of the future,) some say as high as 25%. Suicide, after years of falling rates, is at its highest level in 50 years, triple US homicides. Teen suicide is now the second largest cause of death for youths aged 15 -24.

They're not just scared of monsters under the bed. Science tells us that humanity is living beyond the planetary boundaries. Dr. Kate Raworth's Doughnut Economics shows that, despite the excesses by which our current economy extracts and quickly throws away resources, we are failing to ensure well-being and dignity for many of the world's people. Global Biodiversity Outlook 3 warned that climate change and other assaults are tipping coral reefs, the Amazon, the acidifying oceans and other ecosystems into collapse.

More recently, Human and Nature Dynamics Study (HANDY) found that civilizational collapses have occurred frequently in history, often followed by centuries of economic, intellectual, and population decline. Two features drive such collapses: "...the stretching of resources due to the strain placed on the ecological carrying capacity"; and "...the economic stratification of society into rich and poor." The study concluded that, under conditions "closely reflecting the reality of the world today... we find that collapse is difficult to avoid." But, it observed, "Collapse can be avoided, but only if population reaches equilibrium, if the per capita rate of depletion of nature is reduced to a sustainable level, and if resources are distributed in a reasonably equitable fashion."

The fire that's coming at us is worse than we thought. We can survive it, IF we stand and fight. But some idiots are yelling, "RUN!"

Books such as Dmitry Orlov's book, Five Stages of Collapse and such websites as the Collapse of Industrial Civilization, or Dark Mountain are only a few of the growing number of catastrophe merchants arguing that it is already too late. "Give up," they argue, "Don't try to do anything about the problems facing humanity. Grieve, then get over it and party. Because nothing you do can make a difference." This narrative, unless countered, will become a self-fulfilling prophecy. It's also wrong.

I'm part of a team at the Club of Rome that's been asked to spell out how to avoid collapse, to compile the evidence that humanity can entrepreneur its way out of the admittedly daunting challenges facing us. And we can. Stanford Professors Tony Seba and Mark Jacobson have each shown how to power the entire world with renewable energy, perhaps as early as 2030. They cite inexorable market forces that will enable solar to beat the fossil fuels heating the planet. Such options create more jobs and can lift people from poverty around the world.

Teilhard de Chardin said that the future belongs to those who give hope to the next generation. But hope is not a strategy. Stand with me and we'll fight together, using the best innovations that entrepreneurs are bringing to market, the best policy options, and just a touch of courage.