Excuse me, but I'm going to be a bit sacrilegious for a moment.

I'm walking the first arrondissement in Paris today -- the neighborhood that houses the Louvre, the grand sentinel of the world's art treasures.

But I doubt I'll even step foot in it. I have great respect for the works of art and the masters who created them, but quite honestly, I'm bored by most of it. I'd much rather see what's outside its walls, the graffiti around this City of Lights.

Many of you may question my love of what you deem "gang art" or "destruction of property." Yes, graffiti has its undesirables, who unfortunately destroy the landscape of our inner cities. But I put them in the same category as those ambulance-chasing attorneys who muck up our legal landscape and drive up our medical costs because of their incessant suing.

Conversely, there are good, talented graffiti artists who deserve our respect. Much of what these young people paint has revolutionary messages intertwined in their canvases. Their work brings awareness to social injustices such as hunger, human rights and child trafficking. Much of it dares to make political statements in countries where it's illegal to speak freely. Not unlike Picasso, who took on the atrocities of the Spanish Civil War, or da Vinci, who introduced wild ideas such as flying machines, these artists aim to be change agents and, may I dare say, should be placed alongside the greats. 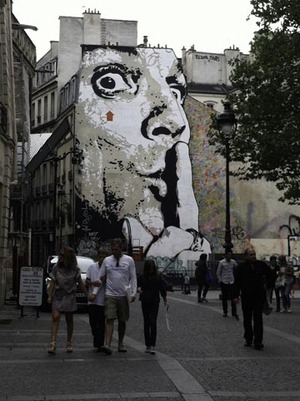 Wall mural outside the Centre Pompidou in Paris

On Saturday, as I walked the Le Marais (the 4th arrondissement of Paris), I happened on an art exposition that included several graffiti writers and their work. As I strolled around the exposition hall, I witnessed innovation in artwork like you'd never find in one of those stuffy old museums. At one corner a graffiti writer painted with such energy and furor that a large crowd gathered to watch. 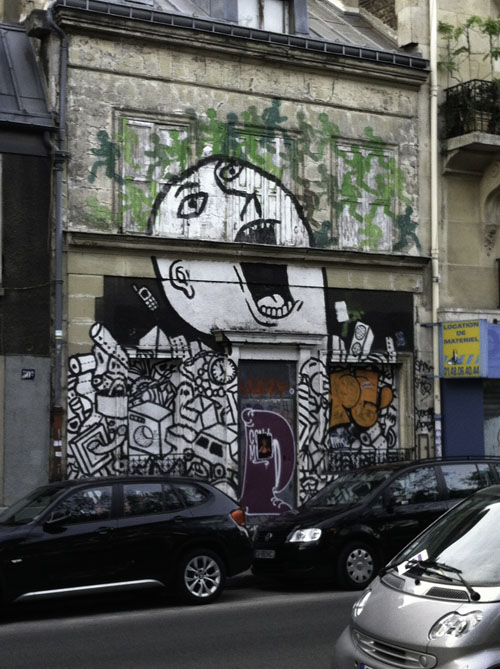 Graffiti in the 12th arrondissement in Paris

Yes, I must admit I once was afraid of the mere mention of graffiti. I challenge you to look at it and its message with the same wonder and appreciation as you do when you view the Last Supper or the Statue of Liberty. Peek around corners and in dark alleys where these artists dare to paint. I guarantee you that you'll be just as -- if not more -- intrigued by what's on the outside of the Louvre's walls as is on the inside. 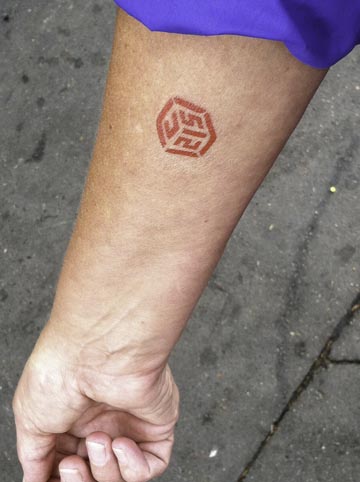 Two young people were selling temporary tattoos, tags of local graffiti artists including one of my favorite, Paris' own C215

(An aside: During my 30-day walk of Manhattan in the summer of 2011, I came across the mesmerizing mural art and graffiti in the neighborhoods of East Harlem and Spanish Harlem. Feeling the pull to know more, I contacted this art form's foremost photographer, Martha Cooper of New York. I was quite honored that through Ms. Cooper, I received a formal introduction to this wonderful art. She has published many books on the subject, not to mention the history she has chronicled through her photography.)