On Friday, April 20 I sat in an office at Bryant University in Smithfield, R.I., biting my nails. I was minutes away from speaking to first-year students about being an out LGBT collegiate athlete. I was not the only one speaking that day: Jeff Sheng, photographer and creator of Fearless, an acclaimed exhibit featuring portraits of out LGBT athletes like me, was set to speak, too. His artwork had been up in Bryant's student center since the previous Monday. I had a special connection to the exhibit and to him because he'd shot my photo for Fearless earlier this year.

I felt a mix of anxiety and excitement as I waited for Nanci Weinberger, a Bryant University professor and Bryant Pride member, to return from showing Sheng his own exhibit in the student center. She burst in the door. "Well, Sheng is a really nice guy," she said, and looked at me with wide eyes, "so nice, in fact, that he reacted calmly when I took him over to see his exhibit to find that all his portraits were gone." I looked up at her. "Yes," she said. "That's right. Gone."

My mind raced. Professor Weinberger asked me if I still felt comfortable speaking. I nodded, but first I wanted to see the space where the photos had been. She took me to a stairwell in the student center. I looked up. The sun shined in through the empty glass walls, mottled now by specks of grey putty. A boy walked down the stairs and stared at us as we stood together in silence. The entire exhibit had been stolen. It was true.

Since I came out as a lesbian my junior year at boarding school, I have never witnessed a premeditated hate crime. But that does not mean it has been easy. I am now a sophomore at Amherst College, an elite liberal arts school with what's advertised as an open-minded student body. When I started at Amherst, I was confident and ready to be out in a new community. However, upon my arrival, girls told me I was too pretty to be gay. Guys told me I was too hot to be a dyke, or that they would turn me straight. I discovered I was one of the only out varsity athletes at Amherst, and felt isolated. I was bullied by a teammate for my sexuality but did not feel I could speak out. Closeted athletes told me their secrets and then ignored me or talked behind my back. Although much of the homophobia I've witnessed at Amherst is often indirect, or even meant to be complimentary to me, it still stings with ignorance. I've often wondered: If it is this hard to be an LGBT athlete at Amherst College, what is it like at other campuses around the country?

I would get a taste of this at Bryant that day. After leaving the student center to walk to my first class, I looked around me, paranoid. I had begun the day excited to speak at a school in my home state. Now, even though it was a beautiful day and students who looked just like me were out and about, smiling and laughing, the campus suddenly felt dangerous. Had I unknowingly seen the person responsible for this? What if my portrait had been in the stolen Bryant exhibit and students knew I was gay? I wasn't in Fearless yet, I reassured myself. I was safe. Catching myself wanting to hide made me feel ashamed, angry, and determined to speak to students, all at once. 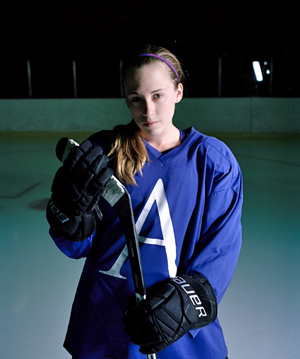 I arrived at my first class and sat at the front, fidgeting as the classroom filled. My host, Professor Thom Bassett, projected my Fearless photo and one of the empty stairwell, side by side, onto a screen behind me. I looked over my shoulder and saw myself, in full hockey equipment; in a matter of hours, this symbol of pride had been turned into a target on my back. I introduced myself hurriedly, but as class went on, I regained my footing. The students' faces softened as they engaged me with questions: What was the hardest part of coming out on a sports team? How do you feel about the person who stole Sheng's portraits? What is your opinion of Bryant now? They inquired with open faces, shy smiles, and little nods. Many were angry and embarrassed of their school. I could feel myself shifting in their eyes: I was changing from a statistic, an outlier, an "other," into a peer.

Still, after class, I left Bryant feeling exhausted. As the hours passed, the events of the day became more disorienting. I arrived back at Amherst late that afternoon and retreated to my bed. I didn't leave it for the rest of the day.

Over the next few days I stayed in frequent touch with Professor Bassett. I was shocked to hear that Bryant's president had not issued any statement about Sheng's portraits. However, a few days later, I learned that Bryant would be launching an impromptu ally campaign in response. Although this reassures me that there will be more dialogue at Bryant University about this issue, it does not change the fact that in 2012, in a "liberal" area like New England, hate crimes occur. Though I am relieved that this did not happen at Amherst (and, in a way, it makes me more grateful I attend there), the fact that Fearless was stolen at Bryant (after not having a problem at 60 locations) tells me it could.

Going forward, I will carry this story with me, like I do all the others that come with being an out lesbian and an athlete. Now, I can add this to the list: the day I saw an empty stairwell, stripped of the young athletes I had first emulated, then joined. And how I, like them, can still be ripped down and hidden on any day, anywhere.