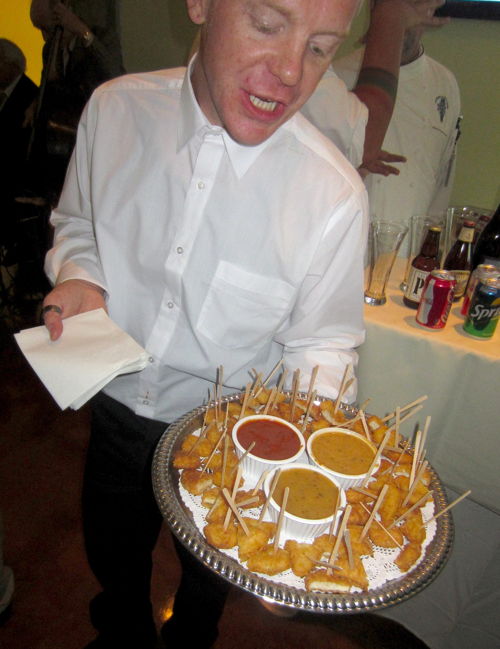 These, along with the many lush dishes served later that night to a satin-and-cufflinks crowd around linen-draped, candlelit tables to the mellow sounds of a jazz band, were made entirely with ingredients that are used in typical McDonald's restaurants.

Staged last week at San Francisco's California Culinary Academy, the gala was called McDonald's Unwrapped, and was meant to raise (1) awareness regarding the quality and diversity of McDonald's ingredients and (2) money for the Ronald McDonald House Charities, which give lodging and support to sick children and their families.

As regards item #1, the fast-food monolith yearns to dispel those rampant myths that pervaded my youth and persist in ever-shifting shapes to this day -- e.g., that McDonald's adds extra syrup to its Coke and that McDonald's milkshakes contain no actual milk. Not to mention pink slime.

The gourmet chefs in the kitchen that night (depicted below, left to right) were Ryan Scott, former Top Chef contestant and kingpin of San Francisco's Market & Rye; Beverlie Terra of Santa Cruz's Chaminade Resort & Spa; and Sophina Uong, executive chef of Oakland's Picán: A Taste of the South. To their creations, devised especially for this event, they were permitted to add seasonings not found at McDonald's, but everything else in the dishes had to come straight outta McD's. 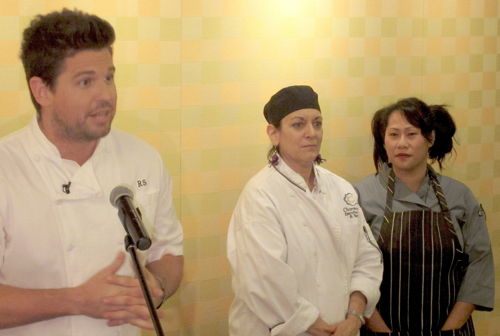 "When they asked me to take part in this challenge, I was skeptical," Terra told the crowd. "But then I met some of the local farmers from Watsonville and Fresno who produce the tomatoes and strawberries and beef that McDonald's buys, and I thought: I can do this." 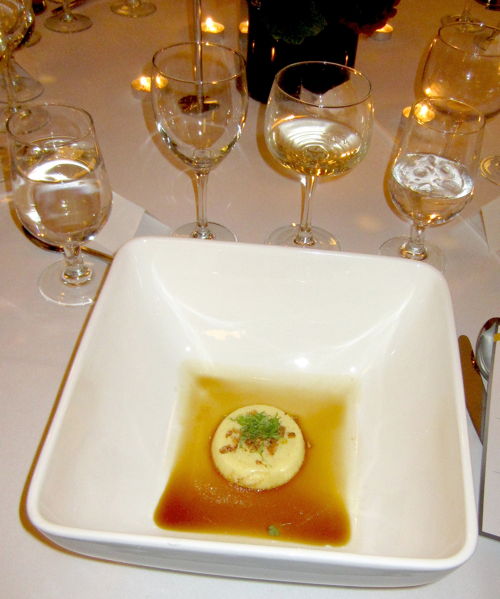 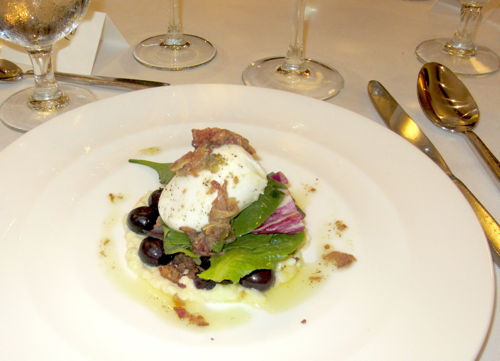 "I took blueberries and pickled them," Scott announced. "I took English muffins and made croutons out of them. I took bacon and made it crispier than crispy can be."

Seated at my table was Scott Rodrick, who owns over 25 McDonald's restaurants.

"Looking down from the big hamburger stand in the sky, Ray Kroc" -- McDonald's founding franchisee -- "would be smiling right now," Rodrick said. 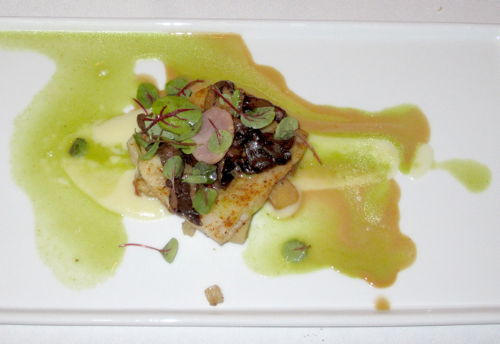 Scott explained that he set out to make a main course from "something near and dear to my heart: hash browns, damn right. I made it happen with a little flour, a little egg, a little Parmesan, a little cream and a little butter." For the sauce, Scott ground together the same chicken, ham and beef that normally goes into McNuggets, McMuffins and Big Macs, then braised this mixture for 24 hours -- "low and slow," he beamed.

It was pretty astounding to note the wide variety of ingredients available to the chefs.

Rodrick told me that each McDonald's entrée is made to order by living breathing employees, contrary to the popular belief that all the sandwiches are pre-assembled, prepackaged, pre-frozen and microwaved. McDouble sans onions? Filet-O-Fish with ketchup instead of tartar sauce? Sure, Rodrick said:

"Half the orders at my restaurants are customized. It's no big deal for us to modify any sandwich."

"I've learned a lot about these misconceptions," Rodrick sighed. With every myth that erupts, "there's a dialogue going on about our business, and we have a responsibility to engage in that dialogue." If San Franciscans now want to know from whence fast-food chains source their ingredients, middle America will soon start asking where the meat comes from. We need to be prepared." 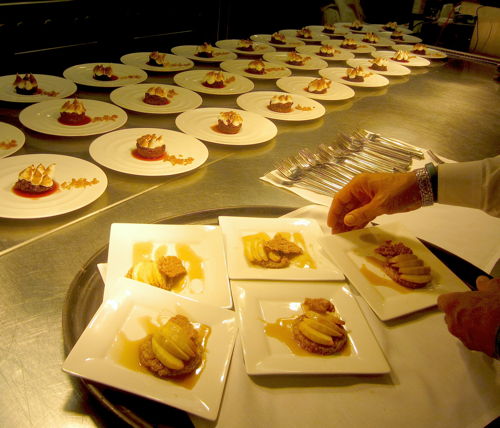