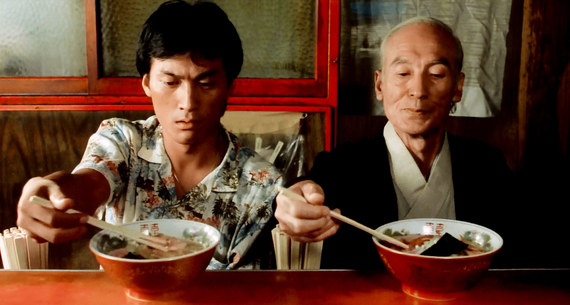 Food is not only good to eat; it is also increasingly enjoyed through media that range from one's smartphone to cinema. In today's popular culture, food's visual representations play a role as relevant as its actual consumption, allowing for new forms of sharing and circulation. A specific contemporary way of looking at food is easily identified in communication forms as diverse as cookbooks, advertisement posters, reality TV, and commercials. Both critics and scholars have used the expression "food porn" to refer to this visual language in which food is always glistening and luscious, with lights playing on it to heighten its sensuality.
This style employs recognizable shots, from the ingredient detail to highlight its material qualities to the hand shots that glorify a cook's dexterity and skills, moving to larger shots that include table, tools, and dishes, as well as the face of the cooking protagonists, all the way to wide shots that reveal the environment and the interaction with other characters. When food porn is applied to film, editing can vary from meditative, slow takes to frantic rhythm, depending on the filmography. Amplified sounds of simmering water or sizzling meat, much louder than ever experienced in reality, contribute to draw viewers into what they see and cannot, obviously, taste or smell.
These elements are constitutive in what is often called the "food film" genre, the main topic of the new book I wrote with Laura Lindenfeld called Feasting Our Eyes: Food Film and Cultural Identity in the United States. Both avid consumers of the genre, Lindenfeld and I question it to uncover how it participates in the formation and the diffusion of ideas and values about important aspects of our identity such as gender and sexuality, class, age, as well as race and ethnicity. We discovered that as fun as they can be and as apparently progressive they may seem in their celebration of difference, originality, and creativity, food films tend to reveal a quite traditional - at times conservative - outlook on society.
Of course, that is not always the case. Recently, two great works that propose an alternative approach to food in film, albeit in different ways, have been re-released: Tampopo and Daugthers of the Dust, which had a huge impact on how I look not only at the genre, but also at movies in general. For different reasons, both refuse the voyeuristic attitude that allows spectators to revel in the more sensual, aesthetics aspects of culinary cultures that are not their own, without actually engaging with them neither symbolically nor materially. Films like Woman on Top or the Mistress of Spices are two clear examples of this approach, which excludes whole groups from full cultural citizenship and does not contribute to establish real dialogue and intercultural communication.
Tampopo, Juzo Itami's 1985 wild romp through the Japanese gastronomic landscape, has been restored and presented in 4K, giving new brilliance and depths to the images. Tampopo is often hailed as the first true food film, due to the central role cuisine and eating play in the plot and in the characters' development. The story of the motley crew that follows a ramen shop owner in her quest to discover the best recipe for her specialty allows the filmmaker to uncover many quirks and downfalls of Japanese society in the 1980s, torn between unbridled consumerism, pretention, and conformism. As an insider, Itami is not at all attracted to the aspects that most Western viewers would find intriguing and exotic. His tone is ironic, at times surreal; as frequently as it appears on the screen, food never presents the "porn" undertones that would become a mainstay of the genre in the years to come.
Also Julie Nash's 1991 Daughters of the Dust has been restored to mark its 25th anniversary. Set in the early 1900s in a Gullah village on one of the Sea Islands off the coast of Georgia and South Carolina, the film places food front and center in the lives of the community it represents. Although Nash's work cannot be considered a food film, food production and preparation, a daily occupation for the female protagonists, are featured frequently but discretely, central to their lives as its consumption. Daughters of the Dusk is not so much interested in allowing strangers to peep in the Gullah culture as to understand the profound changes that were assailing it at the time. Needless to say, no food porn is to be enjoyed.
The two films indicate that representing cooking and eating on the silver screen outside of the "food porn" canon is possible, effectively disrupting the limitations of the genre. If you are interested in these topics, join us for a public conversation on food and film at The New School on November 28.