A newly discovered titanic tyrannosaur is the biggest feathered dinosaur yet, reaching up to 30 feet (9 meters) long and weighing more than 3,000 pounds.

While smaller than Tyrannosaurus rex, the new species, named Yutyrannus huali — meaning "beautiful feathered tyrant" — is still 40 times the weight of the largest feathered dinosaur known previously, Beipiaosaurus, which was described in 1999.

"Yutyrannus dramatically increases the size range of dinosaurs for which we have definite evidence of feathers," study researcher Xing Xu of the Chinese Academy of Sciences in Beijing said in a statement. "It’s possible that feathers were much more widespread, at least among the meat-eating dinosaurs, than most scientists would have guessed even a few years ago."

The researchers found three well-preserved fossils of the species in a dig in Liaoning Province, in northeastern China, the same place Xu and his colleagues discovered Beipiaosaurus. [Album: The World's Biggest Beasts] 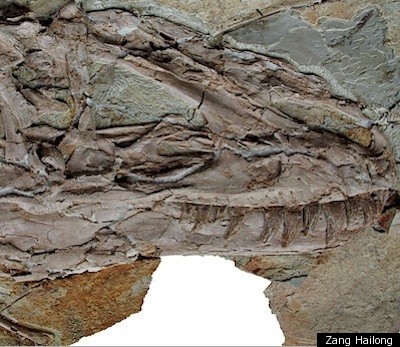 From known fossils, researchers think this group started out as small, feathered dinosaurs and grew into large, scaly tyrant lizards only later in the Cretaceous. Yutyrannus huali is the first example of this type of large, T. rex-type dinosaur in the early Cretaceous.

The find indicates that tyrannosaurus-type dinosaurs played a major role as large predators earlier than  thought.

The researchers discovered fossils of the dinosaur's feathers and were able to clearly make out that the large dinosaur was one shaggy predator.

"The feathers of Yutyrannus were simple filaments," Xu said. "They were more like the fuzzy down of a modern baby chick than the stiff plumes of an adult bird." The hairlike feather filaments were about 6 inches (15 centimeters) long and probably covered the majority of the animal's body.

The feathers weren't used for flight, but to keep the giant lizard warm, an interesting adaption in dinosaurs, a group typically thought of as "cold-blooded," Xu said.

"The idea that primitive feathers could have been for insulation rather than flight has been around for a long time," study researcher Corwin Sullivan, a paleontologist at the Chinese Academy of Sciences, said in a statement. "However, large-bodied animals typically can retain heat quite easily, and actually have more of a potential problem with overheating. That makes Yutyrannus, which is large and downright shaggy, a bit of a surprise."

The explanation may be climate-related, the researchers say. While the Cretaceous Period was generally very warm, Yutyrannus lived during the middle part of the Early Cretaceous, when temperatures are thought to have been somewhat cooler than the Late Cretaceous, when T. rex lived.

The study was published today (April 4) in the journal Nature.