The bladed, quill-like feathers of modern birds are essential for flight, and over millions of years they have become highly specialized for this purpose. But this may not be the reason they first evolved, say researchers studying an unusually complete fossil of the world’s first bird, Archaeopteryx. Instead, the team believes birds first grew these feathers for other purposes, such as insulation or mating display. The discovery raises the intriguing prospect that flight may have developed multiple times in the ancestors of birds.

Modern birds have many different types of feathers. The most important are down feathers, the small, fluffy ones that keep the bird warm, and “pennaceous” feathers used for flight. These are stiffer, with a thick stalk and a blade on either side. Many paleontologists have argued that pennaceous feathers are so well adapted to move air efficiently that they must have evolved for this purpose after birds' ancestors took up primitive types of flying or gliding.

But recent studies of Archaeopteryx suggest otherwise. This raven-sized flying creature with sharp claws and teeth lived about 150 million years ago in the late Jurassic period. In previous specimens, the tails were often not properly preserved, sometimes because paleontologists chipped them off while trying to examine the skeleton. In 2011, a new specimen with a fully preserved tail was discovered in Bavaria. It had pennaceous feathers on its wings that were clearly adapted for flight: They were asymmetrically shaped and overlapping in such a way as to make them more aerodynamic. But it also had pennaceous feathers on several other parts of its body, including its hind legs.

Christian Foth and Oliver Rauhut of the Bavarian State Collection for Palaeontology and Geology at Ludwig Maximilians University in Munich, Germany, working with photographer Helmut Tischlinger, wondered why feathers that had evolved to aid flight would have spread to the hindlimbs. They saw no evidence that the hindlimb feathers were aerodynamic.

The researchers examined other recently discovered fossils of primitive birds and their antecedents, mainly from China, that had preserved details of feathers. They noticed that many creatures with pennaceous feathers would clearly have been unable to fly because, for example, their arms were too short. Furthermore, different animals had the feathers in very different places. Such large variation would be unexpected if the feathers had been used for flight. “Aerial locomotion obviously places rather tight constraints on an animal,” Rauhut says, “because, if there's one fault in your design, you're dead.”

Writing online today in Nature, the researchers propose that, after pennaceous feathers evolved, they became adapted for different purposes in different creatures: to attract a mate, like a peacock's tail, or for insulation. Later, when the animals took to the skies, the feathers were recruited for flight, and eventually became more flight-specialized. Intriguingly, this suggests that the origin of bird flight was perhaps not a single event, the researchers say, but that different ancestors of birds may have begun flying independently.

The new specimen “fills in a lot of blanks,” says paleontologist Mark Norell of the American Museum of Natural History in New York City. He suggests that the shape and elaborate patterns observed in some early pennaceous feathers makes it likely that they originally evolved for mating display.

Vertebrate paleontologist Nick Longrich of the University of Bath in the United Kingdom, meanwhile, agrees that the large hindlimb feathers are an interesting discovery, but he suspects they may still have originally had an aerodynamic function. “I think they're airfoils,” he says—the structures on aircraft wings that provide lift. The hindlimb feathers “don't look like insulatory feathers to me: They're really long, they overlap the same way flight feathers do, and the fact that they curve is a characteristic flight feather feature.” 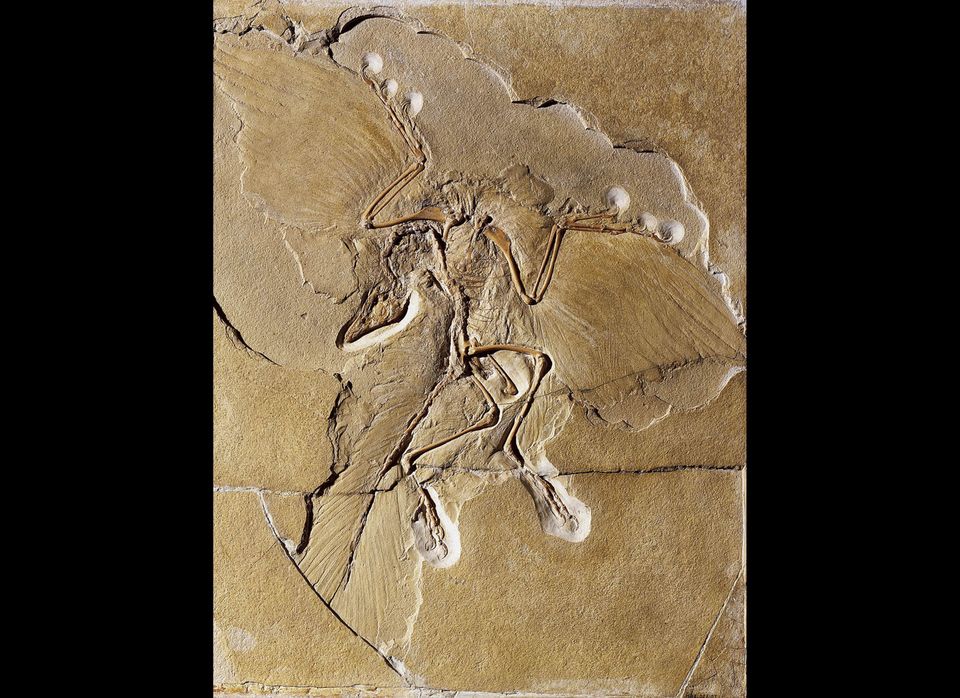