It was a few days before the beginning of Lent when I spotted the tree, a valley oak standing at the trailhead. I was on retreat at the Bishop's Ranch, a bucolic spot deep in California wine country and I had intended to take a brisk solo hike in the woods. But the old valley oak, its deadness, stopped me in my tracks.

The tree was pretty much done for; only two limbs showed signs of life. The trunk was a pallid gray in some places, a rich, rotten brown in others. Except for the two fresh limbs, awash with leaves and growing from the decay, the tree seemed a goner.

The live part of the tree was pretty, but it was the dead part that caught my eye. It was riddled with life. On the side of the trunk nearest the trail, for example, grew a lush, inch-deep patch of moist, green moss. On another side of the old tree, 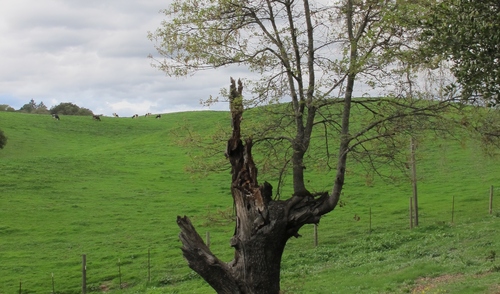 The valley oak tree, half dead, at Bishop's Ranch, a retreat center run by the Episcopal Diocese of California. Photo by Barbara Newhall

flat pink and purple mushrooms sprouted, one atop the other, like dirty dishes stacked in the kitchen sink. Still farther around the tree, a weird lump of fungus pooched out from a crack like a hunk of gorgonzola.

I walked around and around the tree, discovering something new and vigorous with each pass. Another hiker joined me. She told me that back home she was taking horticulture classes.

"This is the phloem," she said pointing to a spot where the bark had fallen away, exposing the tree's innards. "The phloem takes nutrients from the leaves to the rest of the tree. And this," she said, "would be the xylem, which brings water up from the roots."

My companion was as taken with this tree as I. Together we circumambulated it. Around and around we went, inspecting this, puzzling over that.

"Look here," she said. On the back side of the tree, weirdly enough, were a dozen or so of the tree's own acorns tucked into cracks and holes in its core. In some places the cracks had been expanded into holes. "Woodpeckers, I'm pretty sure."

A few more circles around the tree and my companion resumed her hike. I lingered on, fascinated by how truly dead and rotten the old tree was - and how aggressively other life forms were feeding on its helplessness.

For some, this old oak might serve as an upbeat meditation on the eternal cycle of life and death. Life endures, or so the thinking goes. Life lives on; rotten oak trees become 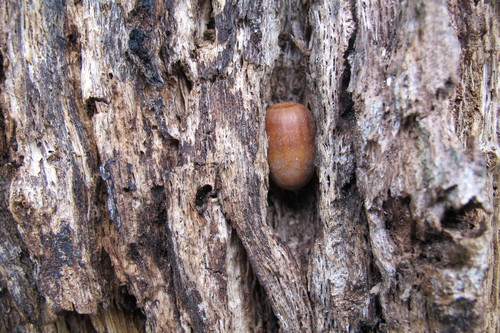 Acorns tucked into the cracks of a dying oak -- the work of woodpeckers? Or children? Photo by Barbara Newhall

nurseries for fungi, mold, burrowing insects, and the next generation of valley oaks. Ruptures in a tree trunk become opportunities for enterprising woodpeckers.

Yes, life goes on. But not for that tree, and not for me. That tree will be dead one of these days - and so will I.

The fifth-century Saint Jerome kept a human skull on his desk to remind him of his mortality - memento mori -- to remind him of death, of the terrors of hell and the sinful temptations of his body and this world.

Why do I write an essay on the deadness in my future? Why do I drag myself and my readers through the Valley of the Shadow of Death? (If you're still with me, that is, and you haven't moved on to sunnier thoughts.)

I do the memento mori thing not to berate myself with how sinful and tempted and demented I am. Not at all. Jerome got it wrong, in my opinion. No, I take note of dead stuff in order to wake myself up, to remind myself that I'm actually alive, right now, in this world.

One day I was walking around on planet Earth, inspecting and photographing the heck out of a half-dead tree - and having a blast doing it. A few weeks later, I was back in my writing studio, still on Earth, poring over my photos and being entertained by that old oak tree all over again.

These moments, this particular moment in the world wherein I find myself gazing into a computer monitor, my shoulders aching a bit, my eyes going bleary - it's gotta be some kind of miracle. A gift from somewhere, or something. As I see it, my only obligation, if I have one at all, is to open my eyes and lungs enough to take it in.

© 2015 Barbara Falconer Newhall. All rights reserved.
More wrestling with God stories at "Why Pray? Some Thoughts From Karen Armstrong" and "The God Question: 'I Don't Know and You Don't Know Either.'"

A version of this essay first appeared on BarbaraFalconerNewhall.com, where Barbara riffs on life, family, books, writing, and her rocky spiritual journey. Her interfaith book, "Wrestling with God: Stories of Doubt and Faith," is available from Patheos Press.