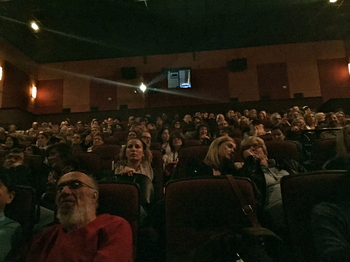 (Audience at the Metro Theatre)

Andrea Meller was on hand for the Q & A after the World Premiere of her documentary, "Now En Espanol," a film that follows the lives and careers of Latina actresses who dub Desperate Housewives into Spanish. The film weaves in the feel of the popular series as a sort of mockumentary while also giving a very real look into the unpredictable hills and valleys of working in Hollywood as a Latina actress. 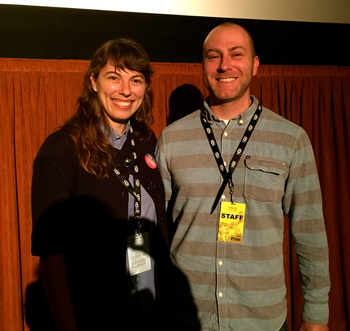 Director Andrea Meller spoke about how she came to make this documentary. "In 2005, I read an article in the New York Times about these actresses and it interested me. It took me a long time to make the movie. I'd had a lot of trouble raising the money. The bulk of the shooting was done in 2008 and 2009. I had no idea how many bad things would happen for the actresses during this time." On why she plays into and mimics the show Desperate Housewives, Meller said, "I knew I wanted to play with the show. I wanted to make a fiction film, inside the documentary. I rented a house in Pasadena that looked like the same neighborhood. There was always an idea to play with the show. My intention was to put Latina women on the screen while following their dream. It mirrored me following my dream."

Incidentally, more Latinos see movies in the U.S. than any other ethnic group. Latinos make up the largest audience base in the United States.

"Agave Is Life," is a documentary exploring the history and importance of the agave plant in the cultures of Mexico and the Southwest. The filmmakers and archaeologists, David O. Brown and Meredith L. Dreiss, bring their vast research and teaching skills to the film in a very satisfying way. It took six years to make the film. They had 60 hours of film! "We tried to put 10,000 years in one hour." Edward James Olmos narrates. 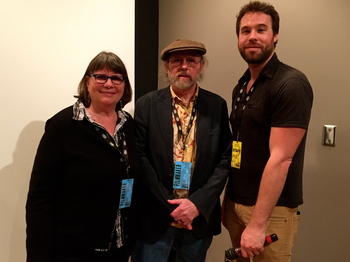 "Sins of the Father," directed by Andrew Piddington and produced by Graham Leader had its World Premiere at SBIFF. The film "has been 25 years in the making." This film has a complicated past to say the least. Originally, the film was released as "Shuttlecock" in the early 90's with mixed responses, mainly negative. "Sins of the Father" is an attempt on the part of the director and producer, to redeem the earlier film, to remake it, better. This version therefore is a continuation and a completion of the earlier film, "Shuttlecock." Both films star the late Alan Bates (as Major James Prentis) who died in 2003. The filmmakers shot new sequences with the Major's son, John, (played by Lambert Wilson), and his grandson, bringing in the layer of present time. They were able to reassemble key members of the original cast whose presence adds a rich dimension to the new version. The story behind this film makes it a fascinating tale. 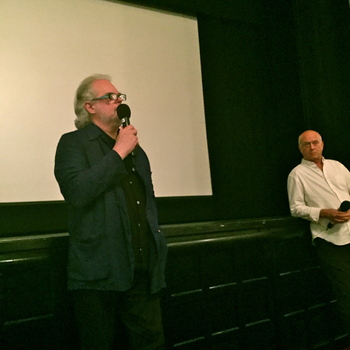 "We thought we might find a way to re-address it. We gave the new film a much deeper context. It is a dream to re-address, to use the same actors, to re-visit their same roles. We wanted to add layers of emotion."

"Time is a major conceptual element in the film. Time is very plastic in film. You can create dream sequences. The film is set in 1986. What we had to decide was how to treat each time zone. To create the historical with a different look. Instead we made it seamless. How we cross time (1942) in the minds of the lead, we used Super 8 film, that immediately gives you the quality of time."

"Shuttlecock" was based on the novel by Graham Swift. "The story was initially the book but it is very different." 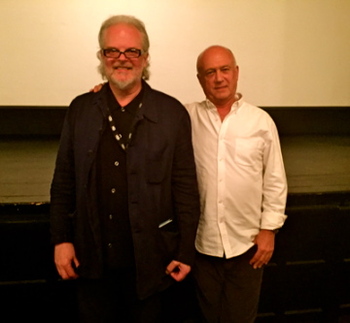 The final film of my day was the World Premiere of a German film directed by Ingo Haeb called "The Chambermaid." Michael Albright, SBIFF, described it as "a very strange and unique film." I concur with that. I think the best way to describe this is that it is "an art film." It is not what I expected nor is it like anything I have ever seen before. I came out thinking, "how did this filmmaker come up with this story?" A person walking out of the film asked very nicely, "Now why did that film have to be made?" Since we all know how hard it is to make a film and get funding and how the story needs to really mean something to you as a filmmaker, I came away asking the latter question, too. That's what's fun about film festivals though! There is variety and something for everyone!