Janet Yellen and the Federal Reserve just declared the U.S. economy well enough to leave intensive care, though it is not yet the picture of health.

The Fed announced on Wednesday that it was ending a two-year stimulus program designed to keep interest rates low and boost the economy. The program -- known as "quantitative easing," or "QE3," for the fact that it was the third round of such stimulus since the financial crisis -- involved buying billions of dollars of bonds each month. The central bank has been cutting back on these purchases with every Fed meeting since December 2013. On Wednesday it said it was making its last such purchase this month.

In pulling away support for the economy, the Fed is taking a chance that recent signs of economic strength are more reliable than recent signs of weakness. On the one hand, unemployment has tumbled to 5.9 percent, the lowest in six years, and employers have added more than 200,000 jobs per month so far this year. GDP growth jumped at a 4.6 percent annualized rate in the second quarter. Gasoline prices are at their lowest in four years.

On the other hand, wages have stayed stubbornly flat, and much of the drop in unemployment has been due to workers checking out of the labor market, meaning they're no longer counted as unemployed. Financial markets have been turbulent lately, and economies around the world seem to be teetering on the edge of recession.

One of the Fed's policy makers, Minnesota Fed President Narayana Kocherlakota, dissented from the Fed's decision, arguing the economy was still too weak for the Fed to end QE3. He also argued that the Fed should have shown more alarm about the prospect of low inflation.

Still, in announcing its decision, the Fed sounded fairly optimistic about the economy, noting the job market's recent good news and saying that consumers and businesses have been slowly increasing their spending.

The Fed also chose to look on the bright side of one ominous development in the economy: Inflation is still lower than the Fed would like it. Low inflation might sound great to people dealing with rising food prices, but if prices generally stay too low for too long, that risks "deflation," or falling prices. When deflation happens, people stop spending while they wait for prices to fall further, and the economy suffers. See Japan in the 1990s or the U.S. during the Great Depression.

The Fed kept pumping stimulus into the economy in one way: It kept its target for a key short-term interest rate near zero and promised to keep it there for "a considerable time." This interest rate, the federal funds rate, which influences other borrowing costs throughout the economy, is the Fed's traditional policy tool for slowing down and speeding up the economy.

When zero-percent interest rates weren't enough to help an economy gutted by the financial crisis and Great Recession, the Fed turned to the extraordinary measure of buying up bonds to drive interest rates even lower. That bond-buying has left the Fed with a balance sheet worth $4.48 trillion, up from less than $1 trillion before the crisis. 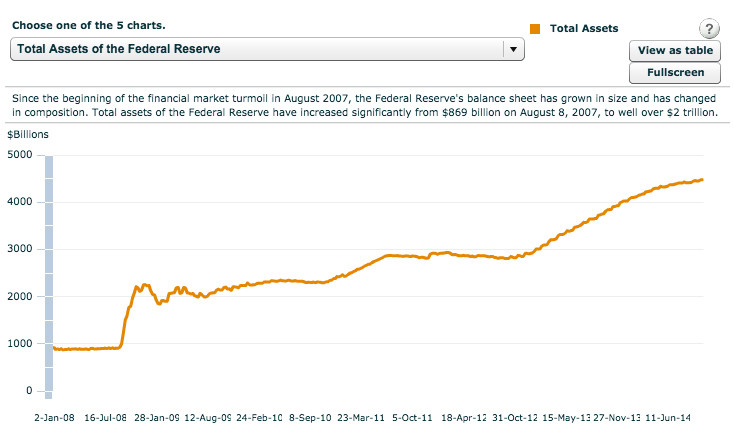 The Fed's balance sheet has quadrupled in size.

What remains to be seen is the effect of the program's end on the economy and financial markets. The Fed has been warning of the end of QE3 for several months, giving markets time to adjust, and stock prices have recently soared to record highs despite the looming end of QE3.

As for the economy, interest rates have stayed relatively low even as the Fed has cut back on bond purchases. The rate on a 30-year mortgage was recently just a little more than 4 percent, up from a record low of about 3.35 percent, set just as the Fed was beginning QE3, according to monthly data from Freddie Mac.

Fed officials have long maintained -- or hoped, anyway -- that the central bank's enormous holdings of bonds will keep helping the economy even when it stops buying more.

Interest rates rise as bond prices fall, and as long as the Fed is sitting on a mountain of relatively low-risk bonds, then bond prices should stay high, and investors will still be forced to go buy riskier stuff like corporate bonds and stocks.

Some Fed officials have fretted publicly about the unwanted side effects of their easy-money programs, including pumping up market bubbles and filling the coffers of the 1 percent while not doing much for the other 99 percent. Some Fed officials and economists have also been skeptical that QE was worth such risks. Many on the Fed now seem more inclined to try to use other tools to help the economy.