One of the more unusual weeks in markets ended with a whimper as equities traded marginally lower on Friday, but -- believe it or not -- ended the week in positive territory. Yes, both the S&P 500 and Dow Jones indexes closed the week higher (see chart). 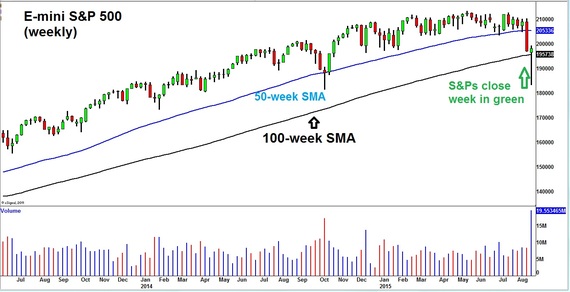 Does this mean the correction is over? No, but it has mirrored the most recent serious correction from last October. Just when the market had folks worried that a major top had been set, it whipsawed and made new all-time highs before the end of the month. This time it may be more serious as a significant technical support level was broken: the 50-week moving average was breached on a closing basis last Friday for the first time since 2011. But the S&Ps managed to settle above the 100-week MA despite severely breaching it earlier in the week (see chart above).

With worry regarding the Chinese economy subsiding, at least temporarily, the focus of all the newswires was on the Fed meetings in Jackson Hole, Wyo., and whether any of the Fed Governors would provide guidance on what they will do at the Sept. 16-17 FOMC meeting.

There were Fed hawks who insisted that a tightening was still on the table, but nearly all indicated that the recent market volatility will be taken into account.

Reuters quotes St. Louis Fed President James Bullard, a hawk on the committee, as still being in favor of a tightening though he acknowledged that colleagues were concerned over recent volatility. According to Reuters, Bullard said, the Fed's policy committee "does not like to move right in the middle of a global financial storm."

They say the quietest place on Earth is in the eye of the storm, which perhaps is the reason comments from Fed officials are so remarkably obtuse. The biggest factor on the market is and remains what they do in September.

My favorite line is from Fed Vice Chairman Stanley Fischer, who is quoted as saying, "It's early to tell." Six years into a recovery and a zero-interest-rate-policy and it is too early to tell.

Cleveland Fed chief Loretta Mester, another so-called hawk who, was recently quoted in the Wall Street Journal, according to Reuters, as saying, "I want to take the time I have between now and the September meeting to evaluate all the economic information that's come in, including recent volatility in markets and the reasons behind that."

Really! The reasons behind it?

What I find so amusing with this is the utter lack of self-awareness. The recent sell-off arguably was started as positive housing news last week appeared to lock in expectations of a September tightening. Go back two weeks, two months, heck even two years and nearly every story on any economic report--regardless of how significant the data is or positive or negative it is--is couched in how it would support or deter a Fed rate hike. The Greek default and Chinese currency devaluation were welcome respites from the constant Fed watching.

Uncertainty creates volatility and the greatest uncertainty in our economy involves when the Fed will finally raise interest rates for the first time in nine years. If they are worried about volatility, they should end the speculation.