For the first time, the Federal Reserve has explicitly linked interest rates to unemployment.

Rates will remain near zero "at least as long" as unemployment remains above 6.5 percent and if inflation is projected to be no more than 2.5 percent, said the Federal Open Market Committee in a statement Wednesday.

Put to one side the question now obsessing stock and bond traders -- whether the new standard means higher interest rates will kick in sooner than the middle of 2015, which had been the Fed's previous position.

By linking interest rates directly to the rate of unemployment, Bernanke is explicitly acknowledging that the Federal Reserve Board has two mandates -- not just price but also employment. "The conditions now prevailing in the job market represent an enormous waste of human and economic potential," said Fed Chairman Ben S. Bernanke.

These are refreshing words at a time when Congress and the White House seem more concerned about reducing the federal budget deficit than generating more jobs.

But the sad fact is near-zero interest rates won't do much for jobs because banks aren't allowing many people to take advantage of them. If you've tried lately to refinance your home or get a home equity loan you know what I mean.

Banks don't need to lend to homeowners. They can get a higher return on the almost-free money they borrow from the Fed by betting on derivatives in the vast casino called the global capital market.

Besides, they've still got a lot of junk mortgage loans on their books and don't want to risk adding more.

Low interest rates also lower the cost of capital, which in theory should encourage companies to borrow for expansion and more hiring. But companies won't expand or hire until they have more customers. And they won't have more customers as long as most people don't have additional money to spend.

And here we come to the crux of the problem. Consumers don't have additional money. The median wage keeps dropping, adjusted for inflation. Most of the new jobs in the economy pay less than the jobs they replaced.

Corporate profits are taking a higher share of the total economy than they have since World War II, but wages are taking the smallest share since then (see graph).

CORPORATE PROFITS AS PERCENT OF GDP 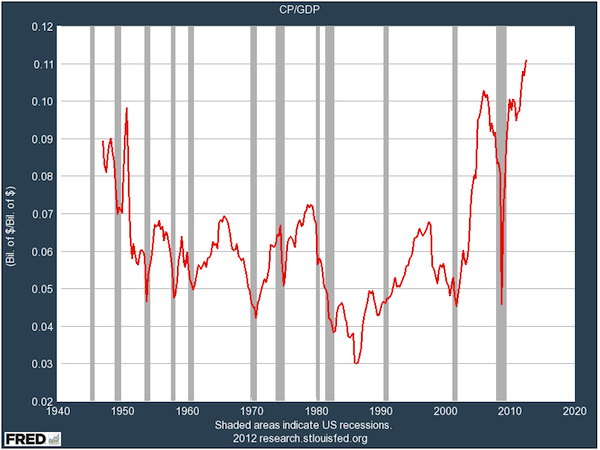 TOTAL WAGES AS PERCENT OF GDP 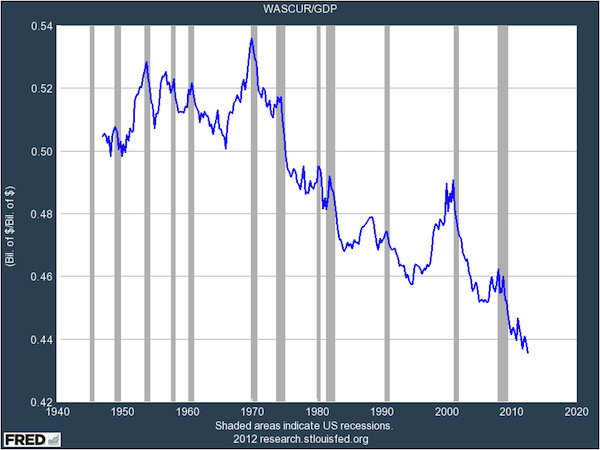 Globalization and technological changes continue to eat away at the American middle class. Yet we've done nothing to stop the erosion.

To the contrary, as in Michigan, we continue to undercut labor unions -- which for three decades after World War II had been the principal bargaining agents for the working middle class.

Moreover, instead of creating easy paths for people to gain the skills they need for higher wages, we're doing the opposite. We're firing teachers and squeezing 30 kids into K-12 classrooms, defunding job training programs and reducing support for public higher education.

Instead of encouraging profit-sharing, we're facilitating the Walmartization of America -- the lowest possible wages along with the fattest possible corporate profits. (Walmart, which directly employs almost one percent of the entire workforce at near-poverty wages, made $27 billion in operating profits last year.)

But the real job creators are America's middle class and all those aspiring to join it, whose purchases propel the economy forward. And whose declining earnings are holding the economy back.

So two cheers for Ben Bernanke and the Fed. They're doing what they can. The failure is in the rest of the government -- at both the federal and state levels -- still dominated by deficit hawks, supply-siders, and witting and unwitting lackeys of big corporations and the wealthy.