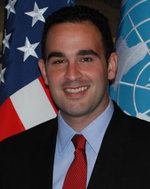 The "quarterback of the anti-legalization movement", Kevin Sabet, is bringing his road show to Oregon on the taxpayer's dime to campaign against Measure 91, our initiative to legalize marijuana. Except that he says, oh, no, heavens to Murgatroyd , "these are educational events, not political events," that just happened to be timed for the week prior to Oregon's ballot mail-out (Oregon is all vote-by-mail, so this is like standing out front of the polls on Election Day).

This, by the way, is illegal. You can't use federal tax dollars to campaign against state ballot initiatives. But golly gee, it just "never occurred" to Rick Treleaven, the organizer of the $15,000 two-day event in Madras half-paid for by federal anti-drug tax dollars, that it would be considered somehow political to bring in anti-marijuana crusaders to tour the state, also half-paid for by federal anti-drug tax dollars, just a week before Oregonians start to vote on marijuana legalization. It's just a strange coincidence.

Tigard's Connie Ramaekers, a local anti-drug crusader, said the "event fits in well with our mission" to prevent drug and alcohol use among youths. Since meth scares the hell out of every Oregon parent, they'll spend 80 minutes discussing that in Madras. Heroin and prescription drugs like Oxycontin and Vicodin are killing kids, so they'll spend 90 minutes in Madras on those. Drunk driving and binge drinking take the lives of Oregon teens every year; therefore they'll spend a whole two hours on the subject of alcohol in Madras.

But marijuana, the killer of zero Oregon teens, will be covered for 8 hours in Madras, 2 hours in Bend, Salem, Tigard, Corvallis, Eugene, Roseburg, Grants Pass, Ontario, La Grande, Hood River, and Astoria, and another 90 minutes in Clackamas. That's ten minutes short of five hours on drugs and alcohol in one city versus 31.5 hours on marijuana in thirteen cities. "We aren't there to sway voters," said the Tigard anti-drug lady. 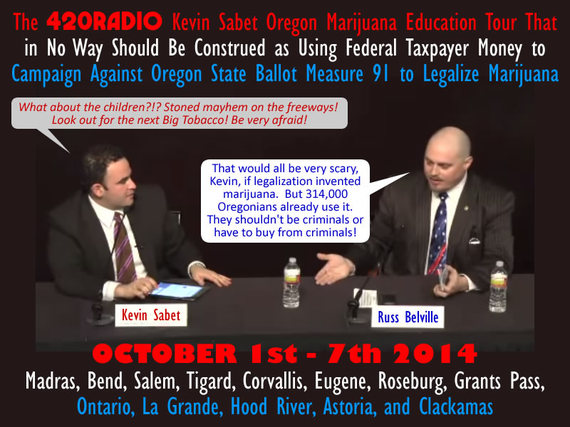 Well, we Oregonians aren't going to sit back and allow federally-funded interference in Oregon's state marijuana legalization initiative. The 420RADIO Kevin Sabet Oregon Marijuana Education Tour That in No Way Should Be Construed as Using Federal Taxpayer Money to Campaign Against State Ballot Measure 91 to Legalize Marijuana runs from October 1-7 (see http://rad-r.us/sabetor). You can listen in live at http://rad-r.us/420tunein on your smartphone or online at http://420RADIO.org as our fans infiltrate the events and ask them the tough questions about marijuana legalization.

Host of The Marijuana Agenda on YouTube, a live weekday news/talk program all about cannabis. Learn more at MJAgenda.com.