More than 1.46 million households are currently living on less than $2 a day per person in the wealthiest country in the world, more than double what it was in 1996. This shameful fact has had an especially harmful effect on children, whose numbers in these households ballooned from 1.4 million to 2.8 million. Two dollars a day is the figure the World Bank uses to measure global poverty.

For people scraping by on $2 a day, public housing, Section 8, and other HUD rental assistance programs are lifelines, very thin lifelines. For hundreds of thousands of households, these programs make the difference between having a home and being homeless. And yet both Congress and the White House are now proposing significantly raising rents in these programs. 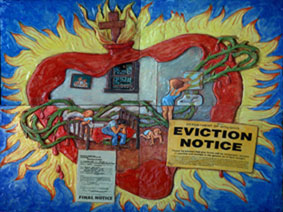 As of April 2012, tenants pay a minimum of $25 to $50 a month. The increases proposed in Rep. Biggert's (R-IL) ironically named "Affordable Housing and Self-Sufficiency Improvement Act" would raise the minimum to $69.45; the increase proposed in the President's 2013 budget would raise it to $75. For families with children who live on less than $250 a month and food stamps, such increases could mean as much as a 200 percent rise in rent. Families would have to make excruciating choices between shelter, food, and medicine.

Both Rep. Biggert and the White House argue that raising rents will increase revenues, lower the overall costs of the programs, and allow more people to receive assistance. These claims are specious at best. At worst, what they reveal is a political establishment far removed from or indifferent to the daily sufferings of those left behind by the new economic order. 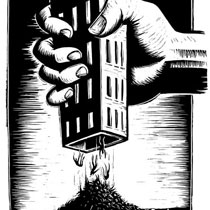 According to an analysis by the Center on Budget and Policy Priorities, the proposed hikes could expose nearly 500,000 households -- which include 700,000 children and 40,000 elderly or disabled people -- to extreme hardship and even homelessness.

Adding insult to injury, the Obama administration's 2013 budget request for public housing, Housing Choice vouchers, and Section 8 project-based rental assistance is $1.7 billion below the grossly underfunded spending bill of 2012. The automatic cuts to discretionary programs authorized by the Budget Control Act beginning in January 2013 will tighten the noose even more. Newly rising rents and continuing deep cuts signal that the nation's most affordable housing is in peril at a time when millions of people can least afford it.

Congress is beginning its budget resolution process for 2013, one that could include the President's proposal to cut HUD's 3 major housing assistance programs and to raise minimum rents. Housing advocates are calling on members of the Senate appropriations subcommittee that oversees HUD to reject the president's proposal and to renew the housing assistance programs at 2012 levels instead. Advocates are also calling on legislators to give housing authorities discretion to not raise rent on their most vulnerable tenants and to increase hardship exemptions.

This is the very least we should do. But let's not lose track of the bigger picture as we get dragged from one crisis to the next. It is not poor people who are responsible for the country's fiscal woes; it is Washington, D.C. and Wall Street. And yet it is poor people who are being targeted to suffer the most.

Over the last several decades, Republicans and Democrats alike have dismantled affordable housing programs, deregulated housing finance, and passed legislation enabling the privatization of public housing. These policies are part of a larger political agenda that ensures benefits flow to the top 10 percent while people at the bottom, especially people of color, immigrants, and the un-housed, are left with private charity, workfare programs, and the criminal justice system. 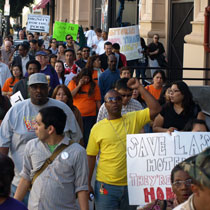 We can't put our hope in politicians and organizations that attempt to smooth out the edges of terrible legislation while people lose their homes and programs are gutted. In communities across the country, groups are joining hands to build a movement for the human right to housing. We've all seen what can happen when a community defends a homeless encampment because no other shelter exists, keeps a family from losing their home through illegal foreclosure practices, and stops an SRO building from being turned into luxury condominiums or a public housing development from being bulldozed. The organizers behind these victories are beginning to connect their local housing struggles to one another. They are also doing the difficult work of organizing across issues by linking housing to education, health care, dignified work, immigrant rights, and economic security. Together we will reclaim our communities from the greed and willful neglect emanating from the nation's capitol and create a society based on social justice.