Seed money for start-ups may be evaporating faster than California"s dwindling reservoirs, but this rocky economy's proving to be fertile ground for the seed industry. Cash-strapped consumers, scared by the specter of an empty fridge, are investing in the ultimate low-tech, high-yield start-up: the kitchen garden. The National Gardening Association estimates that some 43 million Americans are gearing up to grow at least some of their own food this spring. 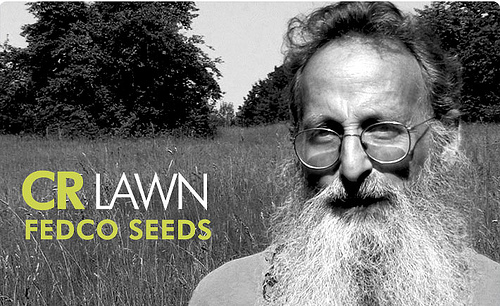 And no wonder. As Roger Doiron, founder of Maine-based Kitchen Gardeners International, has documented, a few dozen seed packets costing $130 can yield more than two thousand dollars worth of produce over the course of the growing season. "We have a fabulous opportunity," C.R. Lawn, the founder of another Maine mainstay, Fedco Seeds, told an audience at the Pennsylvania Association for Sustainable Agriculture's Farming For The Future conference last month. "The challenge is on us to come through." Lawn, an endearingly shaggy character who looks a bit like a pale Papa Smurf, rocked gently from side to side as he spoke of the challenges that his company faced following the acquisition of Fedco's largest seed supplier, Seminis, by monolithic Monsanto back in 2005.

Like many a diehard Fedco fan, I eagerly await their famous catalog each spring in anticipation of the wonderful, whimsical illustrations and witty seed descriptions sprinkled with fascinating tidbits of trivia and gratuitous political commentary. "We wish we were writing for the New Yorker," Lawn confessed wistfully.

But when I opened my 2006 Fedco catalog, anticipating a breezy excursion through the season's seed offerings, I was dismayed to find out about Fedco's dilemma. I was vaguely aware, at the time, of Monsanto's house of horrors: Agent Orange, DDT, rBST,Roundup, and so on. But I hadn't realized that they were swallowing up smaller seed companies in their relentless drive to dominate the world's food supply. In January of 2006, I wrote:

Does it matter if most of our vegetables are brought to us courtesy of Monsanto and Dupont? I'll admit I don't think about this issue a whole lot myself. But when I kicked back with a stack of seed catalogs on Sunday to find out what's new and novel in the edible landscape, I opened up the Fedco Co-op Seed Packers catalog and found a can of worms.

So when Fedco's largest seed supplier, a company called Seminis, got snapped up by Monsanto last year, Fedco was faced with a major ethical dilemma. Monsanto, king of the genetically engineered crop crowd, is anathema to the folks at Fedco, but Seminis has long provided Fedco with many of its most popular vegetable varieties, including my all-time favorite cherry tomato, a super sweet golden hybrid called Sunsugar.

Fedco, being the cooperative that it is, polled its customers: should they drop the Monsanto/Seminis seed altogether, phase it out gradually, or keep it? The majority voted to drop Monsanto like a genetically modified hot potato.

As Lawn told us at the PASA conference, Fedco has been scrambling ever since to find replacement seed varieties for the ones its customers have come to rely on. It's been a struggle, Lawn admitted, but he has no doubt they made the right decision, and sales have doubled over the past two years.

Monsanto's ongoing campaign to control our food chain's been well documented in a series of books, documentaries, and articles in recent years, but the vast majority of American consumers remain blissfully unaware of all the behind-the-scenes machinations Monsanto has employed in its quest to persecute--and, presumably, eliminate--the small, independent farmers who decline to buy Monsanto's patented, genetically modified seeds, preferring instead to grow seed varieties that have been painstakingly bred for superior flavor and texture and, in many cases, passed down through generations.

These are the heirloom varieties that have been threatened with extinction since the advent of industrial agriculture, because though they may have the best flavor, they don't ship well, or their appearance is too irregular for customers programmed to demand uniformly round tomatoes or perfect apples.

C. R. Lawn has been on the frontlines of the agri-culture wars since he founded Fedco Seeds in 1978, so the 2006 catalog was full of quotes from customers cheering his company's decision not to do business with Monsanto:

"You don't need to sell your soul for a Sunsugar...We'll survive on the sweet tastiness of the moral high ground."

But Fedco's not only surviving; it's thriving. Three years later, the 2009 catalog includes a brand new open-pollinated cherry tomato Fedco's introduced named "WOW," because "WOW! has been the first word out of everyone who has ever plopped one in his or her mouth." Sadly, I missed the boat on this reportedly remarkable new variety because, well, I was too busy attending sustainable ag conferences and the like to crack open my seed catalogs.

I'm sorry I won't be harvesting any "WOWs" this year, but thankful I had the opportunity to hear the iconic, ironic C. R. Lawn speak. With the impending publication of Robyn O'Brien's The Unhealthy Truth: How Our Food is Making us Sick -- And What We Can Do About It, and the June release of the documentary Food, Inc., mainstream America's about to get a wake-up call on just how asleep at the wheel our government's been in allowing Monsanto to monopolize our country's crops. Here's to C. R. Lawn and his colleagues at Fedco for weathering the Seminis/Monsanto storm and emerging triumphant. Thanks to these savers of seeds, our nation's rich agricultural heritage lives on.