WASHINGTON -- A group of more than 100 federal contract workers and demonstrators marched outside the Smithsonian National Air and Space Museum on the National Mall Thursday, protesting the low pay and lack of benefits that come with many food and retail jobs inside federal buildings.

Workers who took part in the one-day strike said they don't earn enough money to support their families, and they urged President Barack Obama to sign an executive order guaranteeing a living wage for workers whose jobs fall under federal concessions contracts. The workers aren't employed directly by the federal government, but work for private companies that benefit from federal contracts.

"We can't survive on $8.25," the workers chanted as they marched toward the museum, referencing the minimum wage in the District of Columbia.

A Smithsonian spokeswoman said its restaurants were staffed and open all day, and on Thursday the institution tweeted, "FYI, there was no strike or walk-out by food service workers at the Smithsonian today." But the union-backed group behind the demonstrations, Good Jobs Nation, said roughly fifty workers on schedule to work at restaurants in Smithsonian museums joined the one-day strike.

Policy experts at the protest emphasized that wage increases were necessary for workers toiling at or near the minimum wage in the city. The low-wage workers who were demonstrating -- many of whom work restaurant and retail jobs inside federal buildings -- were joined by representatives from the Economic Policy Institute, a left-leaning think tank, and the D.C. Fiscal Policy Center, a nonprofit tax research group.

"The cost of living in D.C. is high and rising, and the wages are low and stagnant," Ed Lazere, a representative from the D.C. Fiscal Policy Institute, said.

Jonathan Ross and Ana Hernandez, who were participating in the protest, spoke of their struggles to make ends meet on their current wages.

"President Obama, father to father, I am pleading with you to sign the executive order," Ross, a single father who currently shares a boarding house room with his daughter, said. "This is real life out here, and I am more than just a number on a spreadsheet."

Hernandez spoke tearfully in Spanish of her life as a single mother of five. After nine years working at the McDonald's inside the Air and Space Museum, Hernandez still makes around the minimum wage, she said through a translator.

"I really struggle to pay bills, to buy clothes for my kids, and to put food on the table," she said. "We work hard. We came here -- in some cases from our countries -- to earn a better living, and that's not the case. I'm here to ask the president to do something about it."

Though workers came from a variety of jobs, their sentiments were the same: Low-wage earners simply cannot afford the cost of living in one of the nation's most expensive cities.

Low-wage workers have been staging protests all over the country in recent months, starting with a strike by Walmart workers on Black Friday last year. Thursday's strike was part of a larger, union-backed campaign, called Good Jobs Nation, to highlight the meager earnings of many people who work on federal properties.

The first strike in Washington, D.C., took place in May, when about 150 workers went on strike at Union Station. Later, in July, contract workers took part in a strike at the Ronald Reagan Building. One of those workers, an undocumented immigrant, accused his employer of wage theft and was later detained by federal officials.

Darryl Proctor took part in Thursday's protest, though he doesn't work at a federal building. He works a concessions job at Nationals Stadium, and he said he's been staying in a transitional homeless shelter in northeast D.C. while he searches for affordable housing. He said that on his salary, it's all but impossible to afford basic necessities.

"It's not enough money for us to live out here in D.C," Proctor said. "I'm supporting [the strike] because we all need to live comfortably. It's hard struggling every day."

The concept of a living wage in D.C. has made national headlines this week, as city lawmakers passed a bill requiring big-box retailers like Walmart to pay their workers 50 percent over the city’s minimum wage, or $12.50 an hour. Walmart has loudly protested this motion, saying it may consider pulling plans for three stores in the capital. Last fiscal year, Walmart reported a net income of $17 billion.

The demonstration outside the Smithsonian blocked lanes on Independence Avenue and attracted the attention of tourists and federal employees, who observed from office buildings across the street. Strikers continued to march to the Smithsonian Castle to deliver a petition, but police closed the gates of the Smithsonian's headquarters for safety concerns, according to a security guard.

Strikers dragged a mattress into the middle of the street as people dressed as Uncle Sam, Walmart and Ronald McDonald cuddled in bed together with a large fake check for $1 million, made out to "Federal Contractor CEO."

The crowd booed as Inocencio Quinones, a protester who was dressed as Uncle Sam complete with a white, curly wig, handed a member of the crowd a check for $8.25. It was paid to the order of "Federally Contracted Worker."

Michelle Hamilton, dressed as Walmart by sticking the company's smiley face logo to her hat, told HuffPost that a living wage would increase the safety of the community.

"This would keep a lot of crime off the street and let a lot of children pay for college and help themselves get out of debt from student loans," she said.

According to a report from EPI, Washington, D.C., is the most expensive city to raise a single child in the country, while only three other metropolitan centers surpass the capital as more expensive to raise two children. By the institute's calculations, a couple living in D.C. with two children would need an annual income of $88,615 to be considered economically secure.

The median family income in D.C. is $61,835, according to the Census Bureau -- though income is far lower in some of the more economically depressed areas of the city. A 2010 report by the Urban Institute found that Ward 8, an underserved pocket of the capital, had a median income of $22,410.

"The real costs for families to live modest, economically secure lives are much higher than traditional measures suggest -- including the federal poverty measure," EPI researcher Doug Hall told the strikers.

Passing tourists were confused by the strike on Thursday, but most seemed unfazed. Grant Fri said he was visiting from southern California. He told HuffPost he didn't think the strike would have much of an impact on his day as he visited the Smithsonian museums.

Correction: This story originally misspelled Jonathan Ross' name. The story has also been updated with comments from the Smithsonian and the union-back group organizing the protest. 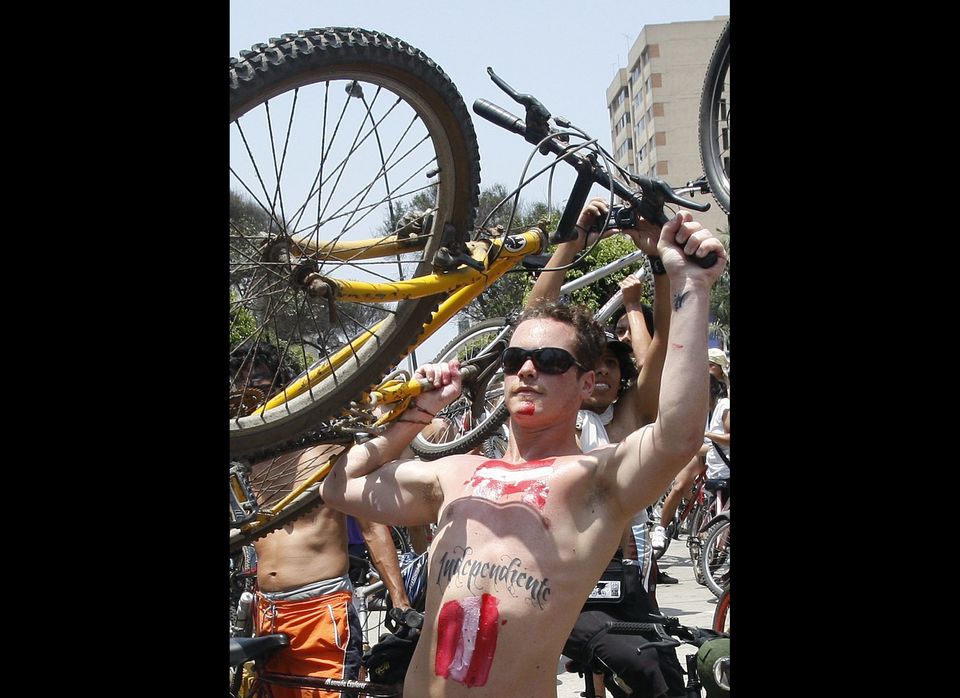