With the August 2 deadline for increasing the debt ceiling fast approaching, the beltway media is quick to praise the "courage" of politicians who propose cutting Medicare, whether it's Paul Ryan for proposing to turn Medicare into a voucher program, or President Obama for proposing more modest cuts like increasing the eligibility age from 65 to 67 or "means testing" benefits based on income. But there's nothing courageous about putting more of the burden of medical care onto the backs of seniors who have spent a lifetime paying Medicare taxes in order to guarantee their medical security when they get older.

If our leaders want to show real political courage when it comes to the federal debt, they should try this statement on for size:

If America financed healthcare the way other rich capitalist countries do, there would be no federal deficit -- even without other spending cuts or tax increases -- and America could still afford to provide healthcare to all its citizens.

As the chart below shows, the CBO estimates that if American healthcare costs continue to grow at current rates (yellow Baseline), deficits as a percentage of GDP will soar to levels so high that no politically acceptable combination of budget cuts and tax increases will be able to control them. 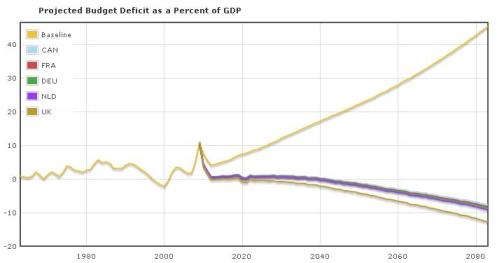 What's the difference between America and the rest of the developed capitalist world when it comes to healthcare costs? Only America has a system driven by for-profit health insurance. Every other capitalist country has either a form of government-run single payer health insurance (in effect "Medicare for All") or a highly regulated utility.

Approximately 30% of every dollar spent in the US on private health insurance goes to administrative costs, marketing, executive salaries, and profits (as opposed to 2%-3% to administer Medicare) wasting hundreds of billions a year. Moreover, under a system of multiple payers, it's impossible to negotiate substantially lower costs from healthcare providers. In contrast, other advanced countries have a government-administered monopsony (the opposite of a monopoly under which there's one buyer and multiple sellers) so the government can negotiate cost savings, as well as ensure that providers focus their resources where they're needed (e.g on primary care instead of on more profitable specialties.) That's the biggest reason why other advanced countries spend half as much per capita on healthcare and get better results.

So there's nothing politically courageous about proposing to change Medicare from a system of guaranteed care for all elderly Americans to a voucher system in which 65-year-olds would initially have to contribute over $6,000 a year out-of-pocket to private health insurance companies in the first year of the program, as Paul Ryan and House Republicans are advocating. Republicare doesn't lower the per capita cost of American healthcare or extend healthcare to the uninsured -- It simply shifts the cost from the government onto the backs of America's oldest and most vulnerable citizens.

Though slightly less draconian, there's nothing politically courageous about the mainstream Democratic approach either. The Affordable Health Care Act -- "Obamacare" -- subsidizes the private insurance industry while offering little but pilot programs to lower costs. Obama's recent proposals to increase the Medicare eligibility age from 65 to 67 or to "means test" Medicare -- which starts to transform Medicare from a social insurance program to a welfare program -- begins to dismantle Medicare as we know it brick-by-brick, rather than in one fell swoop like the Ryan plan.

Although none of these proposals may be enacted right away, the danger is that if medical inflation continues to escalate the cost of Medicare, Medicare will eat up more and more of the federal budget and a few years down the line, there may be little choice but to either significantly cut Medicare benefits or transform it into a voucher system. Reluctant as I am to admit it, I must give a certain amount of credit to Paul Ryan for telling the inconvenient truth that given the rising cost curve, in the long-term Medicare as we now know it may be not financially sustainable.

Republicans and conservatives have no problem making maximalist right-wing proposals -- like opposing even one penny in tax increases for the rich, proposing a balanced budget Constitutional amendment, or supporting Ryan's plan to turn Medicare into an underfunded voucher program -- even though they know that their proposals will not be enacted in the short-run. But by loudly trumpeting them, they move the political center to the right. Democrats like Obama respond by moving in a rightward direction, showing a willingness in principle to sharply curtail domestic social programs in return for relatively small tax increases in the form of closing loopholes, or proposing to start the process of reducing Medicare, Medicaid and Social Security with an initial series of relatively small cuts that opens the floodgates to bigger cuts.

To move the center back to the left, Democrats and progressives have to "go long," too. And "going long" doesn't mean advocating a "grand bargain" like that proposed by the chairmen of Obama's Deficit Commission which focuses on reducing the deficit instead of creating jobs, advocates 2/3 (or more) in spending cuts to 1/3 (or less) in revenue increases, and begins to cut the key social safety net programs like Social Security, Medicare and Medicaid.

"Going long" for progressives and Democrats should mean making audacious proposals which shift power back from the wealthy to the middle class like meaningful increases in taxes for the wealthy and corporations, serious government-funded programs to create jobs, a more rapid end to the war in Afghanistan, which is draining the national treasury without making America safer, and major cuts to the American defense budget, which equals the defense budget of the rest of the world combined. These type of proposals might not pass this Congress, or even the next one. But they begin to redefine the nature of the political debate and move at back to the left from its dramatic rightward shift in recent years.

When it comes to health care, "going long" means being truthful with the American people and telling them that to protect Medicare in the long-term while controlling the federal debt, America will have to join the rest of the civilized world and enact Medicare For All.