WASHINGTON -- Budget cuts and forced furloughs have taken a toll on federal workers, with job satisfaction at a record low in a new government-wide survey.

"We are dismantling the capability of our government by the way it's being managed, and the people in government are giving that message back. ... It should be really worrisome to anyone who cares about our country," said Max Stier, president and CEO of the nonprofit Partnership for Public Service, which produced a report on the survey.

The Office of Personnel Management surveys workers across the government annually about their satisfaction at work. This year, nearly 400,000 people participated from April through June, just as sequestration's furloughs were hitting many workers.

Federal workforce satisfaction has dropped for the third straight year, to the lowest level since the rankings were first published in 2003. Meanwhile, employee satisfaction in the private sector is up. From the report: 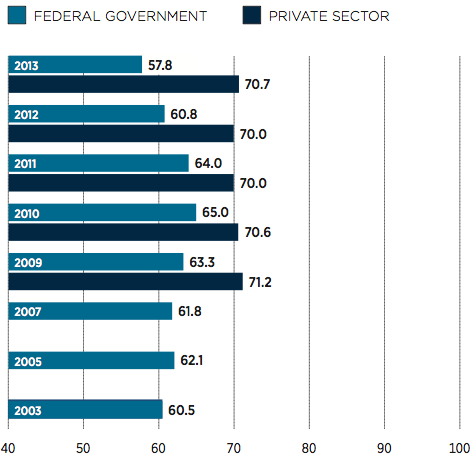 The report doesn't even tell the whole story of what federal workers faced in 2013, in part because its figures come from before the 16-day federal government shutdown in October. During that time, 800,000 employees -- many of whom had already lost part of their salaries due to earlier furloughs -- were temporarily forced out of work and left unsure of whether they would receive back pay. (Congress did eventually authorize compensation for them.)

Had the survey results included the shutdown, Stier said, the picture would likely be even more discouraging.

"I think that if the survey were done today, I have no doubt the results would be lower," he said. "We continue to dig a deeper and deeper hole, and the shutdown was devastating in all kinds of ways. Most fundamentally because the workforce that we have in government is a mission-oriented workforce. They want to do their jobs. They're there because they want to make a difference for the public. The most damaging thing you can do for someone who's mission-oriented is tie their hands behind their back and say, 'You can't help.'"

And retaining and recruiting talented employees is becoming a more worrisome problem for the government. During the shutdown, federal workers told The Huffington Post that they were looking for jobs in the private sector because of the uncertainty surrounding their government positions.

"I had never considered leaving federal service," Leah Phifer, a civil servant in the Department of Homeland Security in Minnesota said at the time. "But I have student loans to pay back. I want to buy a house. I want a life that doesn't include biannual panic attacks over arbitrarily losing my job."

In a statement accompanying the report, OPM Director Katherine Archuleta warned of possible consequences should lawmakers in Congress continue to find themselves unable to cooperate.

"The survey results serve as an important warning about the long-term consequences of the sequestration and budget uncertainty," she said. "Without a more predictable and responsible budget situation, we risk losing our most talented employees, as well as hurting our ability to recruit top talent for the future."

According to the Best Places to Work ranking, quality of leadership is the most important issue affecting government employee satisfaction, followed by the connection between employees' skills and their agency's mission. The third most important consideration is pay, which wasn't ranked as highly before 2010 and the imposition of a federal pay freeze.

Among federal agencies, NASA, the Federal Deposit Insurance Corporation and the Surface Transportation Board were all rated the best places to work. The Environmental Protection Agency, Department of Housing and Urban Development, Office of Management and Budget and Defense Nuclear Facilities Safety Board all saw the biggest decrease in employee satisfaction and commitment.

During the government shutdown, President Barack Obama sent a letter to federal workers and apologized for their being treated like a "punching bag" in the current political climate, where civil servants are often portrayed as spoiled compared to private-sector workers.

"None of this is fair to you. And should it continue, it will make it more difficult to keep attracting the kind of driven, patriotic, idealistic Americans to public service that our citizens deserve and that our system of self-government demands," Obama wrote.

But under the most recent federal budget deal worked out between Sen. Patty Murray (D-Wash.) and Rep. Paul Ryan (R-Wis.), federal workers will take another hit, with new employees required to contribute more money toward their pensions.

Even the Best Places to Work ranking wasn't spared the pain of the shutdown. Stier was supposed to receive the OPM survey results in early October, but he said the data ended up being delayed about three or four weeks because the government was closed.