WASHINGTON -- When it comes to polls about the government shutdown, the question of "who is to blame" seems to capture the imagination of partisans more than any other. Yet that question may be the least reliable gauge of public opinion about the ongoing crisis.

A new Pew Research Center survey, released on Tuesday, finds that more Americans blame Republicans (46 percent) than the Obama administration (37 percent) for "the deadlock in Washington over the government shutdown and the debt limit." The net disadvantage for the GOP was roughly the same on a Pew Research survey conducted a week earlier, which found Republicans as more to blame by a 38 percent to 30 percent margin.

These results differed from an NBC/Wall Street Journal poll, released last week, that showed the public blaming Republicans by a wider, 22-point margin (53 percent to 31 percent).

And they differed further from a recent HuffPost/YouGov poll, which yields yet another result partly because it allowed respondents to "check all that apply" from a list of three choices: President Barack Obama, Republicans in Congress, and Democrats in Congress. Initially, slightly more checked only Republicans (38 percent) than checked only Obama, only Democrats or both (34 percent). After a follow-up probed further for the most responsible party, Americans split evenly (43 percent each) on whether Republicans or Democrats were to blame. 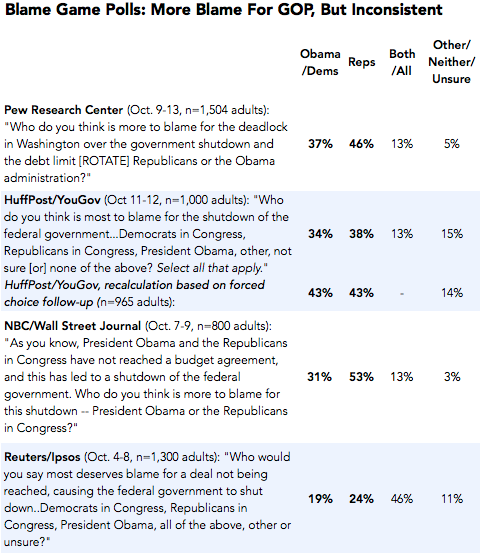 What's the story here? The slight differences in question wording and format play a role, to be sure, but the bigger problem may be that many Americans are hesitant to assign all responsibility for the shutdown to one side or another. As evidence, consider the Reuters/Ipsos poll, which found that nearly half the respondents (46 percent) opted for "all of the above" when it was offered as a choice. The apparent inconsistency among the surveys may be the result of pushing people to assign blame when many see plenty of blame to go around.

On the other hand, two recent polls show that if given the chance to individually rate how the main parties involved are handling the shutdown, majorities of Americans disapprove of everyone involved, but their disapproval of Republicans is highest. 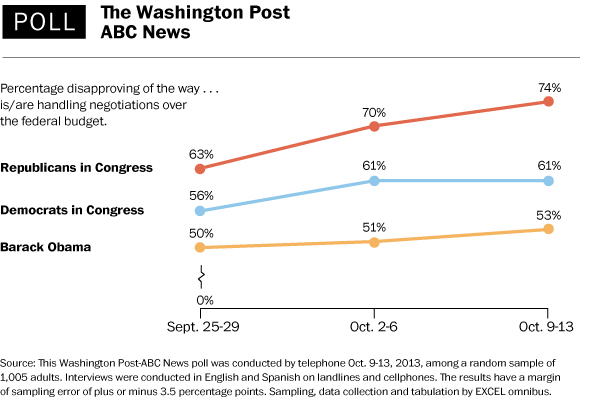 Surveys have been less consistent on how differing levels of anger with each party over its handling of the shutdown might impact the image of the party overall.

While two surveys released since the start of the shutdown, conducted by NBC News/Wall Street Journal and by Gallup, showed record low favorable ratings for the Republican Party overall, the Pew poll released Tuesday had less dramatic findings. The GOP's 38 percent favorable rating in the latter poll was lower than that of the Democratic Party or Obama (both at 47 percent), but far from a record low.

Pew notes that in its own poll, "Approval ratings for President Obama (43% approve), Democratic congressional leaders (31%) and GOP leaders (20%) all are at or near all-time lows, yet are not substantially more negative than they were in early September, a month before the shutdown started."

Regardless of their impact on the parties' overall ratings, though, two threads of opinion run clearly through polls on the shutdown: First, Americans are angry at the government generally and everyone involved in the shutdown negotiations. Second, despite blaming many for the crisis, Americans are particularly angry at Republicans.