Just because the government doesn't define you as poor, doesn't mean you have enough money to live.

The federal poverty line for a family of four was $23,283 last year, nearly one-quarter of what it takes to live in New York City and slightly more than one-third of what it takes to live in St. Louis, according a family budget calculator from the Economic Policy Institute, a left-leaning think tank. In fact, EPI found that in 615 cities across the country it takes a total income at least twice the federal poverty line for any type of family with three children or fewer to afford basic expenses.

“I don’t think anyone gets any sense of economic security from living at that line,” Elise Gould, one of the paper’s authors and the director of health policy research at EPI, told The Huffington Post. “It’s a measure of absolute deprivation.”

(Click over to EPI's budget calculator to determine how much it costs for a family to live in your city.)

In determining the income required for a family to get by, EPI’s budget calculator considers the regional cost of housing, child care, health care, transportation and other basic needs. It illustrates the limits of the Census' official poverty measure, which is determined using the cost of certain food staples nationally and adjusts with inflation.

The government launched an alternative measure of poverty in recent years, which includes costs like clothing, housing and the income received through tax credits and government benefits. Still, it doesn’t take into account as many variables as EPI’s measure and isn’t as geographically specific.

In order to be able to afford to live anywhere in the country, workers have to be making more than the federal minimum wage of $7.25 an hour, according to EPI. There’s nowhere in America where two parents earning the federal minimum wage, which amounts to about $30,000 per year collectively, can make enough to support a family of three or four, the analysis found.

To put that into perspective, it takes a combined income of $44,617 for a two parent, one child household to cover basic needs in Simpson County, Mississippi, the region with the lowest cost of living for that type of family, according to EPI’s calculator.

That measure doesn’t account for the fact that some states have a minimum wage that's higher than $7.25. Still, about 3.6 million workers earned the federal minimum wage or below last year, according to the Bureau of Labor Statistics.

Raising the minimum wage would help families at least get to EPI’s level of basic economic security, but as Gould notes, the measure still only allows enough money for a family living very basically and essentially paycheck-to-paycheck.

“None of those things which would put people more solidly in the middle class are in our budget,” she said. “This is definitely a modest budget even though it is so much higher the federal poverty line.”

Check out this chart from EPI, which shows how much money it takes for a family of four to live in various cities: 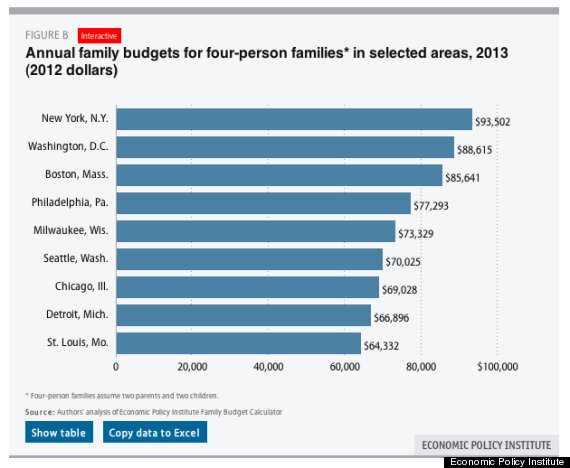