The Federal Reserve Board We-Hate-Math Committee announced the true purpose behind QE.

Do derivatives confuse you? Do you hate bond math? We feel the same way! So we simplified your life with headache free QE math. Compound rates, equivalent rates, production functions: who needs old math?

You want to invest $100,000 for one year. A too-big-to-fail bank offers an interest rate of 10% per annum with quarterly compounding which reflects the bank's credit risk without taxpayer support for the financial system.

What is the equivalent rate with continuous compounding? What is the value of your investment after one year rounded to the nearest dollar?

You may be annoyed that we simplified the calculation by rounding to the nearest dollar; we agree, that was oversimplification, but we love simplicity! (And that's chump change compared to how much you are getting ripped off in our new system.) So with our new math system, there is no need for rounding! In fact, there is no need to ever calculate equivalent yields or compound rates again!

You want to invest $100,000 for one year. A too-big-to-fail bank quotes the taxpayer subsidized interest rate of zero percent per annum with quarterly compounding. Notice that zero rates make compounding irrelevant!

What is the equivalent rate with continuous compounding? What is the value of your investment after one year?

Your equivalent rate is zero, and e^0 = 1, so your future value factor is 1. What could be easier?

The future value of your investment is $100,000. Unadjusted for inflation, of course!

We did away with inflation calculations, too. It is easy if you do not count food, energy, or healthcare.

You remember the production function:

This represents factory output as a function of capital (K) and labor (L). Let's solve for the partial derivative of ƒ(K,L) with respect to L.

This equation tells us how much production (in the form of factory output) will change when we increase labor and keep capital fixed.

By keeping interest rates at zero, we encourage companies to buy back their own stock and engage in acquisitions instead of using that money for capital spending. The stock market loves it! 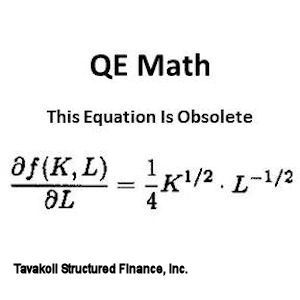 We know that with no net increase in capital spending, you can add more labor, but on the margin, it will be less productive, so we've eliminated creation of net new full time production jobs!

Also, by keeping interest rates zero, investors in "safe" investments get zero interest, so they are reluctant to spend. There is no need for increased production!

We can eliminate this old math production function entirely!

The Genius of the New Math

You may ask when we will raise rates? With real productivity low, why would we raise rates? That's our story, anyway. Besides, European sovereign debt now trades at negative yields, so in comparison, zero is a windfall for investors! We don't need to take a step forward when everyone else is willing to take a step back. The new math is safe for the time being.

Bankers and financiers will continue to siphon cash from the productive economy; they will be able to buy more goods and services than savers, taxpayers and voters who could not be bothered to do the math.

Endnote: This is a work of satire, and this is not a press release from the Federal Reserve Bank Board We-Hate-Math Committee. Originally published at The Financial Report.