* Questions over whether Fed did enough over Libor concerns

* May have known as early as August 2007 about flaws

July 10 (Reuters) - The Federal Reserve Bank of New York may have known as early as August 2007 that the setting of global benchmark interest rates was flawed. Following an inquiry with British banking group Barclays Plc in the spring of 2008, it shared proposals for reform of the system with British authorities.

The role of the Fed is likely to raise questions about whether it and other authorities took enough action to address concerns they had about the way Libor rates were set, or whether their struggle to keep the banking system afloat through the financial crisis meant the issue took a backseat.

A New York Fed spokesperson said in a statement that "in the context of our market monitoring following the onset of the financial crisis in late 2007, involving thousands of calls and emails with market participants over a period of many months, we received occasional anecdotal reports from Barclays of problems with Libor.

"In the spring of 2008, following the failure of Bear Stearns and shortly before the first media report on the subject, we made further inquiry of Barclays as to how Libor submissions were being conducted. We subsequently shared our analysis and suggestions for reform of Libor with the relevant authorities in the UK."

The Fed statement did not provide the precise timing of the communication with the British authorities. Bear Stearns collapsed in early March 2008 and was then acquired by JPMorgan.

Meanwhile, legislators on Capitol Hill have signaled they are interested in learning more about what Fed officials knew with regards to allegations of Libor manipulation.

On July 9, Rep. Randy Neugebauer, chairman of a subcommittee of the House Financial Services Committee, sent a letter to the New York Fed asking for transcripts of any "communications with Barclays regarding the setting of interbank offered rates from August 2007 to November 2008."

In the letter, a copy of which was reviewed by Reuters, the Texas Republican asked New York Fed President William Dudley to provide the transcripts by Friday.

Tim Johnson, who chairs the Senate Banking Committee, said on Tuesday he was concerned by the allegations of the potential "widespread manipulation" of Libor and had directed his staff to schedule briefings on the issue.

Barclays last month agreed to pay $453 million to British and U.S. authorities to settle allegations that it manipulated Libor, a series of rates set daily by a group of international banks in London across various currencies.

The rates are an integral part of the world financial system and have an impact on borrowing costs for many people and companies as they are used to price some $550 trillion in loans, securities and derivatives.

By manipulating Libor, banks could have made profits or avoided losses by wagering on the direction of interest rates. During the enormous liquidity problems in the financial crisis they could, by reporting lower than actual borrowing costs, have signaled that they were in better financial health than they really were.

So far, the scandal has been more of a British affair, prompting the resignation of Barclays top three executives, condemnation from the British government amid a public outcry, and questions about the lack of oversight from British regulators.

The Bank of England's Deputy Governor Paul Tucker on Monday even had to deny suggestions that government ministers had pressured him to encourage banks to manipulate Libor.

But the deepening investigation by regulators in Britain, the United States, and other countries is expected to uncover problems well beyond Barclays and British banks.

More than a dozen banks are being investigated for their roles in setting Libor, including Citigroup, JPMorgan Chase & Co, Deutsche Bank, HSBC Holdings Plc , UBS and Royal Bank of Scotland..

Regulators, including the New York Fed, had a responsibility "to force greater integrity and cooperation," and it had clearly reviewed the situation and had the resources to investigate, said Andrew Verstein, an associate research scholar at Yale University, who has written about Libor. "Obviously they considered this to be within their orbit."

Many of the requests for improper Libor submissions came from traders in New York.

As one of the world's most powerful regulators, the New York Fed has the power to "jawbone" banks to force them to make tough decisions, said Oliver Ireland, former associate general counsel at the Federal Reserve in Washington and now a lawyer at Washington law firm Morrison & Foerster.

Still, he said by the autumn of 2008, the New York Fed's focus was locked on the impact of the meltdown of Lehman Brothers and AIG as it sought to prevent a global economic disaster.

Barclays said in documents released last Tuesday that it first contacted Fed officials to discuss Libor on Aug. 28, 2007, at a time when credit problems arising from the U.S. housing bust were beginning to mount. It communicated with the Fed twice that day.

Between then and October 2008, it communicated another 10 times with the U.S. central bank about Libor submissions, including Libor-related problems during the financial crisis, according to the documents.

In its document listing those meetings as well as ones with British authorities, Barclays said: "We believe that this chronology shows clearly that our people repeatedly raised with regulators concerns arising from the impact of the credit crisis on LIBOR setting over an extended period."

As a bank doing business in the United States, Barclays U.S. operations would have come under the Fed's purview. This would have been even more the case after it acquired the investment banking and trading operations of the bankrupt Lehman Brothers in September 2008.

Officials with the New York Fed talked to authorities in Britain about problems with the calculation of Libor and also heard from market participants about whether an alternative could be found for Libor, people familiar with the situation said.

In early 2008, questions about whether Libor reflected banks' true borrowing costs became more public. The Bank for International Settlements published a paper raising the issue in March of that year, and an April 16 story in the Wall Street Journal cast doubts on whether banks were reporting accurate rates. Barclays said it met with Fed officials twice in March-April 2008 to discuss Libor.

According to the calendar of then New York Fed President, Timothy Geithner, who is now U.S. Treasury Secretary, it even held a "Fixing LIBOR" meeting between 2:30-3:00 pm on April 28, 2008. At least eight senior Fed staffers were invited.

It is unclear precisely what was discussed at this meeting or who attended. Among those invited, along with Geithner, was William Dudley, who was then head of the Markets Group at the New York Fed and who succeeded Geithner as its president in January 2009. Also invited was James McAndrews, a Fed economist who published a report three months later that questioned whether Libor was manipulated.

"A problem of focusing on the Libor is that the banks in the Libor panel are suspected to under-report the borrowing costs during the period of recent credit crunch," said that report in July 2008 that examined whether a government liquidity facility was helping ease pressure in the interbank lending market.

When asked for comment, McAndrews directed questions to a New York Fed spokeswoman. Dudley could not be immediately reached for comment.

To be sure, the Fed's reports have sometimes been inconclusive. One from last month - only shortly before the Barclays settlement was announced - found that "while misreporting by Libor-panel banks would cause Libor to deviate from other funding measures, our results do not indicate whether or not such misreporting may have occurred."

However, a 2010 draft of a related paper had said that banks appeared to be paying higher rates to borrow from other banks during the financial crisis compared with the levels they reported.

One step the New York Fed could have taken in 2008 when questions initially were raised was to find a way to get its staff embedded in the Libor calculation process, Yale's Verstein said.

There, they could use the Fedwire Funds Service - an electronic system through which banks settle interbank loans between one another - as a backstop to measure whether banks were accurately reporting borrowing costs. Then after the financial crisis had passed, regulators could have helped "urge on a newer and better system," he said.

The New York Fed was not part of the Barclays settlement, which was the first major resolution in the Libor probe.

The U.S. Commodity Futures Trading Commission, the U.S. Department of Justice, and the Financial Services Authority in Britain, settled with Barclays.

The scandal has thrown into sharp relief a potential regulatory gap: No single regulator appears to have had ultimate responsibility for making sure rates banks submitted were honest.

On Monday, the Bank of England's Tucker called the issue of banks improperly submitting rates a "cesspit."

In documents released with the Barclays settlement, the CFTC said Barclays traders on a New York derivatives desk asked another Barclays desk in London to manipulate Libor to benefit trading positions.

"For Monday we are very long 3m (three-month) cash here in NY and would like the setting to be set as low as possible," a New York trader emailed in 2006 to a person responsible for setting Barclays rates.

Darrell Duffie, a Stanford University finance professor who has followed the Libor issue for several years, said that he believed regulators were "on the case reasonably quickly" after questions were raised in 2008.

"It appears that some regulators, at least at the New York Fed, indeed knew there was a problem at that time. New York Fed staff have subsequently presented some very good research on the likely level of distortions in Libor reporting," Duffie said. "I am surprised, however, that the various regulators in the U.S. and UK took this long to identify and act on the misbehavior."

Below are some of the emails between Barclays traders that were released to the public: 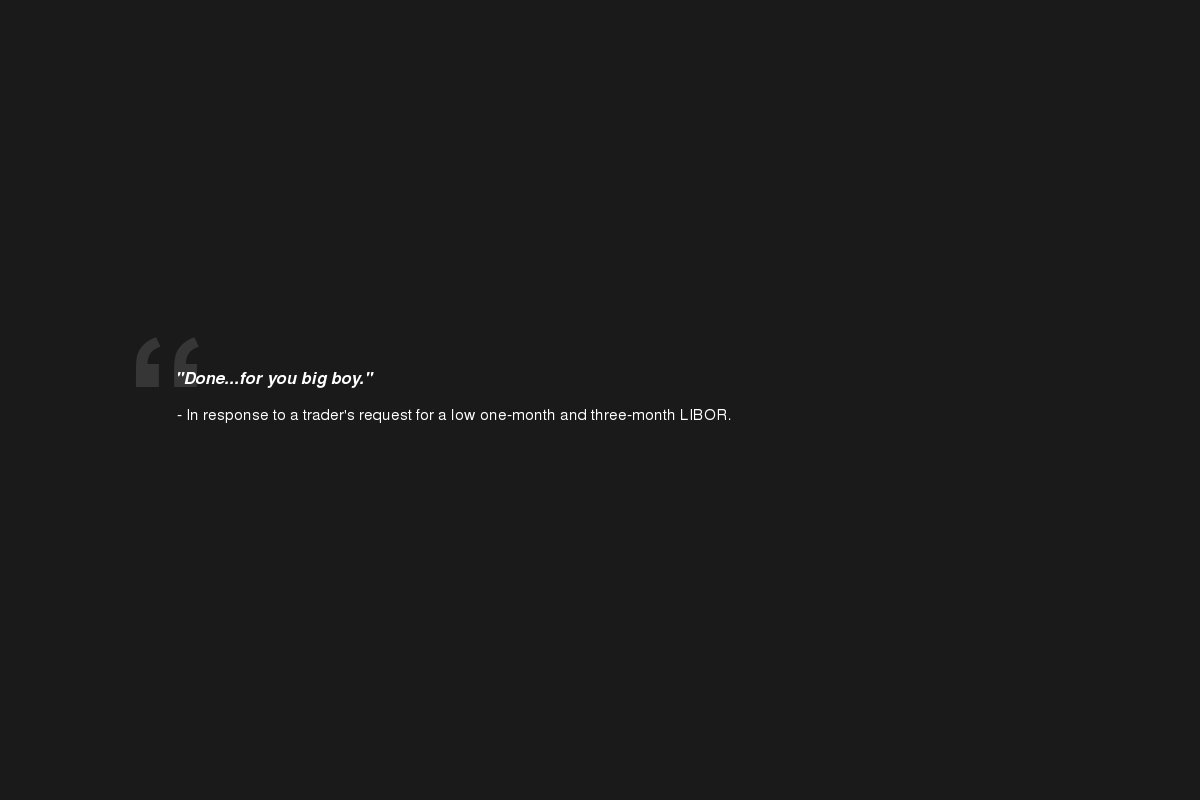