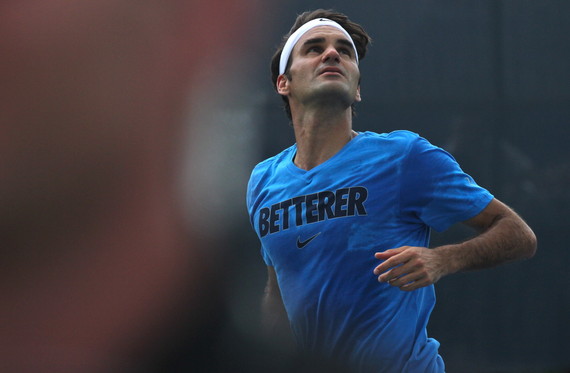 David Packman respectfully invokes the spirit of famed writer David Foster Wallace to pay homage to Roger Federer as he reaches 1000 wins on the ATP Tour.

Driving back home along the coast last weekend, my journey was accompanied by the dulcet tones of a sports radio broadcaster. He was discussing the fact that "Roger" was in action this very evening, playing in the Brisbane final against Milos Raonic in a bid to notch up his 1000th win at ATP level.

Roger versus Raonic. It made me wonder how many other current sporting greats are recognizable -- and openly discussed -- by only their first names. It's certainly a select few. It's been that way in Australia with Roger as long as I can remember. We're a colloquial bunch, but nonetheless, I'd like to imagine this is a global phenomenon.

As it turned out, Roger accounted for the big Canadian -- one of the young brigade trying to prematurely oust the Swiss maestro from his throne -- in three sets that night and subsequently took his place among the very greatest legends to have won 1000 matches since the Open era began in 1968, namely Jimmy Connors and Ivan Lendl.

Watching his run to the title last week, it looked like the Federer of old, sweeping his opponents aside, including win number 999, where he nonchalantly eased past Grigor Dimitrov -- next in line for the mantle of "he of the beautiful style". It was very fitting.

In a discussion of Federer's most recent milestone, one could list his achievements -- but they are too many to mention -- and in fact, there is really nothing more that can be said about the man than already has. This is simply a story about truth and beauty.

The Federer technique is homage to the history of the game. It's classic and sublime -- stunningly beautiful. Remarkably, it has stood the test of time. We've been blessed to witness the ultimate in sport -- the contest between beauty and the beast -- as the rise of the aggressive two-fisters and the Goliaths with the bludgeoning serves have attempted to topple him. It's been a battlefield but at 33-years-old, he has largely withstood the barrage, currently still second in the world and looking this year as likely a threat to the top spot as anyone.

He said on Monday with a wry smile that he was happy to hang around for a few more years to let the younger guys get the opportunity to play against him and "beat up on him a bit" -- his skill is only matched by his humble respect for the game and his place in it.

With that in mind, I can think of no better opportunity than to revisit the work of arguably Federer's greatest admirer and one the most talented writers of his generation, David Foster Wallace.

Author Zadie Smith once described Foster Wallace as "a visionary, a craftsmen...he's in a different time-space continuum from the rest of us." I think the same can be said of his muse.

The world lost Foster Wallace to suicide at the age of 46 but so much remains -- including his spectacular essay "Federer as religious experience". For fans of either man, I urge you to read it. Here is a sample:

A top athlete's beauty is next to impossible to describe directly. Or to evoke. Federer's forehand is a great liquid whip, his backhand a one-hander that he can drive flat, load with topspin, or slice -- the slice with such snap that the ball turns shapes in the air and skids on the grass to maybe ankle height. His serve has world-class pace and a degree of placement and variety no one else comes close to; the service motion is lithe and uneccentric, distinctive (on TV) only in a certain eel-like all-body snap at the moment of impact. His anticipation and court sense are otherworldly, and his footwork is the best in the game -- as a child, he was also a soccer prodigy. All this is true, and yet none of it really explains anything or evokes the experience of watching this man play. Of witnessing, firsthand, the beauty and genius of his game. You more have to come at the aesthetic stuff obliquely, to talk around it, or -- as Aquinas did with his own ineffable subject -- to try to define it in terms of what it is not.

Legend has it Foster Wallace only spent 20 minutes with Federer to produce this epic piece -- often referred to as one of sports journalism's most famous write-arounds.

My mind wanders to what Foster Wallace would say of Federer today, over eight years since his masterpiece.

I'd suggest he'd simply comment that nothing much has changed. Federer continues to captivate crowds with his otherworldly skill -- his lean physique even remains -- perhaps it's just that his experience has now led to an uncanny wisdom. An innate aspect to Federer that has somehow grown with every trophy he adds to his overstuffed cabinet.

I had plans to pull multiple quotes from Foster Wallace's essay to enrich my words but I've decided against it -- other to close my piece as he did.

Congratulations to Roger on a remarkable 1000 wins and to David Foster Wallace: your admiration was clearly not misplaced. May you continue to rest in peace.

The expression of truth and beauty in words as in movement -- mind and body -- has never been more apparent:

Genius is not replicable. Inspiration, though, is contagious, and multiform -- and even just to see, close up, power and aggression made vulnerable to beauty is to feel inspired and (in a fleeting, mortal way) reconciled.