I loathe containers. Not the Tupperware ones for chopped carrots or Ikea storage bins for wool sweaters. I'm talking about those metal, windowless rectangular vats that superheroes fall into from skyscrapers or that transport an international move overseas.

Over the past eight years, my family and I have moved to and from three different countries. On each occasion, a container bursting with accumulated, unnecessary stuff has left a street I loved, traveled on a freight ship across the Mediterranean, and ended up spilling out my old life onto a new street that I grow to love.

I am fully aware of my luxurious problem: a shipped container enables carrying my home with me each time I set up a new house, like a privileged turtle. But every time that anaconda of aluminum rounds the bend of the street that I have to leave, I cringe. To me, it represents change, transition, goodbyes, starting over, and turning a family upside down.

This week, I stumbled upon a shipping container for people, one that spooked me into realizing that a container may represent despair but, in thousands of cases, many migrants also envision it as a symbol of hope for a new life in a greater land. Upon recently visiting the outdoor installation of "Draunara," a shipping container on display at Rome's Museo MAXXI, I was forced to think outside the box while in one.

According to the United Nations refugee agency, more than 200,000 refugees and migrants landed in European countries in 2014 (compared with 60,000 in 2013). Rescue squads collected nearly 130,000 migrants close to Italian shores, where certain pockets of the Mediterranean can, at times, resemble a floating graveyard.

According to the International Organization for Migration, approximately 3,400 migrant men, women and children drowned in the Mediterranean alone in 2014. Furthermore, according to their end-of-the-year study, the number of migrant deaths on land and at sea for 2014 totals 4,868. 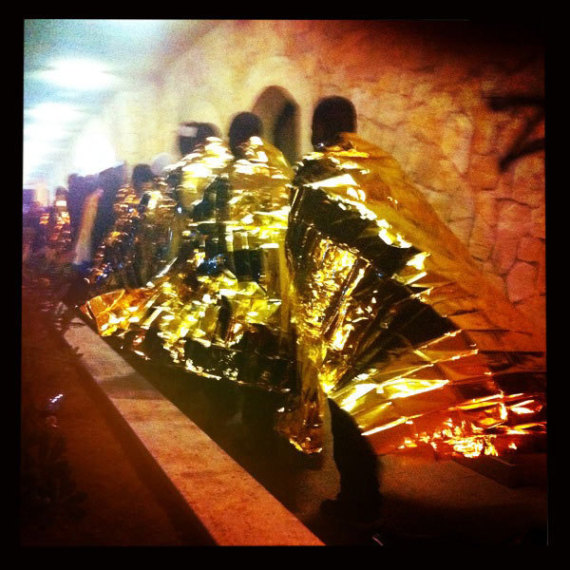 In her MAXXI outdoor installation, artist Federica Cellini has created a solitary container that literally moves with the push and pull of a migrant's uncomfortable experience, forcing visitors to focus on the journey inside the container, before reaching the sea. She takes us on a haunting trip of mass confinement in the dark.

Visitors step inside a single, pitch-black shipping container, in order both to listen to the sounds of a migrant's discombobulating journey from the familiar to the unknown and to view images of his arrival in a foreign land.

Cellini hopes visitors feel disoriented and claustrophobic as they absorb the multi-media installation in the dark. This interactive experience reminds me of walking through the children's memorial of Jerusalem's Yad Vashem in which the names of the 1.5 million children lost in the Holocaust are read out loud within a dark, underground cavern of mirrors lit by a single candle.

In experiencing Draunara, visitors must lean over and poke their head into peep-show boxes, like eighteenth-century photographers snapping an image from underneath a hooded curtain. Cellini worked together with sound designer Aleksander Protic to produce an hour-long playlist of haunting sounds from the African desert to the Mediterranean's shores. The cacophony ranges from voices negotiating the cost of the trip, wheels moving, prayers chanted, water splashing, and, finally, a switchover of language from African dialect to Sicilian slang.

Ten of her photographs depict scenes from the initial moments in which West Africans step foot onto the island of Lampedusa from Libya accompanied by the tempestuous Sicilian draunara windstorm. Cellini was on the small island several times in order to gather footage for a documentary she was helping produce about immigration in Italy. All her photographs featured were taken with her Iphone. Viewers scrutinize them through tiny holes as if examining bugs on a microscope, recalling how each migrant might feel upon first inspection in his newfound land.

In early January of this year, a 49-year-old livestock carrier that flew the Sierra Leone flag arrived on autopilot in Italian waters, carrying 450 people on board, believed to be Syrian. The arrival of this steel-hulled cargo ship has added a new twist to the immigration flow as larger ships are now replacing smaller boats of those in search of new lives in Europe.

The Mare Nostrum program, which evolved out of Italy's reaction to the 2013 Lampedusa tragedy when 350 migrants drowned from a sunken ship, was too costly to maintain for one country. Upon Italy's request that EU nations unite to assume joint responsibility for the immigration issues at stake, the new "Triton" Operation was launched in November 2014, with the participation of 19 Member States under the aegis of Frontex (the European Agency for border management) while Mare Nostrum was phased out. Albeit different from Mare Nostrum in terms of budget and mandate, the launch of the new European operation signifies a milestone step towards more substantial EU cooperation in the field of border surveillance.

Cellini's installation-container made its first appearance at the Mikser Festival in Serbia in 2013 and, more recently, at Torino's Museo di Arte Contemporanea Castello di Rivoli in May 2014. It will be on display at the MAXXI until January 21st as a clunky reminder of how difficult the immigration issue is to capture -- either at sea or in a container.