On the morning of Saturday, August 24, Love Wins Ministries, where I am pastor and director, showed up at Moore Square in Raleigh, North Carolina at 9:00 a.m., just like we have done virtually every Saturday and Sunday for the last six years. We provide, without cost or obligation, hot coffee and a breakfast sandwich to anyone who wants one. We keep this promise to our community in cooperation with five different, large suburban churches that help us with manpower and funding.

On that morning three officers from Raleigh Police Department prevented us from doing our work, for the first time ever. An officer said, quite bluntly, that if we attempted to distribute food, we would be arrested.

Our partner church brought 100 sausage biscuits and large amounts of coffee. We asked the officers for permission to disperse the biscuits to the over 70 people who had lined up, waiting to eat. They said no. I had to face those who were waiting and tell them that I could not feed them, or I would be arrested.

In the past, we have had a good working relationship with the Raleigh Police Department. We knew that we could not use the park itself, as doing so required a permit, but that it was acceptable to set up on the sidewalk, as long as we did not block the sidewalk and cleaned up after ourselves. We have operated, unmolested, under this assumption for the last six years.

By the way, each permit to use the park costs $800. Yes, eight hundred dollars. That would cost us $1,600 every weekend, and the officer we spoke to said the City likely wouldn't approve it anyway.

No representative from the Raleigh Police Department was willing to tell us which ordinance we broke, or why, after six years and countless friendly and cooperative encounters with the Department, they are now preventing us from feeding hungry people.

When I asked the officer why, he said that he was not going to debate me. "I am just telling you what is. Now you pass out that food, you will go to jail." 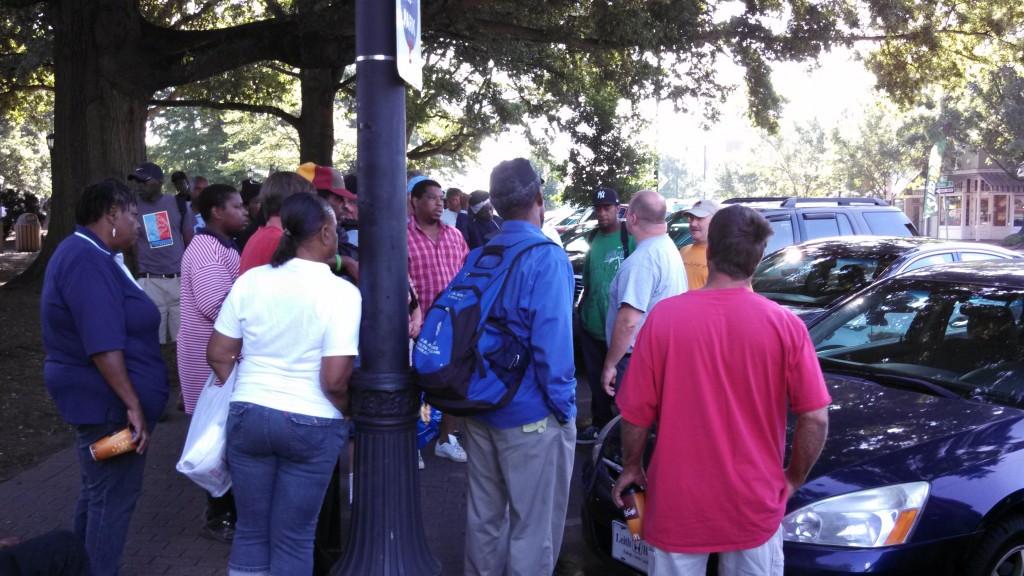 What We Will Do

Simple: we will feed people. I am, after all (however imperfectly), a follower of Jesus, who said himself that when we ignore hungry people, we ignore him.

We knew that with the upcoming revitalization of Moore Square, we would have to find alternative arrangements. We have been working to that end, but as the revitalization is currently unfunded, and has no start date, we felt we had some time.

What We Won't Do

We appreciate all the ways you have written in to suggest that we could subvert the system, but to do that only admits to the City of Raleigh that its argument is legitimate. We maintain that we have done nothing wrong.

We feed people and have been doing so, and much more, for six years. On the weekends people have no where else to go other than the park because Wake County and/or the City of Raleigh offers no soup kitchens or other options on the weekends. None. There is no "official" place you can get a meal if you are homeless or at-risk of homelessness. You are left to your wits, and for the last six years, you could get a cup of hot coffee and a hot breakfast sandwich from us -- because you could not get one from any tax funded location.

We have not hidden. Our work of bringing biscuits to the park has been mentioned in multiple full-page articles in the local paper over the years. We have had countless routine conversations with the police while doing this alleged illegal activity. We do not hide. And while, according to the City of Raleigh, it might be illegal to feed hungry people, it is most assuredly the right thing to do.

Several things. While it was Raleigh Police Department that threw us out of the park and threatened to arrest us, we realize they are acting under orders. Ultimately, they serve the interests of the Mayor and the City Council. In the words of the officer in charge today, "You need to take it up with the City Council."

And if history has taught us anything, it is, as Frederick Douglass said, that "power concedes nothing without demand."

1. Below are the email addresses and phone numbers of the Mayor and of the City Council members. We encourage you to continue to call and voice your concern. We spoke with the Mayor yesterday, and while she did say that no one will be arrested for feeding hungry people in the park, it's important to continue to make your voice heard. The status quo is not acceptable.

Keeping in mind that we win over no one with anger or rudeness. Anger does not cast out fear -- only love can do that.

* Out of town folks, call any and all of the City Council members.

* Raleigh residents, call the City Council member representing your district. You can find your district by entering your address here.

3. If you have contacts with people of influence (media, celebrities, etc.), please pass this story along to them or give them my email address -- hugh@lovewins.info.

4. Stay up to date. The most current information will be on our Facebook page, which you can like to receive those updates automatically.

5. If you're local, attend the public City Council meeting (when it is announced) that will directly address this issue.

6. Pray for our friends who are hungry, and now have nowhere to eat. And pray for us, so that we do not lose our tempers and along with it, our soul. And pray for the officers and people in power, who are working against our goals.

Pray for all of us, in fact, because we all need it, and our liberation is bound up in each other.

In the last 48 hours our blog post about the incident has gone viral -- if you count over 250,000 views as such. The comments pour in faster than we can moderate them. The pressure created by concerned readers has reached the offices of Raleigh Mayor Nancy McFarlane and the City Council.

I spoke with Mayor McFarlane yesterday afternoon. She said that she wasn't aware of the Raleigh Police Department's decision to arrest people sharing food. She confirmed that no one would be arrested for sharing food at Moore Square. I also had a conversation with Mayor Pro Tem Russ Stephenson, who assured me that pending further communication, the City would maintain the status quo of allowing us to serve food on the sidewalk immediately outside the park.

These are positive first steps as we forward with the City of Raleigh, including an anticipated public City Council meeting later this week.

To help answer all your questions, we have composed a list of Frequently Asked Questions About The Moore Square Incident.