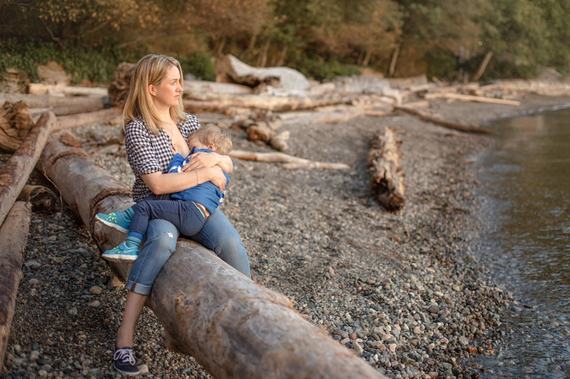 "Done," whispers my sleepy two-year-old. He pulls my pyjama top back across my chest and rolls over on the pillow. He hugs me, and drifts off to sleep. I lay with him in the shadows for a little while. One of the best parts of my day is watching him rest beside me in the quiet black, sated, happy, and secure.

Breastfeeding has given me this gift. This gift of connection. Of love and comfort. My boy and I have done this thousands of times, but still it feels new.

When I think of what my 20-year-old self would think I smile. I never thought I'd breastfeed. And certainly not for as long as I have. But almost 1,000 days in, it has changed me. Softened me. Made me more accepting, patient and calm. I'm proud of women's bodies in a way I wasn't before. I'm proud of my body. Pregnancy changed it. I am in awe of the gift it gave me and the way it continues to nurture my son and keep him healthy and reassured.

"Breastfeeding has given me this gift. This gift of connection. Of love and comfort. My boy and I have done this thousands of times, but still it feels new."

As I lay in the dark, hugging my little man, my mind wanders to a video I watched earlier of Alyssa Milano defending public breastfeeding to Wendy Williams. Wendy is uncomfortable with breastfeeding. Why? Because "she doesn't need to see that." She says she would take her baby to the car to nurse privately rather than breastfeed in public, and she'd expect others to do the same. But she admits it's her problem, stemming from her own insecurities.

It's an age-old human weakness to fear what we don't understand. And to use our own insecurities as reasoning to turn against those who cause us to question them. But does that make it right?

As a fellow mother, I wonder if Wendy would have served her gender, her child and herself more fully by bearing witness to these insecurities in a less damning manner. And offer support to today's women in their right to feed their children as they see fit, even if she made a different choice herself.

But Wendy speaks to a wider social sensitivity. On a United Airlines flight in March 2015, Kristen Hilderman nursed her five-month old baby. In response, a flight attendant suggested she cover her baby by throwing a blanket at her, telling her husband to "help her out." Hilderman shared the incident on social media which went viral and, encouragingly, garnered overwhelming support for nursing her child.

Why is society shaming women for nourishing their babies? Has our world become so artificial we can't appreciate the beauty and innocence of a breastfeeding child?

In Syria, a female member of the ISIS Brigade mutilated and killed a mother who breastfed her child in a public space. The mother was nursing her child, under her burqa, trying to provide comfort following her husband being killed. ISIS Twitter accounts reported the woman mutilated the mother before the execution because she violated "public purity."

"Why is society shaming women for nourishing their babies? Has our world become so artificial we can't appreciate the beauty and innocence of a breastfeeding child?"

Public purity. Is this what it has come to?! How "pure" are public spaces, in a nation slaughtering their own people. But it seems ISIS and Western society may have something in common. Are we proud of that?

We claim to value freedom above anything else. Critics argue it's their "freedom" to sit in a café and not catch a glimpse of a mother's breast. But isn't it a baby's freedom to eat when they're hungry, no matter where they are? And a mother's freedom to care for her baby in the best way she knows how? Who's freedom is more valid? These are questions I find myself stunned to ask.

I'd be lying if I said this doesn't hurt. But something inside me burns with more ferocity than the momentary anxiety caused by a stranger's disapproving glare. I can't deny my son's needs in favor of another's personal insecurities. Can anyone, in all sincerity, argue that I am wrong, when there are women walking around in low-cut tops or hot pants with the full support of modern society, drawing far more attention for far less worthy reasons?

I'm proud of my body. It's the body that enabled me to birth my son into this world, and continues to enable his nourishment and healthy development. The assumption that perhaps I may be utilizing this natural function in order to garner some cheap thrill, shocks me. It's simply not an accusation I ever imagined I'd find myself in defense against.

I try to be discreet, but there are two people involved and babies and toddlers don't always cooperate. They're innocent and follow their instincts without question. They have no idea of the controversy surrounding them having their basic needs met.

"How can it be more acceptable to throw wrongful accusations and hurtful admonishments at a nursing mother, than it is for that mother to be nursing in the first place?"

How can it be more acceptable to throw wrongful accusations and hurtful admonishments at a nursing mother, than it is for that mother to be nursing in the first place?

It's not a question I'll find any lasting answer to soon. Perhaps it's a deeper routed human assignation to battle and divide than it is to nurture and empower. I hope not. But, given the common reactions breastfeeding elicits, how can I not ask the question? Is this really how we want to treat one another?

So, when Wendy Williams suggests nursing in public is offensive and mothers should sit in the car, I'm grateful she was speaking to an empowered, confident Alyssa Milano. Now my son is a little older I don't want to send him a message that what we're doing is odd. Or abnormal. Nothing could be more natural than a child breastfeeding for hunger, comfort or reassurance. Wendy says she has insecurities. I plan to ensure my son doesn't grow up to have the same ones. And nursing proudly in private, or public, is the best way I know how.

Though for tonight my sleepy young son is "Done," I know I'm not. I implore everyone reading this post to consider the value of their judgments, be they for or against public breastfeeding. How can we learn to come together and bear witness to one another's choices from a place of kindness, rather than negativity? I hope you will join me in the daily endeavour of seeking to answer that question.