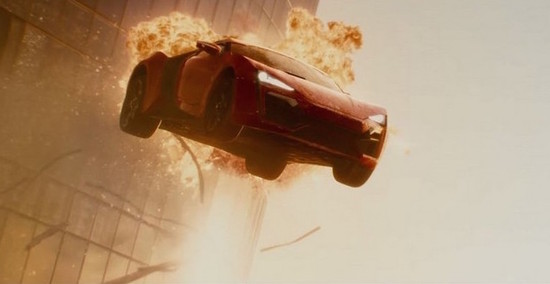 I hover my foot over the accelerator as my hands grip, and readjust on the steering wheel. The desert heat of Abu Dhabi feels trapped inside my helmet, and underneath the protective facemask. Although I turned off the car's a/c, I avoid sweating too much, and instead focus on the lights in front - and the car in the lane beside me. The yellow pre-stage stays solid, until the red light comes to life then the green. My foot slams down, and I begin my fast, furious race.

I feel the need. The need for speed.

OK, so the sentiment comes from Top Gun, but it applies to me after watching Furious 7 as I pursue that need halfway around the world to hop on a Ferrari roller coaster, race cars, and learn to "drift."

Arriving today on home video, the seventh installment of the Fast and Furious franchise is directed by James Wan, and starring Vin Diesel, Paul Walker, Jason Statham, The Rock, Michelle Rodriguez, Kurt Russell, Tyrese Gibson, and a whole lot of other folks. The film follows the collection of characters from the previous films as they traverse the world in pursuit of Statham's vengeance-hungry brother, as well as a flash drive containing a secret computer program.

But really, the big stars of the movie are the cars and the crazy stunts. The blockbuster became the second highest grossing film of 2015 after Jurassic World, and pulled in $1.5 billion worldwide. If that seems like super hero movie numbers, it is, and for good reason. After all, when cars are leaping between high rise towers, airdropping into the desert, or launching at helicopters, it seems pretty super.

Not to mention, it's incredibly infectious.

While not a gearhead, and my knowledge of cars does not involve knowing how to make them fly, much less "drift" and slide on the road, I still "wanna go fast" like Ricky Bobby. I also love a globetrotting adventure, which is how I ended up on a speedy trip in Abu Dhabi.

Home to a major set piece from the movie -- when Diesel's character Dom Lykan crashes the sports car from one of the Etihad Towers to another -- Abu Dhabi is one of those international destinations adrenaline junkies visit to use adjectives such as "largest" and "fastest."

First up, before you can learn to run, you have to learn to walk. Or, more appropriately, I had to learn how to ride fast before I could drive fast. Which is why I ended up at Ferrari World in Abu Dhabi, the world's largest indoor theme park.

The Formula Rossa is the fastest roller coaster in the world. The Ferrari Formula One coaster cars (all red, of course) accelerate to 149 mph in 4.9 seconds, creating 1.7 Gs. Simply put, you're going very fast when you launch 170 feet in the air on the 1.28-mile track.

I love roller coasters, and haven't met one yet that has made me hurl. Still, I am a little nervous beforehand. The ride looks intense, and more than a few people disembark by peeling off the required safety goggles, and promptly lurching over to catch their breath, balance, or lose their lunch. 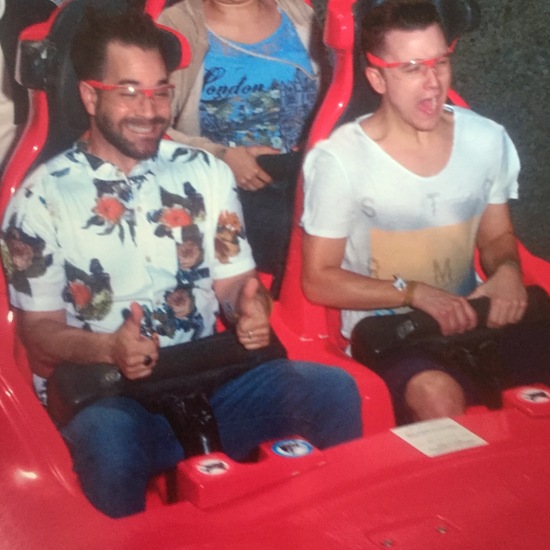 But I love it. It is one of the more insane coaster experiences I've ever had - and obviously the fastest - as the car is slingshot down the track. It is so insane, in fact, that I manage to ride it twice, once in the back row, and once in the front. My advice, should you find yourself at Ferrari World, wait the time for the front row.

Now that I've proven I could handle the speed, it is time to drift a bit to see if I had the chops to join Dom/Vin Diesel's gang.

In case you aren't a professional driver, drifting is when one intentionally loses control of the rear wheels of a vehicle through oversteering while keeping control through the front wheels, which faces the opposite direction of a turn. 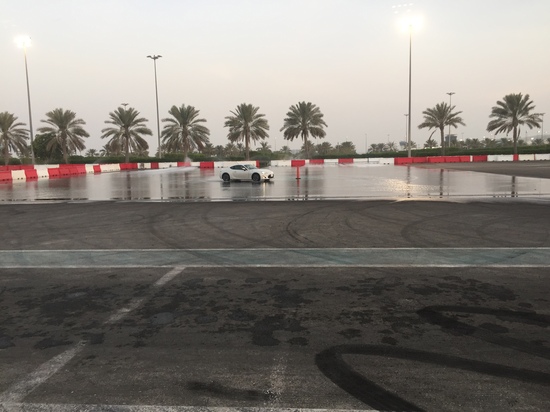 It's a popular stunt in the Furious franchise, and I sort of suck at it.

On a test track at the YAS Marina Circuit in Abu Dhabi, I was supposed to learn some competitive drifting techniques of the Japanese drifting style in the same place where the Drift UAE Challenge is held. But instead, I think I basically do variations of donuts and skidding, and this was when both controlling the car alone, and with an instructor inside.

Here's the deal: I have spent my entire driving life learning how not to lose control, and remembering how to remain cautious behind the wheel of a car. But drifting is something of a calculated chaotic stunt. That sounds like a contradiction of terms, yes? Exactly.

Now, add in a group of spectators and a camera crew, take a vehicle on a track where you're encouraged to slam the accelerator, hit the brakes, down shift, yank the wheel the opposite direction, up shift, accelerate, do the hokey pokey and turn yourself around on wet roads. Basically, it means a lot of moves and a great fear of murdering colleagues (watching literally just a few feet away) and yourself. When it goes right, your car looks as if it is hovering through a turn. When it is done wrong, well, it looks like me driving like a possessed person.

Having failed the drift section of my adventure, and ensuring I'll never be the furious component, I return to what I think I'll love best: The Fast. 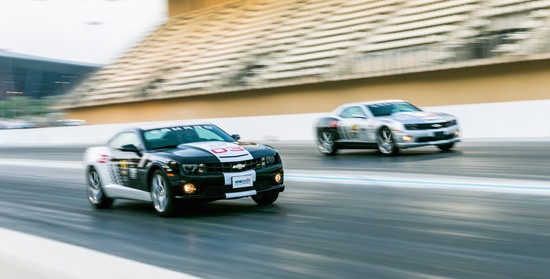 Also on the YAS Marina Circuit is an area where you can race on the same track where the competitive TRD 86 Cup, Formula Gulf 1000, the UAE Time Attack, the NGK Racing Series, and the Middle East Radical Cup are all held.

They allowed me to drive there in a Chevy Camaro SS that goes from 0-60 mph in about four seconds. The YAS Circuit gave me the chance to do a little drag racing and see if I could once more channel my inner Vin from Furious 7. I get it about half right.

As I pull the vehicle around and line it up to the pre-start sensors, activating the yellow pre-stage bulbs on the race track, I hover my foot over the accelerator as my hands grip, and readjust on the steering wheel. The desert heat of Abu Dhabi feels trapped inside my helmet, and underneath the protective facemask. In the car, I'm feeling tense and excited. I am aware that this has to be one of the coolest moments of my life, and it also feels like a gorilla-grunting moment of masculinity.

I click off the car's air conditioning in a misguided attempt to afford me a little extra boost at the right time. And though I avoid sweating too much, I feel the heat pouring into the vehicle. I refocus my attention to the lights in front, and the car beside me. The driver in the other car is a colleague, but he may as well be my mortal enemy. As I re-adjust my hands on the wheel once more, it is as if I've slipped from Furious 7 to Fury Road.

The yellow pre-stage lights stay solid, until the red ones come to life then turn green. My foot slams down, and I begin my fast, furious race. I push hard, and drive a car faster than I've ever done before. It feels wrong, and illegal, and so fun. I remember the voice in my head saying, "Oh, crap" over and over, and the same words escaping my mouth. I shout and swear. And then I win. At least I won the first round, and then we do it again.

On some level, the level that lives within action movies and wants to break the law of speeding and controlled driving, I feel like a rock star. I feel like what it must feel to be Vin Diesel or The Rock. I feel both fast and furious.


Of course, I am just playing pretend, in the end, with very expensive and dangerous toys. Still, it makes me appreciate the Furious 7 appeal in a way that most people don't have a good fortune of doing. On a small, miniscule level, I feel like I have lived the movie (y'know, without the skyscraping jumping).

And at the end of this day of roller coasters, drifting, and drag racing, I realize how tired and stressed I am. What one never quite gets from watching the movie is the toll is takes to actually operate the giant manmade machine of death/transport.

Do I still feel a need? A need for speed? Yes, of course. Would I be just as comfortable satisfying that need by watching a movie instead of living it? You can bet your candy-colored red cars I will remain more curious than furious. 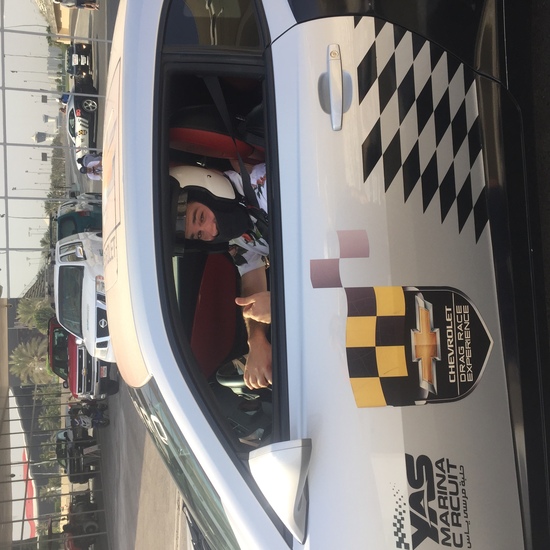 More:
travelfast and furious 7abu dhabi
Newsletter Sign Up
An essential daily guide to achieving the good life
Subscribe to our lifestyle email.
Successfully Subscribed!
Realness delivered to your inbox