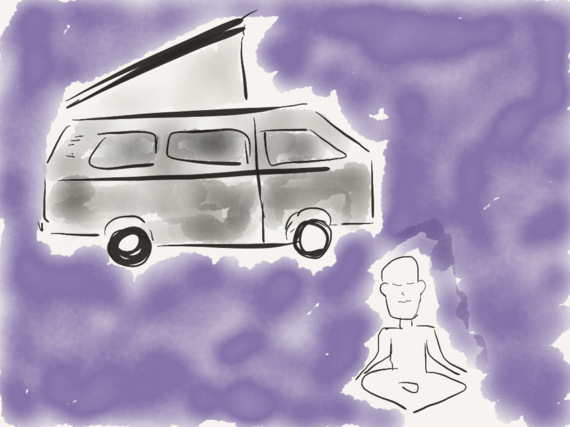 As we turned onto the picturesque Highway 1 to drive from Santa Cruz to San Luis Obispo, I was staring at a gorgeous vista, puttering along in my dream car - a 1988 VW Westy -- yet found myself in an utterly foul mood - short-tempered and fuming. We had just had another fight at lunch when we stopped for burgers (her request) which she hardly touched. I was exhausted -- partly from driving, but mostly from days of negotiating with my four year old daughter.

On a few good days, meditation helps me notice the "space between stimulus and response." My daughter pushes my buttons, I notice how it feels in my body, and I respond; skillfully jujitsu-ing to the next activity. But clearly, that was one of those other 360 days of the year.

I'm a software engineer; it's how I've paid the bills for over a decade. But in addition to writing software for Google, I've devoted part of my work time in the past two years to teaching mindfulness to my colleagues -- one of the most fulfilling things I've ever done. At the beginning of May, I quit my engineering job to teach mindfulness, meditate, and spend more time enjoying the outdoors with my family.

So, on a recent morning I worked in my daughter's co-op preschool and then the two of us drove straight to a beach campsite in Santa Cruz. It was a trip we were both looking forward to and we bonded over the course of the four days as we drove, cooked, played, and hung out. 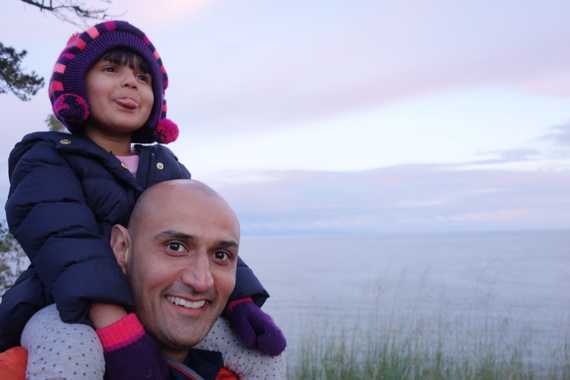 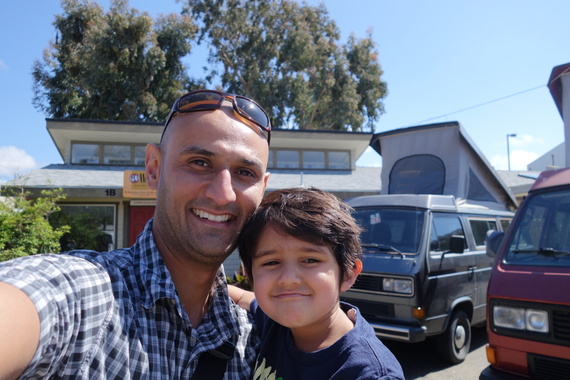 But that's not the complete story. Getting her to eat dinner in a reasonable amount of time was near impossible. When I finally gave up trying to get her to eat, she threw a fit because she was "really hungry but didn't like eating". She didn't want to wear warm clothes even though she'd been sniffly the previous week and Santa Cruz was cold that weekend. She didn't want to hang out by the campfire (because that involved dressing a little warm), and insisted on playing in the van. She wanted to eat breakfast on the backseat, where I knew she'd drop crumbs and spill milk.

We got to San Luis Obispo two days later where yet another tiff ensued while brushing her teeth. I can't even remember what it was about. A fellow camper, who I'd seen earlier with his grandson, walked into the restroom as we were arguing. Before leaving the restroom, he gave me a nod, a "you take care now", and a lingering look dripping with judgement. My heart sank and I felt my ears burn.

Soon I passed out exhausted even before my daughter fell asleep, but at night I was haunted by deep shame and guilt.

I've taught several hundred coworkers in Mountain View, Dublin, London and Tokyo about how how mindfulness can help with self regulation and empathy. I just left my job to try to share this work more widely. And yet here I was snapping at my wonderful, bright-eyed, loving, four year old daughter. Bullying her to make our trip be a certain way. Not giving her the space to be her own person. Not realizing that her acting out may have been the beginnings of sickness (a fever kicked in a little after we returned). I felt like a fraud. What good is meditation if it doesn't make me a good father, a good husband, a good person?

Even remembering it a few weeks later is making me flush.

So what good is meditation on those other 360 days of the year?

Mindfulness teaches us to accept reality as it is right now, not as we wish it to be; to observe the good without grasping at it, and the bad without pushing it away.

And so it was that I found myself in seated meditation in the back of a Westy at 3am on a Friday night:

Observing the depths of my human-ness in all of its ugliness and imperfections.

Noting the guilt and shame as they crawled under my skin and clawed at my heart.

Feeling the burn as my eyes welled up with regret.

Accepting all those as a part of me, whether I liked it or not.

Congratulating myself for attempting four days of camping alone with my four year old.

Thankful for the wonderful bonding and precious memories that resulted from it.

Reflecting on my trigger points in the hopes of coping better next time.

Respecting her as a person, like me, just trying to be happy.

The burden of the shame feels lighter, and I certainly feel brave enough to write about it. I've since shared the story with fellow parents, as well as while teaching a class. Both times people shared similar stories back with me.

Coming face-to-face with the suffering inside of us is an important part of realizing that you and I are not as different as we might think.

It's not much, but for me it's a small but powerful endorsement for meditation.

More:
healthy livingParenting parents-dadsMindfulnessMeditation
Newsletter Sign Up
The essential guide to taking care of your mind and body
Subscribe to HuffPost’s wellness email
Successfully Subscribed!
Wellness delivered to your inbox