If you don't vote for Hillary on November 8th, you may never vote again. 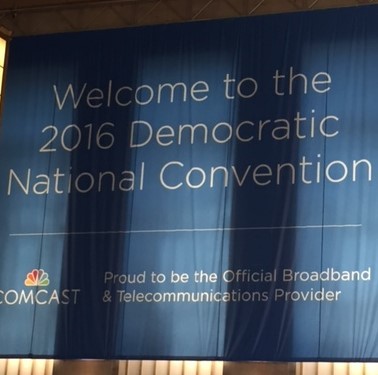 As I recover from sleep deprivation from the week at the Democratic National Convention in Philadelphia, thoughts have been swirling through my mind, and I feel the need to put them to paper. Some are priorities for us all over the next 100 days; others would be important under normal conditions, but these aren't normal conditions. I'll put them out there while they're still fresh, for later referral when the future becomes clearer.

• November 8th is a potential Extinction-Level Event. Applying the Precautionary Principle, to preserve a constitutional republic, Americans must vote for Hillary Clinton.

• It matters not what one thinks of Hillary - love her or hate her, respect or disrespect her. Fundamentally it is not about Hillary. However much status quo the next four years might bring, the potential for change would remain. It is up to us to fight for the change in which we believe, and not just every four years from outside the party.

• In one of the more ironic twists of this election season, the Democrats have become the party of American exceptionalism. The Kahn family, which gave the most powerful presentation, in my mind, during the Convention, amidst the powerful speeches of the Clintons, Bloomberg, POTUS, FLOTUS and VPOTUS, represents the exceptional possibilities America represents to the world.

• In another ironic twist the Democrats now are the party of the American military, the arena resounding with chants of USA! USA! In support of our troops and military campaigns (to the consternation of many Sanders delegates).

• The Clinton campaign got a typical post-convention bounce; the Republicans got the first negative bounce in the history of such Gallup polling, and it was a huuuuge -15.

• All of these points need to be emphasized as we move forward, with clips from the speeches of former NY mayor Bloomberg, the Khan family, the First Lady referencing that slaves built the White House, etc. These need to be promoted as the party continues to reach out to disaffected Sanders supporters, many of whom have never voted before, some too young to have voted before.

• Bernie paid back the Democratic party with respect for allowing him to participate as a Democratic candidate. It may have taken too long, but he came around, spoke forcefully about the need for his supporters to vote for Hillary (there is no other alternative), and then exhorted them to get involved in state and local politics next year to make the remarkably progressive party platform a reality.

• For all of Bernie's talk of "our revolution," (at least he spoke in the plural), America is a non-revolutionary, non-ideological nation. The Clintons represent the best of that non-ideological, pragmatic bent towards public policy. As we approach the centenary of the Russian Revolution and Bolshevik coup, it behooves us to keep that in mind. We may be plodding, but much less blood gets spilled. We take to the streets when unarmed black men are gunned down, or four students at Kent State University are killed; in revolutionary states like Soviet Russia and Nazi Germany hundreds of millions are ultimately killed in the pursuit of unattainable utopian ideals.

• I was simultaneously impressed with the passion and commitment of the Sanders delegates, and the appalling way some acted to disrupt the Convention. I had many interesting discussions with younger delegates, whose progressive principles give me hope for my children's future. I was disgusted that some groups of delegates deliberately refused to shower and change their clothes all week, and another group urinated in the public bathrooms of the Marriott in Center City as a protest within the California delegation. Cheri Honkala, the Green Party 2012 VP candidate, tried to organize a "fart-in" in the arena. In a year when childish tantrums are the tactics of the Republican nominee, we don't need the same on our side.

• While I'm told the Convention was a success from the perspective of its role as a major television production (which is the main point), the view from inside the arena and the city wasn't always as sanguine. Control over access to seats and to the arena in general was problematic, as usual, and needs to be improved. Security, understandably intense, was too much so, particularly given the sun and heat which made getting there are real struggle for many older guests. The subway was diverted on Monday without warning, making access even more difficult, and cabs often dropped people off two miles away and left them without any help in finding their way. The food ran out too early; the bathrooms were, remarkably, more than adequate (although conservative media seemed confused about how to evacuate in a gender-neutral bathroom).

• What was this fast food doing at a Democratic convention? 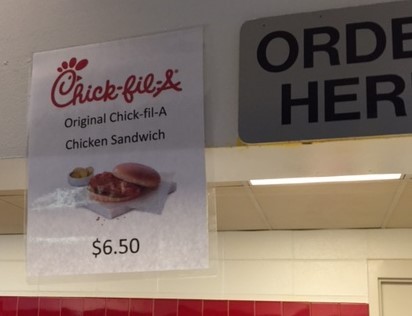 • The fear of left-wing disruption led to a limitation of information, with lists of events and parties being held close and disseminated late, if at all. This created an aura of elitism around the event, which impacted hotel accessibility as well as access inside the arena. Not the impression one wants to give to a younger, highly frustrated generation of activists already turned off by the corporate nature of the upper echelons of the party. Given that the cost of attending was way too high for many Democrats in general, greater effort needs to be made to become more welcoming.

• Being in the arena for four nights I saw that this party had truly become a mosaic. One didn't need to compare it to the Republicans' convention the week before. It was real; it felt natural and normal. As I mentioned last week, unlike 2012 when there were more rainbow flags in the hall than American flags, this year the LGBT events seemed no different than those of the other communities. The trans caucus event was an afterthought, unfortunately, and the Equality Forum events throughout the week were almost completely trans-free, but somehow it didn't seem to matter. There was even a Human Rights Campaign-promoted trans speaker, a first for any party (while Caitlyn got to hang outside in Cleveland).

• Local politics continued as usual, with only a few attendees noting that there may not be state and local elections in 2018 should Hillary lose. In the Maryland delegation, there were multiple events put on by 2018 gubernatorial candidates, including the bussing up of a contingent of activists for "Maryland Day." Walking the streets of Center City (I had attended med school in Philly so I was comfortable navigating) I noticed a host of other such events from around the country. There were multiple opportunities to meet, in very informal settings, Congresspersons and Senators I had lobbied over the years, governors and former elected who needed to eat and hydrate like the rest of us. I even had the opportunity to thank Dan Rather for fifty years of investigative journalism.

To me the takeaway remains - for the first time during my life, and arguably since 1860, the future of this nation built on the principles of life, liberty and the pursuit of happiness is at risk. Khizr Khan has been making that point since Thursday night, not only on behalf of his son, Captain Khan, but of all those who have for generations come to America in the hope of living in freedom.

In spite of the convention bounce in the polls, and the odds of 65-70% in favor of a Democratic victory in November, we cannot let down our guard. We must work down ballot as well, "Don't boo - Vote," and while we need to laugh at the other side in order to stay sane, we need to remain committed to getting the job done. Captain Humayun Khan died to protect his men; we have to campaign to protect our Republic.