You walk into the place and somehow just feel at home. It's a dive bar for sure -- stickers cover the wall behind the beer taps and bric-a-brac is everywhere -- but for some reason you can easily spend an entire day here.

The Waterfront Bar and Grill in San Diego has been making people feel this way since it opened in 1933. 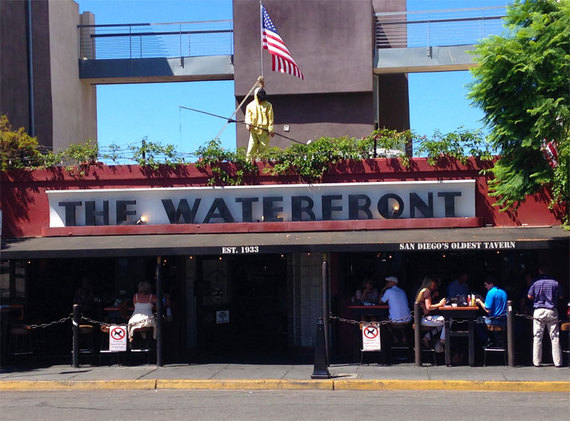 Sitting on Kettner Boulevard, in the popular Little Italy district, and surrounded by condos and restored buildings, it's clear that the bar has been here awhile (in fact it holds the city's oldest liquor license).

And it's crowded -- always crowded. When we visited early in the day the patio seating was already gone and there was little room at the bar. If you walk around you'll find a dining room in back with a few scattered tables and televisions tuned to sports shows.

But the fun place to sit is up front, where everybody walks in and you can scan the crowd, the shoppers and the tourists walking Kettner outside. 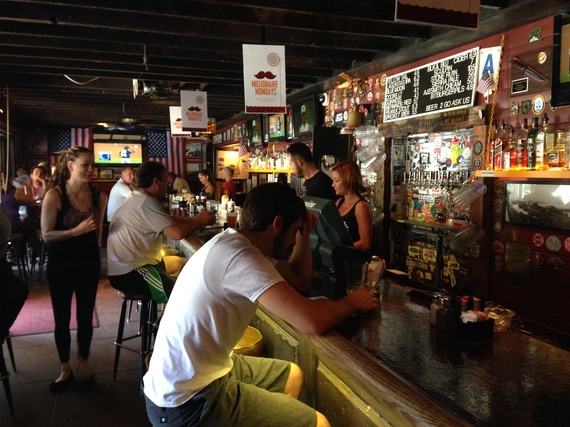 There's a trophy swordfish on the north wall and pictures of the Waterfront from bygone days. Fishing nets and model ships recall the past of the area and the bar. Though now it's lined with shops and trendy restaurants, Little Italy was no more than a fishing village when the Waterfront opened. Sicilian fishermen would mend their nets outside the front door, and then retire to the bar for drinks and cigars. But much of the that is gone now.

The fishermen have been replaced by professionals (young and old), tourists, military personnel, college students and just about every kind of person you can imagine. Rocky, one of the owners, told us that on Friday nights you could see a judge and attorney drinking at one end of the bar, and a college kid celebrating his 21st birthday at the other end.

It seems a bit sad when a neighborhood or district changes so much. In other cities this happens too, and typically when it does you're forced to say goodbye to the local watering hole that holds so many fond memories.

Fortunately, the Waterfront has remained.

Something else that remained is that sense of welcome. We were told by customers who'd been coming here for 35 years that the people are friendly and non-judgmental, and that it's always been that way. Why? They're not sure. Some said it was because the staff was so nice, others point to the warm smile of Nancy Nichols, co-owner and grandmother of the other two owners, Rocky and Chad. 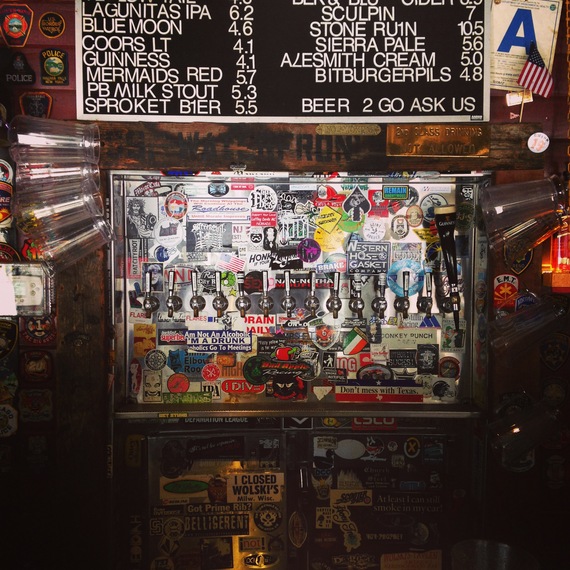 Whatever it is, it works. We went back on a Friday night and the place was quite literally wall to wall with customers. The crowd was as diverse as promised -- older professionals, young college kids and people in between. And it was clear they were enjoying themselves.

There are those neighborhood dives you go to and feel out of place. Regulars -- people who live locally -- eye you up and down and the bartender takes her time getting your drink order. You sit alone or with a friend and can just sense this eerie awkwardness. So you finish your drink a little too fast and leave.

The Waterfront doesn't do that. Instead it invites you to sit as long as you want -- maybe a little too long -- and just enjoy the place, the crowd and the experience.

We certainly did, and we can't wait to go back and enjoy it all again!

Here's a brief documentary of the Waterfront -- its history and a tour. Enjoy!

When to go
There's not a bad time to go, after all it is San Diego so there's no inclement weather to worry about. However, if you have the chance try to go on a Friday night, after people have gotten off of work and are starting their evenings. The place buzzes with a fun energy that is absolutely contagious. Also, they hold their annual birthday bash on December 5th (Repeal Day) every year.

What to eat
Their food is pretty standard pub grub -- burgers, sandwiches, etc. We tried a cheeseburger and their fish and chips. Both were well prepared and made from scratch in house.

What to drink
They have a pretty good local craftbrew selection and a full bar. The owner, Nancy, is pretty fond of a drink called a Purple Hooter, a concoction of vodka, Chambord & soda, so we'll declare it their signature drink.

What's nearby
You're in the middle of Little Italy, filled with shops and boutiques as well as great Italian restaurants. The harbor is two blocks west, so you can explore old sailing vessels, retired US Navy ships and the Maritime Museum. Also, the Seaport Village is about 2 miles due south.