UPDATED BELOW: Sens. Feingold and Chris Dodd have announced their intent to "oppose efforts to end debate" on the FISA bill headed to the Senate for consideration. Scroll below for the full text of their joint statement.

If you are a hardcore civil libertarian -- the kind of citizen whose heart rate goes up at the mention of obscure legislative acronyms like FISA (the Foreign Intelligence Surveillance Act) or PAA (the Protect America Act) -- then Sen. Russ Feingold is one of your heroes. His unwavering commitment to first principles has left him on the solitary end of many a vote in the Senate, where he was the lone voice of opposition to the Patriot Act's debut incarnation.

But even as his national constituency thrills to Feingold's gadfly voting record, the important question to ask is why, with Democrats now in control of Congress, he still finds himself alone so frequently. Or, more accurately, why the Democratic caucus is so often split on national security votes.

As FISA returns to the Senate this week -- now with a near-certain immunity clause for the telephone companies that aided President Bush's warrantless wiretapping program -- Feingold himself said Monday that he expects to lose "too many Democrats" to the Republican block in the Senate.

"I'm blue in the face already," he told a gathering at the New America Foundation in Washington, D.C on Monday. "We're gonna fall over on this and I'm very unhappy about that."

The cynic's explanation for the "falling over" phenomenon holds that, on any national security issue, there are enough Democrats who are nervous about being painted as weak -- or who actually are not conflicted in the slightest about valuing security over civil liberties -- that they can be easily peeled away from their caucus in order to give united Republicans a filibuster-proof majority, despite the fact that the GOP no longer controls the Senate.

That intellectual state of affairs in the Democratic Party amounts to an either-or choice between viability on matters of civil liberties or national defense. In the post 9/11 era, it's a decision that has appeared to be a slam dunk in favor of the latter. Instead of trying to make the argument in reverse, it's clear that Sen. Feingold is now trying to do away with that unappealing dichotomy once and for all by staking out new ground on the security frontier.

To demonstrate how the two priorities are not mutually exclusive, Feingold has picked this week to roll out new legislation, co-sponsored by Republican Sen. Chuck Hagel, to create an independent commission to investigate and improve the nation's intelligence gathering operation. The significance of the timing is unmistakable, as Feingold is virtually certain to kick up a stink in the Senate over FISA at the same time he's rolling out his new proposal.

The implicit message: you can stick up for civil liberties and national security simultaneously.

Should the Feingold-Hagel commission on intelligence ever come into being, the Wisconsin Democrat believes it will note how the Bush-era view of foreign intelligence as principally derived from clandestine operations has short-changed America's ability to exploit non-covert diplomatic reporting and what Feingold calls "open source information" available by simply having a presence in any given country.

Describing a 2001 congressional trip to Nigeria, Sen. Feingold recounted seeing postcards of Libyan leader (and then official terrorist) Moammar Ghaddafi and Osama bin Laden selling briskly on the Muslim street (literally). "'I want to get briefed on this,'" Feingold said he told his staff at the time, adding that the northern town was an important city in Islamic history, sitting on a major trade route, but had no U.S. consulate with "ears on the ground."

Feingold's briefing on regional sympathy for bin Laden was scheduled for Sept. 13, 2001.

But by simultaneously invoking the specter of America's unpreparedness before 9/11 and what he calls its "distraction" in Iraq starting in 2003, Feingold is hoping that a critique of the Republicans' handling of security issues will not block out from the public's mind his own proposals for making America stronger in the fight against terrorism.

As The Huffington Post has previously reported, many progressive scholars and foreign policy analysts are hoping that more Democrats will stop running from the fight with Republicans over national security -- no less an authority than Gen. Wesley Clark said he saw Democrats creating a more "full-service party" on security issues -- but while these figures may all hope for this change or sense some ground shifting, as yet there's little empirical evidence to validate those positions.

Indeed, two recent polls conducted by Gallup reveal the strange position that Democrats still find themselves in on security issues. In mid-May, the firm found that a majority of Democrats and Independents (as well as nearly half of Republicans) thought it would be "a good idea for the president of the United States to meet with the president of Iran" -- an idea that sounds very close to a plank in Barack Obama's national security platform. 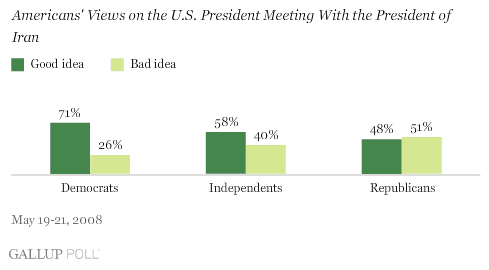 Given that the issue of diplomacy with Iran has been one of John McCain's favored bludgeons over the past few weeks, you might expect Gallup's polling to show that the same Americans who support Obama's policies might view McCain as less well equipped to handle the threat of terrorism overall. Not so. In a June Gallup survey, McCain's only issue area of dominance was on the question of which candidate would do a "better job" on terrorism, on which he beat Obama to the tune of 19 points. 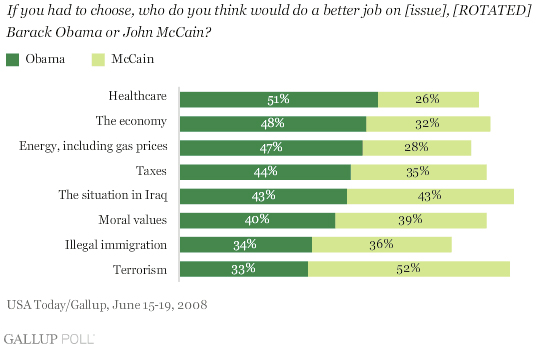 What this suggests is that while the Democrats' hoped-for resurgence on national security could possibly be underway, it has thus far failed to materialize in the electorate.

Still, the maverick Feingold is set to chip away at the existing stereotypes Democrats face on national security. Just because he's trying to gain traction as a thoughtful proponent of stronger intelligence gathering doesn't mean he'll hang up his spurs on the FISA bill when it passes back through the Senate. Asked after his Monday address whether he and others might mount a filibuster on FISA, Feingold ducked the issue deftly by saying "I'm not in a position to talk about exactly what's going on with that in the committee." [See update below: Feingold and Dodd have revealed that a filibuster is a possibility.]

Still, he noted that both he and Senator Chris Dodd met with Senate Majority Leader Harry Reid last Friday and indicated their joint desire that "this thing not just be jammed through." According to Feingold, "we will be requiring key procedural votes," he said, "and also be taking some time on the floor this week to indicate the problems with this legislation. We're not just going to let it quickly pass."

UPDATE: Here is the full text of a joint statement issued by Sen. Feingold and Sen. Dodd on Tuesday afternoon:

"This is a deeply flawed bill, which does nothing more than offer retroactive immunity by another name. We strongly urge our colleagues to reject this so-called 'compromise' legislation and oppose any efforts to consider this bill in its current form. We will oppose efforts to end debate on this bill as long as it provides retroactive immunity for the telecommunications companies that may have participated in the President's warrantless wiretapping program, and as long as it fails to protect the privacy of law-abiding Americans.

"If the Senate does proceed to this legislation, our immediate response will be to offer an amendment that strips the retroactive immunity provision out of the bill. We hope our colleagues will join us in supporting Americans' civil liberties by opposing retroactive immunity and rejecting this so-called 'compromise' legislation."