A pro-gun non-profit has created the world’s first 3-D printable magazine for an AK-47 assault weapon and decided to name the ammunition after Sen. Dianne Feinstein (D-Calif.), a staunch proponent of stricter gun control.

Defense Distributed creates digital firearm blueprints that are free to download and can be used to print guns on a 3-D printer. It's calling its newest printable ammunition the “Feinstein AK Mag.” (Hat tip: Business Insider)

Scroll down to see an image of the Feinstein AK Mag and a video of it being used.

Cody Wilson, the 25-year-old founder of Defense Distributed, said the magazine’s name is a symbol of what’s happening in Washington and reflects the group’s belief that Feinstein’s proposed ban on assault weapons will fail.

“We want to commemorate a personal failure of Feinstein’s to take away semi-automatic weapons,” Wilson, who is also a law student in Austin, Texas, told The Huffington Post.

Feinstein introduced legislation in January that would ban more than 150 types of assault weapons, along with certain high-capacity gun magazines, including those that feed bullets into an AK-47.

But those familiar with 3-D printing have pointed to the technology as a way around such regulations. “Restrictions are difficult to enforce in a world where anybody can make anything,” Hod Lipson, a 3-D printing expert at Cornell University, told the Washington Post. “Talking about old-fashioned control will be very ineffective.”

Rep. Steve Israel (D-N.Y.) suggested a ban on 3-D printed guns in a recent speech calling for a renewal of the Undetectable Firearms Act, to which Defense Distributed responded, "good f***ing luck."

In January, state lawmakers in New York banned magazines that hold more than seven rounds. In response, Defense Distributed began testing a printable 30-round magazine for the AR-15 rifle and named it the “Cuomo” after the New York governor. Gun hobbyists have since replicated the group’s design.

DEFCAD launched in December after Makerbot, a creator of 3-D printed items, began enforcing its ban on gun components. Since then, users have downloaded DEFCAD gun design files over half a million times, according to Wilson.

“The message is in what we’re doing,” Wilson said in an interview with Ars Technica earlier this month. “The message is: download this gun.”

Here's an image of the Feinstein AK Mag: 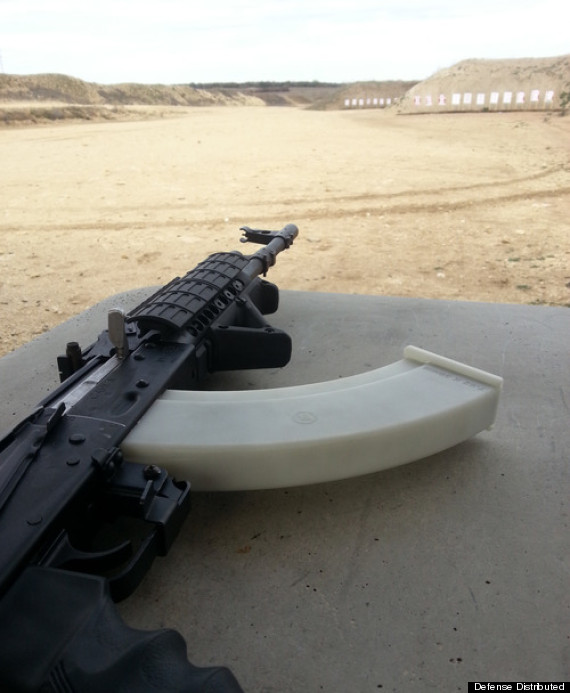 And here's a video of it being used: